The protest comes just one day after Sen. Manchin, had caved to Sen. Majority Leader Schumer, and threw his support behind the Inflation Reduction Act that included Democrat wishlist items to address climate change. 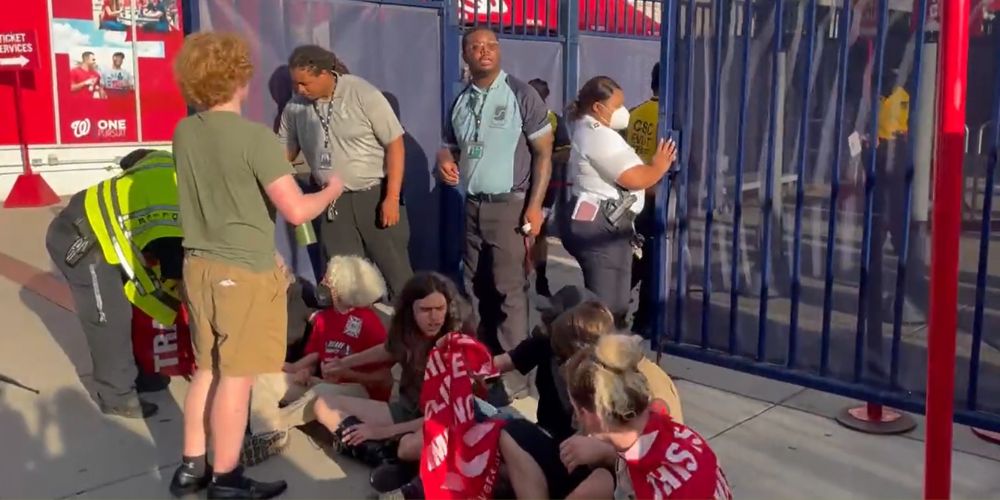 Three protesters were arrested Thursday evening after blocking one of the entrances to Nationals Park during the 87th annual Congressional Baseball Game in Washington, DC, as activists demanded lawmakers address climate change.

A group of climate activists sat down outside the gates of the stadium chanting "shut it down," and held signs that read "This is a climate emergency" and "Democrats: Seal the deal on climate!"

Protesters accused the US of prioritizing corporate interests and demanded that President Joe Biden declare a climate emergency.

The package included spending approximately $370 billion on climate and energy programs over the next 10 years, such as tax credits to incentivize the purchase of electric cars, funding the domestic manufacturing of batteries and solar panels, and spending for other environmental initiatives.

A spokesperson for the Metropolitan Police Department told Fox News the protesters were arrested for unlawful entry.

Over 300 people had RSVP to attend the protest but only about 75 showed up.

Chesapeake Climate Action Network Director Mike Tidwell said in a statement, "We have decided not to protest tonight's Congressional Baseball Game. Congressional leaders have declared they intend to meet many of our climate and justice demands, so we'll be attending the game tonight just to urge Congress to seal the deal and to ask Joe Biden to still declare a climate emergency."

US Capitol Police Chief Tom Manger stated Wednesday that unlawful activity wouldn't be tolerated. "We are aware that demonstrators are planning to protest political issues at the Congressional Baseball Game for Charity. Our mission is to protect the Members of Congress during this family event, so we have a robust security plan in place."

He added, "We urge anyone who is thinking about causing trouble at the charity game to stay home. We will not tolerate violence or any unlawful behavior during this family event."

The annual charity game between Republicans and Democrats continued as scheduled, but was briefly delayed due to rain. Republicans shut out the Democrats 10-0 for their second consecutive win.

The GOP touted that the victory foreshadows a red wave in the coming midterm elections as the Republicans hope to win back control of one or both chambers of Congress.

"This 10-0 shutout at the #CongressionalBaseballGame is only a preview of what's coming in November!" the Republican National Committee tweeted.

Though the festivities are usually good-natured fun, at least one Democrat appeared to not cope well with the loss. Rep. Linda Sanchez (D-CA), was caught on camera flipping the bird to the Republican dugout as she was being replaced by a pinch runner.

Sanchez's stunt came five years after a left-wing activist attempted to assassinate Republican lawmakers at one of the practices before the game. The terrorist shot five people, including Rep. Steve Scalise (R-LA). Scalise fully recovered and played in his fourth straight Congressional Baseball Game Thursday night.

Scalise wrote on Twitter Thursday, "5 years ago my colleagues & I were attacked playing baseball—because we’re Republicans. We didn’t let it stop us then & nothing will stop us now. It’s been a long journey, but tonight we play the Congressional Baseball Game—5 years stronger."