WATCH: CNN's Chris Cuomo, whose brother has been accused by 9 women of misconduct, says Matt Gaetz would be a 'dead man' on the left 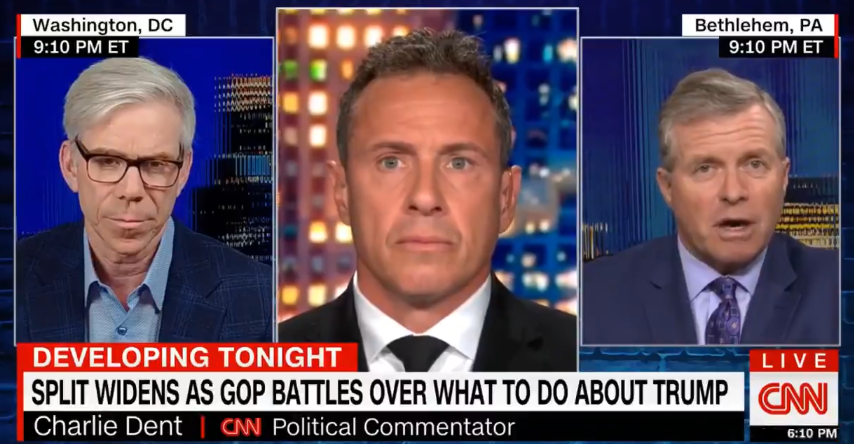 Chris Cuomo dug into the sex scandal surrounding Florida Republican Representative Matt Gaetz on his Tuesday night broadcast, but only on the surface, because, according to Cuomo, that's basically all that matters on the left.

If he was a Democrat, Cuomo said, "he'd be a dead man on the left. Because it's all about optics."

"This is a party that will hang with Matt Gaetz—and I'm all for due process—but he’d be a dead man on the left. Because it's all about optics. But here, they stick with him, they stick with the QAnon kook, and they kill Liz Cheney. So, if you're a moderate, if you put your toe in the pool… aren't you a dead man walking?"

It is worth noting that Cuomo's brother, New York Governor Andrew Cuomo, has been accused of sexual misconduct by 9 women and is currently under investigation by New York State Attorney General Letitia James' office.

Cuomo was talking to guests about what so many are talking about, the split in the GOP. There's the Liz Cheney faction, and the Kevin McCarthy faction, and while the former has staked her claim to representing the old guard, the pre-Trump conservatives, the new crew is taking their lead from the masses of Americans who voted for Trump.

In the summer of 2020, Gaetz had suggested that Cheney be removed as party chair. At that time, Cheney had far more support among Republicans. As for CNN, they have taken an active roll in discrediting Gaetz.

Gaetz's sex scandal, which would have been incendiary on the left, especially given that sitting senators like Al Franken were run out of office for far lesser infractions, has barely made a blip on the conservative side. Governor Cuomo's resignation has been demanded both by those on the right and left. He has declined to resign however.