CNN Cooper featured now arrested Black Lives Matter activist John Sullivan on his show as a witness to recount his experience within the Capitol Hill riot. 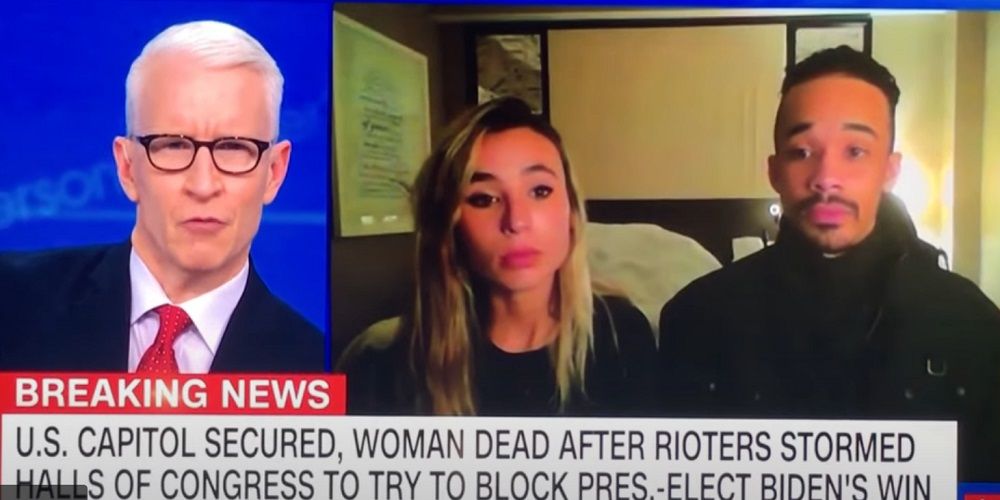 CNN's Anderson Cooper featured Black Lives Matter activist John Sullivan on his show last week, as a witness to recount his experience within the Capitol Hill riot. Sullivan was arrested Thursday for participating "knowingly and willfully" in illegal conduct when he breached the Capitol and previously claimed he was only there to "document" the event.

Sullivan described to Cooper what he saw during the riot on Jan. 6.

"There were about 4-5 police officers spread out in the forefront. And I remember just looking up and seeing one of them like crying, saying they want to go home to their kids," he recounted.

"By no means am I there on the Trump side or the MAGA side but I don't want to see people get hurt unnecessarily," Sullivan clarified on CNN.

Sullivan was arrested Thursday for allegedly inciting violence during the riots as well as participating in disorderly conduct while inside the Capitol, a sworn affidavit stated. He previously claimed to be only documenting what was occurring at the Capitol and said he was not an active participant in the riot.

In video footage he took while at the riot, he is heard egging on the crowd to commit destruction and violence.

According to the affidavit, "After the crowd broke through the last barricade, and as SULLIVAN and the others approach the Capitol Building, SULLIVAN can be heard in the video saying at various points: 'There are so many people. Let’s go. This shit is ours! Fuck yeah,... We accomplished this shit. We did this together. Fuck yeah! We are all a part of this history,... Let’s burn this shit down'"

The affidavit continued, "As individuals are climbing the wall [of the Capitol], SULLIVAN can be heard saying, 'You guys are fucking savage. Let’s go!'"

Sullivan is a left-wing activist associated with the Black Lives Matter movement and is reportedly the founder of Utah based extremist group Insurgence USA, which promoted an event called "Kick These Fascists out of DC" on the same day as the riots.

He was arrested and charged in July 2020 over a BLM-Antifa riot where drivers in Provo were threatened and one was shot, DeseretNews reported. Sullivan was booked into the Utah County Jail at the time for investigation of rioting, making a threat of violence, and criminal mischief.

A group calling itself Back to Blue planned to drive around the Provo Police Department and honk their horns to show support for law enforcement. Counter-protesters did not obtain a permit for their opposing event yet Sullivan rallied participants on social media. The demonstration blocked vehicular traffic.

Two handguns were brandished and two shots fired toward a motorist. Vehicles were damaged by protestors and Sullivan himself.

"As a protest organizer John Sullivan is heard and seen as he is promoting protesters to block roadways, keeping motorists from traveling lawfully and freely," the police affidavit reads.

Sullivan was also captured on video threatening to beat a woman in an SUV and then kicking her door, leaving a sizeable dent.