"The cartoon was not promoting hate or violence to any community, but merely highlighting the harmful excesses of trans activism that denies biological reality and infringes upon the rights and safety of other groups." 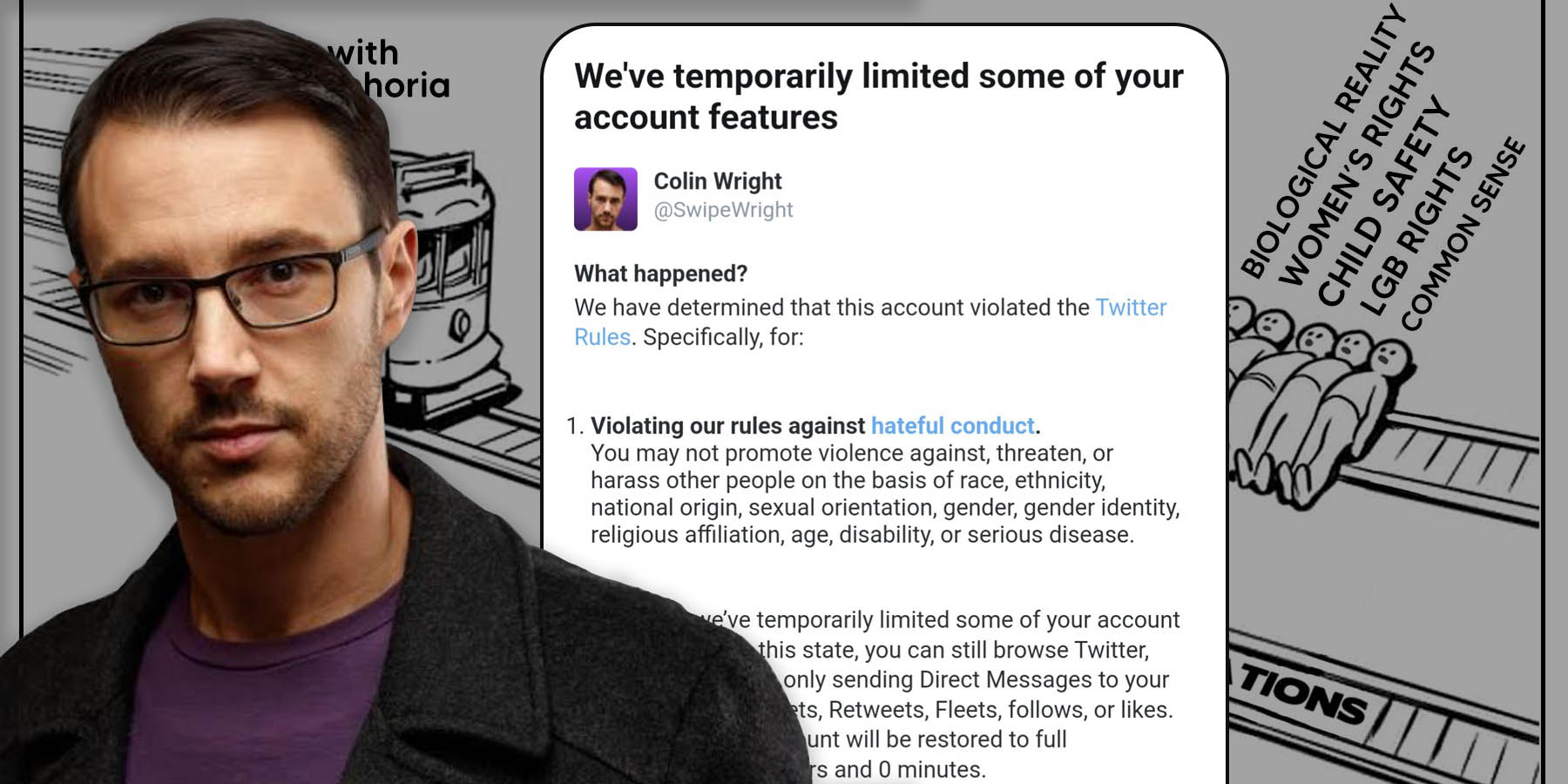 Evolutionary biologist Dr. Colin Wright was suspended from Twitter on Sunday morning for a cartoon depicting a famous philosophical thought experiment called the "trolley problem." Wright received notice from Twitter describing the offending tweet as "hateful conduct" that he must acknowledge he violated their rules of conduct if he wishes to regain access to his account after a 12 hour time-out.

When Wright shared the cartoon by itself on Friday with the caption, "Trans activism in a nutshell," it went viral and drew the attention of trans activists who reported the cartoon to Twitter.

The cartoon was created initially as cover art for an article by Eliza Mondegreen on Wright's publication, Reality's Last Stand, titled "Trans Activism and the Road Not Taken," which argued that trans activism could have and should have pursued the path of advocating for “reasonable accommodations” for people with gender dysphoria, but instead chose to pursue a path of forcing others to accept radical reality-denying ideologies.

Wright is trying to appeal the decision, but if past suspensions of others have taught anything, Wright could lose access to his account with just one more violation. Twitter has been cracking down on gender critical voices due to pressure from activists, who call it "stochastic terrorism."

Dr. James Lindsay, a math PhD known in part for the "Grievance Studies Affair" that exposed frivolous scholarship within university humanities departments, among other, have recently been permanently banned from Twitter for his use of the word "groomer" to describe the tactics used by gender ideologues to lure youths into their cultish belief system.

While this is Wright's first suspension from Twitter, he has recently been permanently banned from Paypal and Etsy for voicing gender critical views.

Wright earned his PhD in evolutionary biology from UC Santa Barbara in 2018, and left in 2020 after being targeted and harassed by Left-wing activists and academics for publicly expressing his mainstream scientific views about biological sex.

Wright maintains that there are only two sexes—male and female—and that sex is not a spectrum or a "social construct." He is also a strong critic of gender ideology because of how it conflicts with women’s sex-based rights and results in harm to children by convincing them that their gender nonconforming behavior suggests they have been "born in the wrong body."

In April, Elon Musk famously shared Wright's first original cartoon depicting his political journey and the left retreating from their liberal values for regressive policies, which sparked a firestorm of discussion across Twitter and various news outlets.

Wright told the Post Millennial, "I’ve been locked out of my Twitter account for posting a political cartoon. The cartoon was not promoting hate or violence to any community, but merely highlighting the harmful excesses of trans activism that denies biological reality and infringes upon the rights and safety of other groups.

"The cartoon utilized a common philosophical moral dilemma known as the Trolley Problem. The Trolley Problem’s original version presented students with a situation where a trolley is speeding down a track that is about to run over and kill five people who are tied to the track.

"However, there is a switch that can be pulled that will divert the trolley down a side-track where there is only one person tied down. The moral dilemma is whether you should simply let the trolley continue down its current path where five people will be killed, or whether you should insert yourself in the situation by pulling the switch, but in doing so you will be actively choosing to kill someone who would have otherwise been safe," Wright continued.

"There are many versions of this classic philosophical dilemma," said Wright. "My version was providing commentary on the excesses of trans activism by depicting the trolley, labeled 'People with gender dysphoria,' speeding down an unimpeded track toward 'reasonable accommodations.'

"However, instead of allowing this ideal situation to simply unfold, a person labeled 'trans activism' chose to pull a switch sending the trolley down a side-track where five people are tied to it, and the people are labeled 'biological reality,' 'women’s rights,' 'child safety,' 'LGB rights,' and 'common sense.'

"The point being made is that trans activism didn’t have to go down this path in order to achieve acceptance, but this is nevertheless the costly path they chose. This cartoon was not targeting anyone or any community, but rather a very specific form of extreme activism rooted in radical political ideologies," he concluded.