BREAKING: Crowd of 4000 gathers in Toronto to protest lockdowns

For the fourth week, the “March for Freedom” took to the streets of downtown Toronto to call for an end to COVID-19 restrictions across the country. 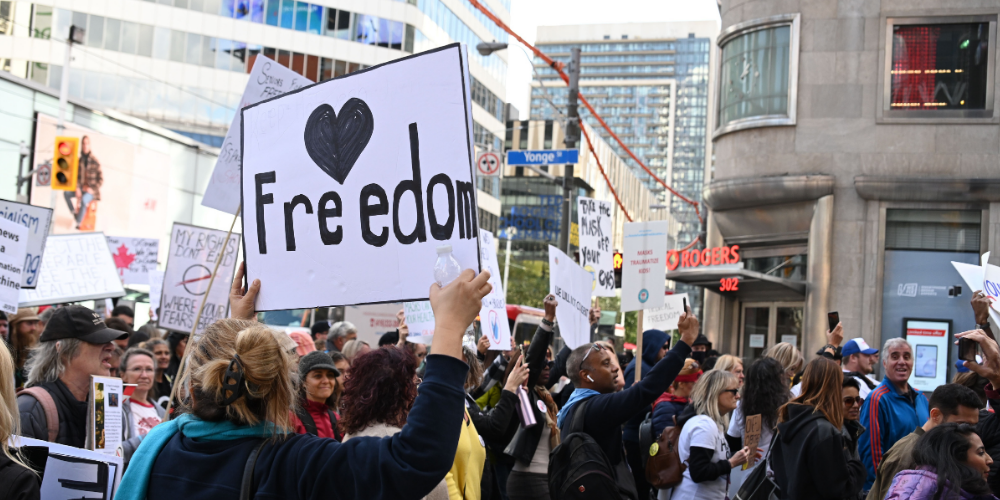 For the fourth week, the “March for Freedom” — an offshoot of earlier “End the Lockdown” protests which took place in Queen’s Park — took to the streets of downtown Toronto to call for an end to COVID-19 restrictions across the country. At least 4000 people participated in what was the largest of these events.

Last week, Premier Doug Ford’s new “revised” Stage 2 rules went into effect for Toronto, Peel and Ottawa, forcing indoor dining at restaurants, gyms, movie theatres, and other businesses which were recently allowed to re-open to close for “at least” 28 more days. Outdoor gatherings have been capped at 25 people. York Region was just sent back to stage 2 as well.

When asked if he feels this affects the protests, organizer Lamont Daigle said “For 27 weeks Ford has said he will be fining us, and we shouldn’t be doing this. This is way more than 25 people. He has never fined us, we’ve never been arrested, and they’re just talking.”

Daigle spoke of the large turnout despite mainstream media consistently downplaying numbers or ignoring the events entirely. “Lots of media agencies have said we’ve had anywhere between 100 to 300 people, but there’s really no denying the fact that we blocked off Yonge Street because we had so many people here.”

During the march protestors often confronted observers who wore masks, shouting “we’re doing this for you!” and urging them to stop being sheep. They told one man to “breathe some air” and “don’t listen to CBC!”

The event ended peacefully with no arrests.