"The minute even a small fraction of what those border towns deal with every day is brought to their front door, they all of a sudden go berserk and they’re so upset this is happening," DeSantis said. 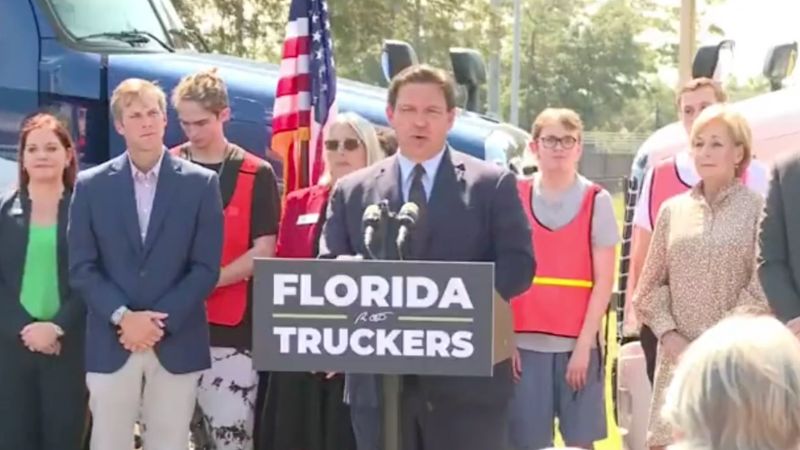 Joshua Young Youngsville North Carolina
Sep 15, 2022 minute read
ADVERTISEMENT
ADVERTISEMENT
On Thursday, Florida Governor Ron DeSantis was speaking at an event for truckers and called out the hypocrisy of Democrat leaders who once supported open borders but have now expressed concern over illegal aliens landing in their cities and towns.

"The minute even a small fraction of what those border towns deal with every day is brought to their front door, they all of a sudden go berserk and they’re so upset this is happening," DeSantis said of leaders such as NYC Mayor Eric Adams and Washington, DC Democrat Mayor Muriel Bowser. "It just shows you, you know, their virtue signaling is a fraud," DeSantis added.

DeSantis joined a growing number of state leaders, such as Texas Governor Greg Abbott, who have been sending illegal immigrants to "sanctuary destinations" across the country. The Florida mayor sent two planes full of illegal aliens to Martha’s Vineyard in Massachusetts, a state that has supported the Biden administration’s open-border policies.

Both DC Mayor Muriel Bowser and NYC Mayor Eric Adams have lamented the modest influx of illegal immigrants as overwhelming. In DC, Bowser declared a public emergency last week to handle an increase of 9400 migrants. In NYC, Eric Adams said the increase is causing him to reconsider the states "right to shelter" laws.

"They are supporting policies that are just frankly indefensible, it is not defensible for a superpower to not have any control over the territory of its country over the borders of its country," DeSantis said.

The Biden administration has seen a record-high number of illegal immigrants pouring into the United States along the country's southern border. When Joe Biden took office in 2021 he dramatically loosened restrictions along the southern border which contributed to a growing humanitarian crisis.

The Biden Administration and HHS Secretary Alejandro Mayorkas repeatedly said that children would be admitted and that those seeking asylum would also be let in in an effort to distinguish themselves from the Trump Administration.

It is a federal misdemeanor to illegally cross into the United States and a felony if it's done twice yet President Biden has remarkably reduced the number of prosecutions for that crime.

"And he inherited a situation where you didn't have this happening. And yes, we needed to build the wall. There was more than we needed to do. He reversed the Trump policies, knowing what would end up happening," DeSantis continued.