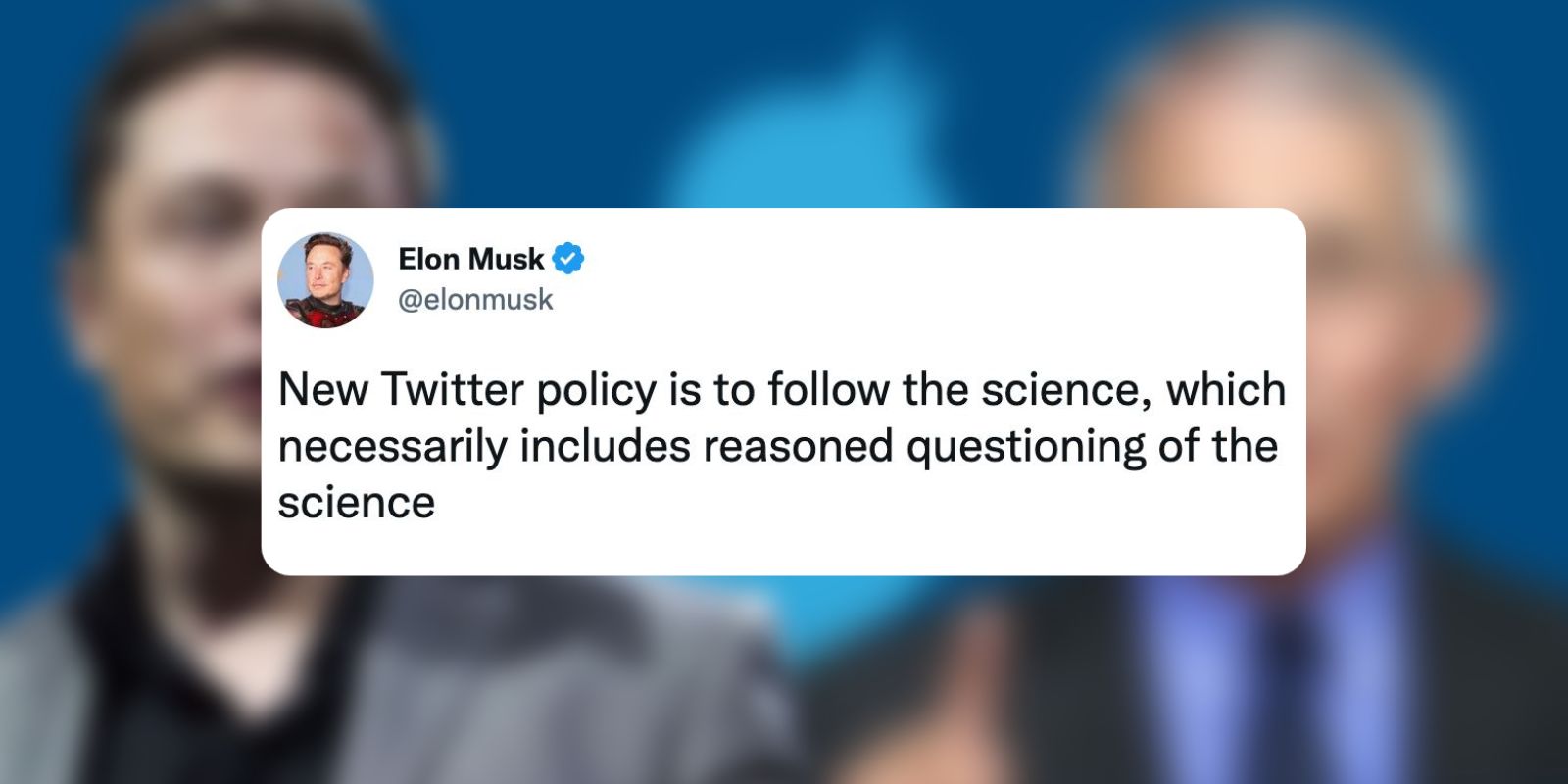 Roberto Wakerell-Cruz Montreal QC
Dec 28, 2022 minute read
ADVERTISEMENT
ADVERTISEMENT
Twitter CEO Elon Musk said on Wednesday that his website's new policy is to "follow the science," though not in the way that corporate media has done over the past two years.

A sarcastic tweet from evolutionary psychologist and author Gad Saad replied, "the science is anything that His Eminence Lord Fauci says it is. His Excellency is science," referring to Dr. Anthony Fauci, to which Musk said, "Anyone who says that questioning them is questioning science itself cannot be regarded as a scientist."

Musk is referring to comments made by Fauci where he claimed to symbolize "truth and integrity" across society, in something he called "the Fauci effect."

"People go to medical school now, people are interested in science, not because of me, because people most people don't know me who I am. My friends know me. My wife knows me. But people don't know me. It's what I symbolize," said Fauci. "And what I symbolize, in an era of the normalization of untruths, and lies, and all the things you're seeing going on in society from January 6 to everything else that goes on, people are craving for consistency for integrity, for truth and for people caring about people," he added.

Fauci also said that attacks on him are "attacks on science" when speaking to MSNBC's Chuck Todd in June 2021. In November 2021 he told Face The Nation's host Margaret Brennan that "if you're attacking me, you're really attacking science."

A recent installment of the Twitter Files revealed that medical experts were censored and deplatformed. That discovery, which was released on Monday morning, showed that the federal government under both President Trump and President Joe Biden pressured Twitter to suppress information regarding Covid and vaccines that did not abide by the narrative.

Free Press's David Zweig revealed in his thread that the US government "pressured Twitter and other social media platforms to elevate certain content and suppress other content about Covid-19."

"Internal files at Twitter that I viewed while on assignment for @thefp showed that both the Trump and Biden administrations directly pressed Twitter executives to moderate the platform’s pandemic content according to their wishes."

"The Trump White House," that document read, "specifically Michael Kratsios, led the Trump Administration's calls for help from the tech companies to combat misinformation. Areas of focus included conspiracies around 5G cell towers, runs of grocery stores, and misinformation that could stoke panic buying and behaviors."

It was "one of the first meeting requests from the Biden White House" that "COVID misinformation" be suppressed.