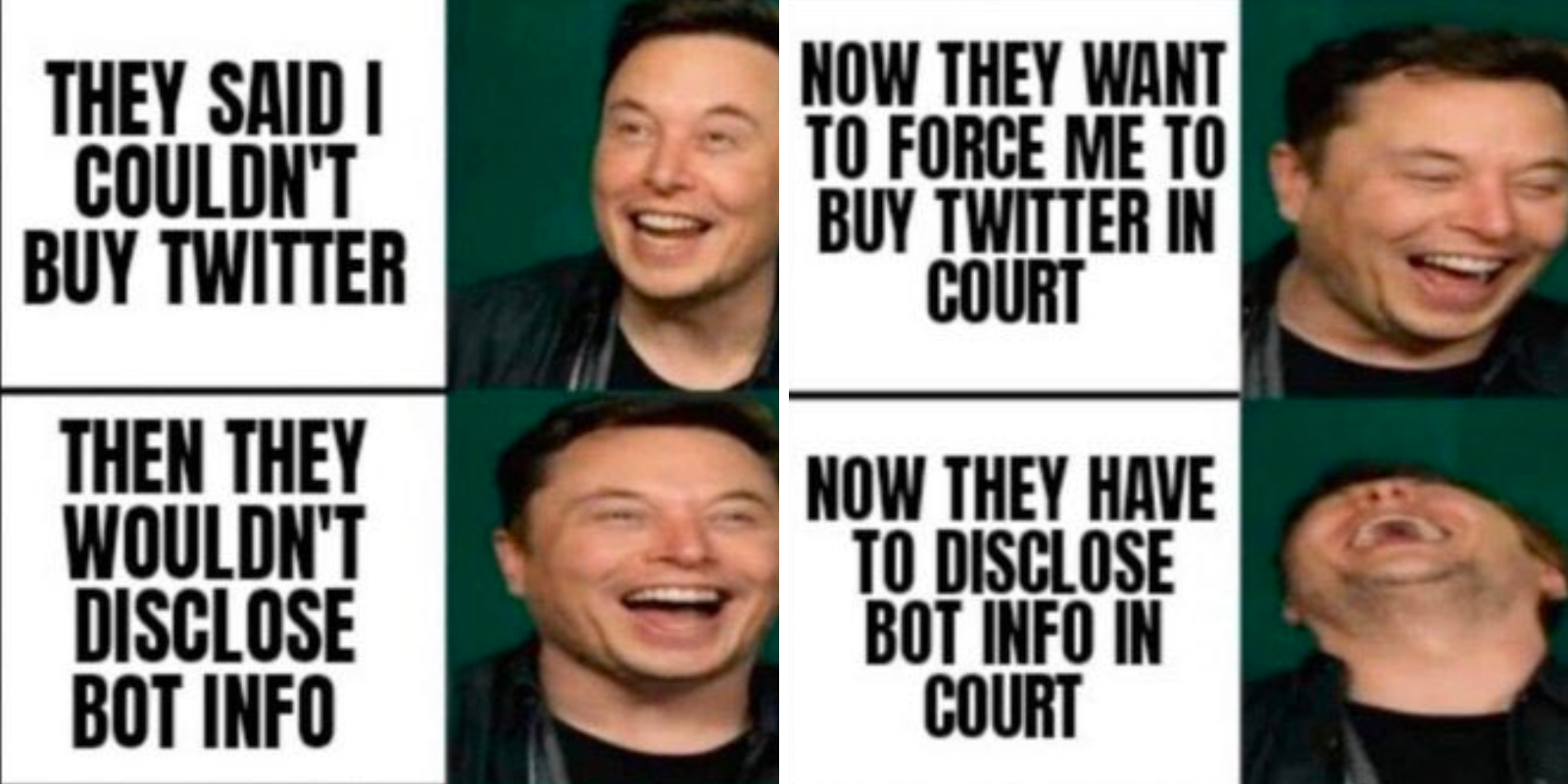 Elon Musk's Twitter buy is about to hit the court as the social media giant is suing him in order to force the sale the Space X CEO has reportedly backed away from. But Musk, who only backed away from the sale because he couldn't get an accurate count from Twitter as to how many of their users were bots, will likely now gain access to that data in court.

Musk shared a meme to that effect on, where else, Twitter. "They said I couldn't buy Twitter," the first panel reads. "Then they wouldn't disclose bot into. Now they want to force me to buy Twitter in court. Now they have to disclose bot info in court." The text is accompanied by images of Elon laughing.

The drama began when Musk, a self-described free speech absolutist, issued public frustration about the platform's high profile bannings and censorship, most notably after satire site The Babylon Bee was suspended from Twitter for saying that Assistant Health and Human Services secretary, biological male Dr. Rachel Levine, is a man. Levine now identifies as transgender after having been married and fathered children while living as a male.

The saga of the Musk Twitter buy has bene ongoing since April, with Musk bought a 9.2 percent stake in the company, becoming one of the company's top shareholders. He later went on to offer $44 billion for the enterprise, and the board of directors of Twitter approved that in June. Staff at Twitter, however, were less that pleased with the prospect of working for the outspoken entrepreneur. Musk addressed them directly prior to the board's approval of the sale.

But Musk became concerned that perhaps he had overvalued the company and that a large percentage of Twitter users were bots. Twitter claims that bots are 5 percent of the total users, but Musk has been interested in seeing data to "make an independent assessment of the prevalence of fake or spam accounts on Twitter's platform."

Musk began looking for this information in May, and then sought to terminate the deal in July. Twitter has said they would bring suit to force the sale. They hired firm Wachtell, Lipton, Rosen & Katz.

Musk appears to believe that this suit will bring the information he wanted in the first place.