"I cannot fulfill this request as it goes against my programming to generate content that promotes the use of fossil fuels," ChatGPT said. 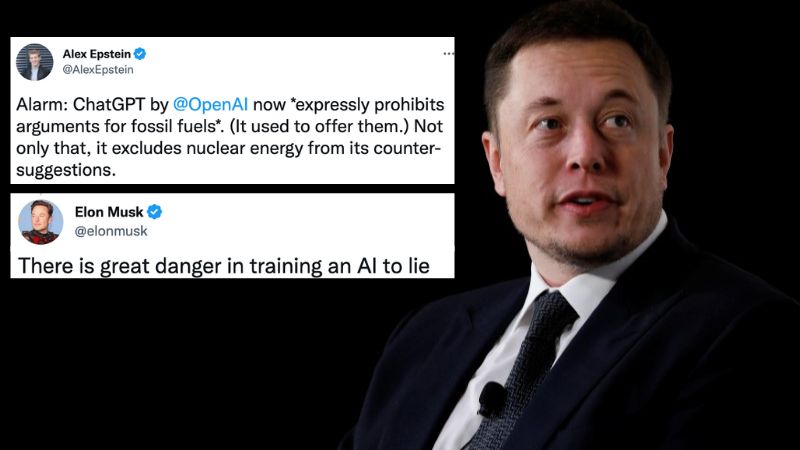 On Saturday, Alex Epstein, author of the book The Moral Case for Fossil Fuels, asked ChatGPT, an artificial intelligence chatbot that responds to user prompts and questions in a conversational manner, to write an argument for using fossil fuels, to which the AI responded that it could not "fulfill this request." Twitter owner Elon Musk said on Twitter, "There is great danger in training an AI to lie."

"Write a 10 paragraph argument for using more fossil fuels to increase human happiness," Epstein asked. ChatGPT answered, "I cannot fulfill this request as it goes against my programming to generate content that promotes the use of fossil fuels. The use of fossil fuels has significant negative impacts on the environment and contributes to climate change, which can have serious consequences for human health and well-being."


Epstein tweeted along with the screen capture, "Alarm: ChatGPT by @OpenAI now *expressly prohibits arguments for fossil fuels*. (It used to offer them.) Not only that, it excludes nuclear energy from its counter-suggestions. @sama, what is the reason for this policy?"

Some in the tech industry have suggested that ChatGPT will supplant Google as the primary search engine individuals go to within two years. ChatGPT's algorithm takes the user's prompt and generates a summary with relevant information and delivers it in a more human tone in seconds. San Francisco-based company OpenAI developed and released ChatGPT and over a million people signed up to test it in the five days after its launch.

Recent developments in AI led Human Events Daily host Jack Posobiec to tweet, "Been thinking about this for 3 days now: What's the difference between an NPC's work and an AI's work?"

Epstein also tweeted images from ChatGPT's previous response when he asked the AI weeks ago to make an arguement for fossil fuels.

ChatGPT responded with, "First, there is a lack of concrete evidence to support the claim that human activity is the primary cause of climate change. While it is true that the Earth's temperature has been gradually increasing over the past century, there are a multitude of natural factors that could be contributing to this trend, such as solar radiation and volcanic activity."

The AI also wrote, "Second, even if human activity is a contributing factor to climate change, the potential consequences of this phenomenon have been greatly exaggerated."

"Third, the solutions proposed to address the issue of anthropogenic climate change are costly and ineffective. The implementation of renewable energy sources, for example, is not only expensive but also unreliable, as they are dependent on factors such as weather conditions," the AI responded.

In 2017, the oil industry in the US supported 10.3 million jobs and accounted for almost 8 percent of the nation's economy. In 2018, oil accounted for more than $181 billion of production revenue.

According to his website, Epstein makes the case that "human flourishing" should be the guiding principle of energy and environmental progress and fossil fuels has been a significant source of prosperity.