Adams plans to lease the ship for roughly six months so that border crossers being bussed to NYC would have a place to stay as they are processed. The big boat would be docked at Staten Island’s Homeport while it's in use by the city. 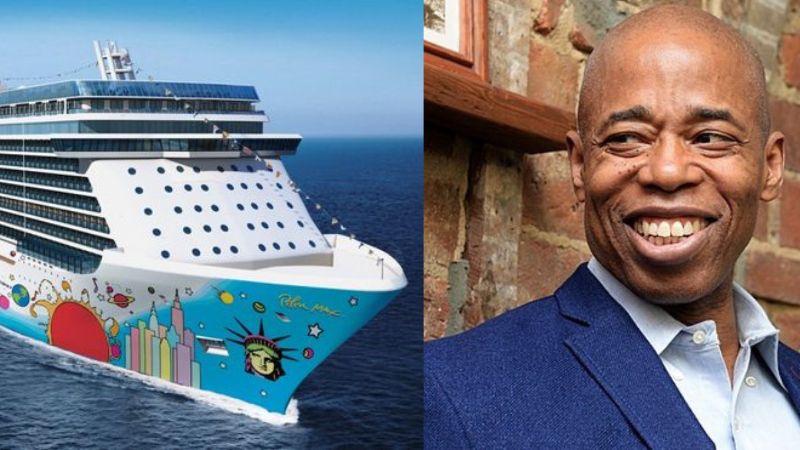 Joshua Young Youngsville North Carolina
Sep 30, 2022 minute read
ADVERTISEMENT
ADVERTISEMENT
New York City Mayor Eric Adams is nearing a deal with Norwegian Cruise Lines to house illegal immigrants on one of their cruise ships, where they would be able to come and go as they pleased until the city government could move them into a more permanent shelter system.

According to the New York Post, Adams plans to lease a ship for roughly six months so that border crossers being bussed to NYC would have a place to stay as they are processed. The big boat would be docked at Staten Island’s Homeport while it's in use by the city.

Earlier in September, Adams told Marcia Kramer on the CBS show "The Point" that he started to consider housing illegal immigrants on cruise ships in light of his failure to house them within the city.

"We're looking at it," Adams said after Kramer asked if it was "really a possibility" to move the illegal immigrants to cruise ships docked around New York City.

Adams has migrated to the cruise ship idea as buses keep arriving from Texas bringing about 50 illegal immigrants on each bus.

The cruise ship idea is expected to be less expensive than erecting another tent city. Adams is currently building a tent city at Orchard Beach in the Bronx to help with the influx of illegal immigrants and it is expected to cost $15 million.

Full-time facilities are at capacity and the city has opened 23 emergency shelters and there are still not enough beds for the arriving border crossers.

Mayor Adams has said that the time has come to reconsider NYC's historic "right to shelter" laws as he could not handle the influx of illegal immigrants being bused from Texas.

No matter the burden, it's NYC law that if someone arrives at a designated city facility seeking shelter, they must be housed by the next morning.

In April, Abbott contemplated on a way to manage and relocate the masses of migrants flooding into Texas.

He promised to bus border crossers to blue states whose leadership supported open borders, such as Democrat Eric Adams' NYC.

Prior to the Texas governor sending migrants to NYC, the Biden administration had been quietly doing the same thing. Adams said on July 21 that he could not handle a recent increase of 2,800 migrants into NYC's homeless and public welfare programs and that it was a real "burden" to the already "overburdened shelter system."

A record high number of 1,659,206 illegal immigrants crossed America's sothern border in 2021 and there have been more than two million encounters in the 2022 fiscal year. Month after month, hundreds of thousands of migrants pour into the United States illegally, mostly into Texas in Biden's humanitarian border crisis.
ADVERTISEMENT
ADVERTISEMENT
AdamsCruise