After four hate-filled years attacking the Trump administration for even the most minute misgivings, establishment media has transformed into President Joe Biden's public relations team. 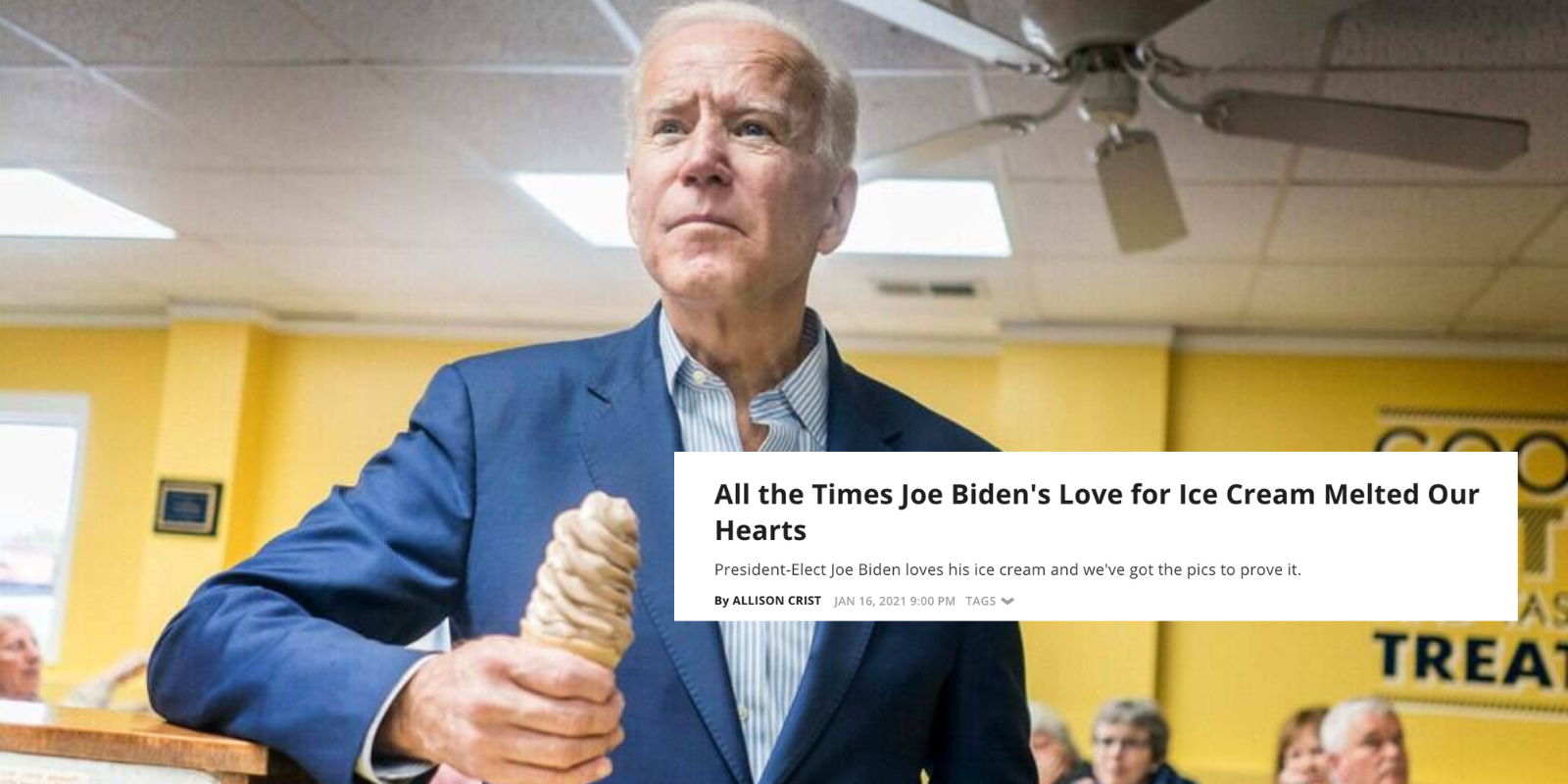 After four hate-filled years attacking the Trump administration for even the most minute misgivings, establishment media has transformed into President Joe Biden's public relations team.

The purported hard-hitting journalists are now lobbing softballs. The ever-critical CNN exposed the Biden-Harris playlist dropped for Americans to play during their at-home inauguration watch parties.

After the political left celebrated the second impeachment of Biden's predecessor, left-wingers are encouraged to kick off the career Democrat's presidency with the "perfect playlist" and "dance the night away as we ring in our new leaders."

The eclectic mix of nearly 50 songs hand-picked with love across the music spectrum is yet to be an impeachable offense.

Vogue is set to publish an updated version of its February "special inaugural issue" spotlighting Vice President Kamala Harris after the original cover photo of her in in Converse sneakers was criticized for appearing too casual and "washed out."

"In recognition of the enormous interest in the digital cover, and in celebration of this historic moment, we will be publishing a limited number of special edition inaugural issues," Vogue wrote on its website with similar messages posted to social media.

The backlash was sparked after the initial feature page was leaked last week. Social justice crusaders suggested online that the photograph was "disrespectful," thoughtless, and "far below the standards of Vogue."

Others felt that the underlit image made the woman of color's skin look "washed out" and veered from Vogue's glamorous aesthetic.

The Washington Post's senior critic-at-large Robin Givhan wrote that while "there's nothing inherently wrong" with the picture, the informal concept "robbed Harris of her roses."

Playwright and lawyer Wajahat Ali claimed that Vogue's editor-in-chief Anna Wintour "must really not have Black friends and colleagues."

Harris and the "first Second Gentleman" made their television rounds this weekend, appearing on "CBS Sunday Morning" to discuss with veteran television host Jane Pauley the true story behind the vice president's favorite sneakers.

"I've always worn Chucks. It's my casual go-to. I grew up with Chucks. I just love them. They're comfortable," Harris confessed to her obsession in one clip uploaded by the Emmy Award-winning morning news program.

Her husband attested in the episode's preview that this shoe brand was not "just something she started doing on the campaign."

Harris is not so robotic and polished as her on-screen persona portrays. The mainstream media's narrative paints her as this down-to-earth gal who rocks Converse all day long. She's not like other girls. She's different.

The Washington Post argued that Biden and Harris find "common ground" through fashion. Pocket squares and pearls convey the "stylish team's message," the newspaper trumpeted whose official slogan is "Democracy Dies in Darkness."

The article went on to glow about how the "future leader of the free world" adores the sweet treat, displaying well-documented instances of his affection for the frozen snack. In his own words spoken at the Columbus headquarters of Jeni's Splendid Ice Cream in May 2016, the 46th president proclaimed before his constituents: "My name is Joe Biden, and I love ice cream."

"You all think I'm kidding—I'm not," the then-vice president added. "I eat more ice cream than three other people you'd like to be with, all at once."

If that's not enough to convince the public of Biden's brave and stunning enthusiasm for ice cream, E!'s online arm asked readers to "consider the iconic declaration" he uttered in 2010: "I am a genuine lover of ice cream. I don't drink. I don't smoke. But I eat a lot of ice cream."

It appears mainstream media is cherry picking Biden quotes from the flashback barrell, neglecting to even resurface recent blunders.

The New York Times associate managing editor and metro editor Cliff Levy insisted late November that non-partisan investigation of government is "core to the @nytimes mission." He vowed that his newsroom will "scrutinize the incoming administration just as thoroughly as we did the outgoing one."

Then on Tuesday, Lauren Wolfe, who edits for The New York Times, experienced "chills" when Biden landed at Joint Base Andrews on the eve of his inauguration.

The eager grovelling is reminiscent of the good ol' Obama days. Since the presidential campaign trail, the star-struck Biden-Harris fanbase romanticized the Democratic ticket and their spouses into Hollywood heartthrobs.

"Most people know her as Jill Biden. But to some she is Dr. B, the compassionate and challenging educator who went the extra mile," the Washington Post's lengthy headline reads, one month after the Wall Street Journal's controversial op-ed, which asked Biden's wife to "think about dropping the honorific" that "feels fraudulent, even comic."

"Let the healing begin. We have needed this," tweeted CNN correspondent Shimon Prokupecz on Tuesday evening.

An emotional MSNBC panel on Tuesday showered Biden with praise during its coverage of the coronavirus memorial event on the National Mall that honored the 400,000 American lives lost so far to the COVID-19 pandemic.

MSNBC contributor Eddie Glaude compared Biden to God as described by the Bible in Psalm 147:3. "He heals the brokenhearted and binds up their wounds," the teary-eyed Glaude recited. "Maybe the death will speak to us now."

The Washington Post's national political correspondent James Hohmann bestowed the "HEALER IN CHIEF" moniker, maintaining at the time that Biden sounds "much more presidential than the current president."

Then he excused Biden's senior moments, asserting that Biden is "at his best" speaking when he utilizes short, punchy, and declarative sentences. Hohmann then spun Biden's gaffes as "flowery rhetorical flourishes" like the 78-year-old orates paragraphs instead of bumbles incomplete clauses.

Trump is to Biden as "lies" is to "truth," "ignorance" is to "knowledge," "amorality" is to "decency," "cruelty" is to "empathy," and "corruption" is to "public service," Harwood delineated.

FOX 11 News co-anchor Elex Michaelson's since-deleted tweet contrasted how the sky rained in 2017 when Trump was sworn in, but just after Biden took the oath of office Wednesday, "the clouds cleared & the sun came out."