EXCLUSIVE: Friend of Jake Gardner reveals his last messages before his suicide, calls out left-wing mob who doxxed and defamed him

In the wake of Jake Gardner's tragic death, his close friend—who organized two since-deleted GoFundMe pages for his legal defense—speaks out on the relentless doxxing by the leftist mob that led to the Trump supporter's suicide. 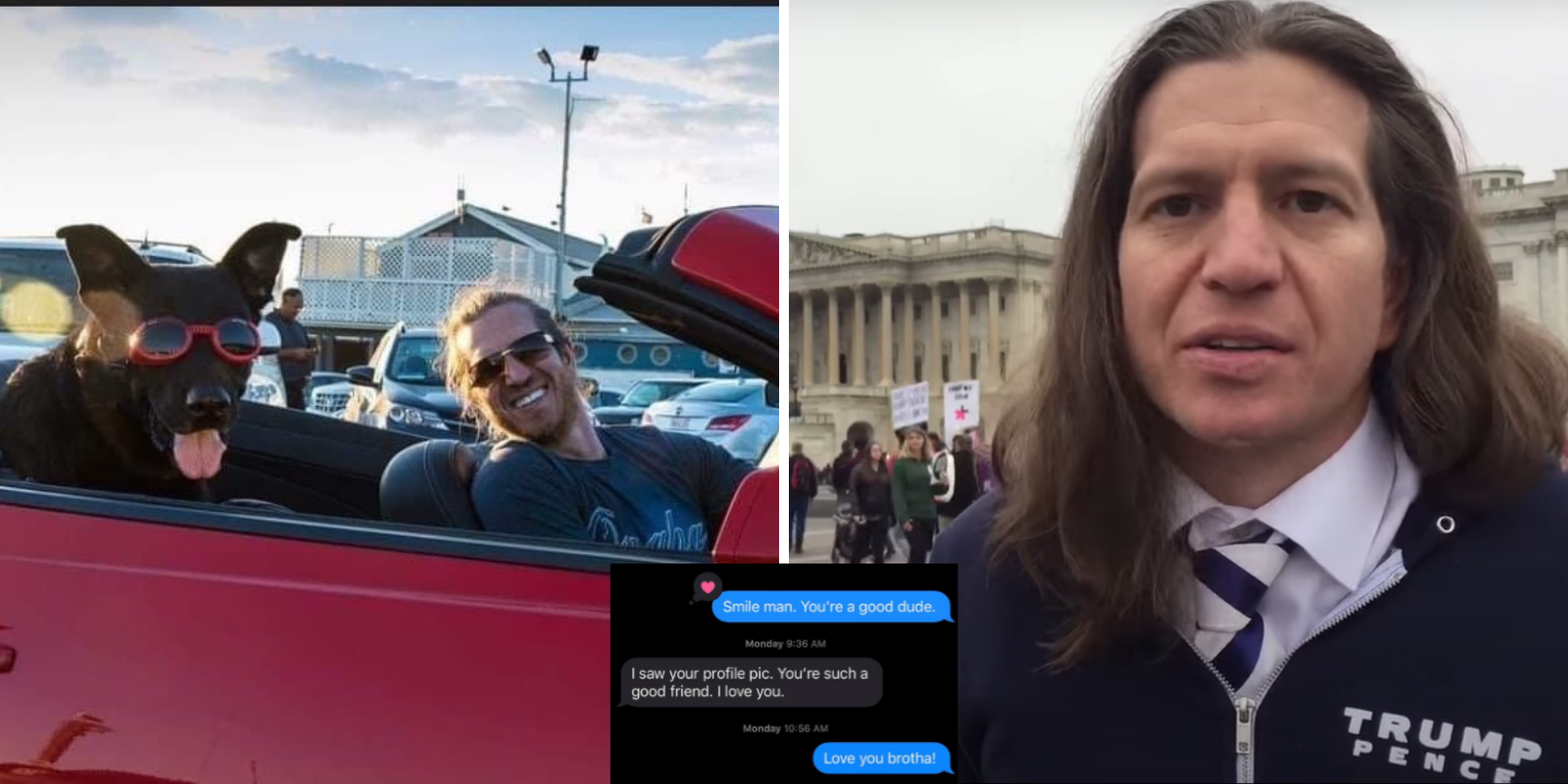 In the wake of Jake Gardner's tragic death, his close friend—who organized two since-deleted GoFundMe pages for his legal defense—spoke to The Post Millennial about the relentless doxxing and defamation by the leftist mob prior to the Trump supporter's suicide.

The conservative 38-year-old bar owner from Omaha, Nebraska, took his own life after a grand jury indicted him for the fatal shooting of a black man who assaulted his family and vandalized his storefront among other neighboring businesses amid George Floyd protests in May.

"All the news headlines were racially motivated when I don’t believe this shooting had anything to do with race and in fact about a man trying to protect his livelihood as well as his elderly father," Justin—who declined to use his full name for fear of retribution—said in an exclusive interview.

Justin reached out to his beloved friend the night before he was found dead Sunday from a self-inflicted gunshot wound outside a medical clinic in suburban Portland, Oregon.

"Hey man thinking about you!" Justin messaged Gardner on Facebook, the last text he sent to him early Saturday night.

Gardner had asked Justin to pray the day before the grand jury indictment hearing. "Say a prayer for justice please," Gardner wrote.

Justin watched the Facebook live feed for the announcement, reassuring Gardner: "I know this looks bad but do not lose heart."

Gardner was then indicted by the grand jury on counts of manslaughter, use of a firearm in the commission of a felony, attempted first-degree assault, and terrorist threats. If convicted, Gardner would have faced up to 95 years in prison.

"To my shock they indicted Jake on four charges. I sent him a couple text messages after I heard the hearing and his phone was already turned off about 4:35 [p.m.] in the afternoon," Justin recounted, calling the grand jury's decision "a disservice to the justice system."

On Tuesday, Justin informed Gardner of the GoFundMe account he had launched to aid his legal defense.

"It was just a drop in the bucket to what he was going to have to pay but any little amount helps and I felt obligated to help my friend," Justin explained.

Then Justin received backlash on social media and the page was taken down due to a flood of email complaints, raising just $100.

When Justin created a second page, that's when he was personally attacked. A Black Lives Matter activist group contacted his place of employment with a scripted demand, claiming to black ball him and any of the companies he works for. Justin changed his screen name on Facebook after his LinkedIn profile was posted to several websites, including pictures of his son.

"Never have I been targeted so viciously," Justin stated as he was forced to deactivate the second GoFundMe fundraiser, only raising $45.

A swarm of social media jockeys reported both campaigns to "Customer Happiness Agents," alleging a "violation of Terms of Service" to the site's administrators.

After two censored attempts on the mainstream crowdfunding platform, Justin decided to create an alternative Spotfund page that sadly turned into a memorial fund.

"I am sorry to announce he is no longer with us," Justin wrote under Gardner's alias. "This tragic loss of life never had to happen! Please help the family on the funeral expenses. God bless Jake and his sweet soul!"

Almost $4,000 donations have been raised to date out of the $15,000 goal. Justin is continuing to pursue the Spotfund account to call attention to Gardner's cause. He is arranging plans with friends and family to celebrate his life.

"Jake was one of the nicest people I’ve ever met. He had a polarizing personality and an infectious smile. You couldn’t help but to be happy when you were around him. He cared so much about Omaha and was proud to be a native," Justin described Gardner's character. "We are all very saddened by this senseless loss of life."

On May 30, Gardner was confronted and attacked by BLM activists outside Gardner's Hive bar in the Old Market, a neighbourhood in downtown Omaha. While backing up, Gardner reportedly lifted his shirt to show a handgun, cautioning instigators that he was armed. Then when knocked to a puddle on the ground, Gardner fired two warning shots in the air, attempting to rise to his feet. An 18-second scuffle broke out with 22-year-old James Scurlock before Gardner shot Scurlock, Norfolk Daily News reported.

Video evidence also depicted Scurlock inside the building next door, destroying computer monitors, a desk phone, and drywall at RDG Planning and Design, an architecture firm. The rioters escaped through an already shattered window.

Douglas County District Attorney Don Kleine originally ruled Gardner's case an act of self-defense, deciding not to pursue charges after reviewing corroborating evidence. Kleine had determined that Scurlock dived on Gardner’s back and choked him, the New York Post reported. Gardner could be heard in another bystander’s video shouting, “Get off me, get off me.” With his right arm pinned, Kleine noted, Gardner switched the gun to his left hand and fired over his shoulder. The bullet hit Scurlock in the shoulder-neck area, killing him. But Kleine buckled after BLM activists took to the district attorney's house in July, demanding justice for Scurlock.

"You can’t tell me a person found completely innocent on the grounds of self-defense was later found indicted because of pressure and numerous anonymous witnesses that came forth against Jake later on," Justin declared. "I don’t believe them to be even credible in Jake’s death I believe is personally at the feet of weak city officials and the mob rule."

Justin criticized the mainstream media for vilifying Gardner and glorifying the deceased black rioter who assaulted Garner. Meanwhile, a GoFundMe established for Scurlock's family has raised more than a quarter of a million dollars.

According to the coroner's toxicology report, methamphetamine and cocaine was found in Scurlock’s urine, Omaha World-Herald reported. Scurlock was also stained by a significant criminal history at just 22-years-old. An affidavit obtained by Nebraska News Channels revealed that Scurlock was arrested in 2014 for robbery and use of a firearm to commit a felony. Law enforcement officers implicated Scurlock's involvement in a home invasion robbery as part of a group of black males who entered the residence and threatened four civilians at gunpoint for drugs and money. He was sentenced to three to five years in prison but served less than a year, released the following August. Scurlock was also found guilty of assault and battery charges last year, serving one day in jail. The suspect additionally plead guilty to third-degree domestic assault this past February, completing a 90-day jail sentence.

"A significant misconception that was being passed around the media was that [Gardner] was a white supremacist which is furthest thing from the truth," Justin continued, pointing out that a majority of Gardner's patrons were African American.

Radical activist Shaun King hurled the racism accusation in a tweet late Sunday night, outraged that Gardner was not arrested upon learning of his death. "Not justice," King fired to his massive Twitter following.

"Blown-up and side-by-side, the similarities between The Gatsby’s black cross (left) and variations of the Nazi swastika (middle) and the German Iron Cross (right), another symbol sometimes associated with white-supremacy, are striking," Wilkins raved.

"I never once heard Jake even say a negative term or a mean thing to anyone much less any racial slur," Justin urged. "I believe the media and people in Omaha tried to label him as a racist in an effort to excite a racial situation."

Gardner was a former U.S. Marine who served two tours in Iraq, suffering two traumatic brain injuries from combat that placed the veteran on disability.

Justin recalled Gardner not sleeping, plagued by the unbearable stress. All Gardner wanted for the future was to move past this traumatic event and travel the United States with his service dog Bron, Justin stated.

"Jake loved life and he was a very charismatic and made an effort to always put a smile on your face. The guy was so full of life and truly feel like he had one of the best souls!" Justin went on.

In a 2017 video at President Donald Trump's inauguration, Gardner was revealed to be a soft-spoken volunteer for Trump's campaign as he sported a Trump-Pence sweater and donned a "Make America Great Again" vest on his loyal canine.

"Everyone just wants to be heard," Gardner commented on the Women's March occurring the following day. The newly-deceased supported his political opponents' constitutional rights to free speech without violence.

"I think the grand jury is not only at fault for pinning Jake into a corner. What the city of Omaha did was a travesty to a decorated soldier!" Justin concluded. "I believe officials caved under pressure of potentially having another riot in Omaha. I believe they indicted an innocent man in an attempt to try to kick the can down the road."