Far-left group that calls for arson raises $50,000 on GoFundMe after fire destroys its office

CrimethInc has raised over $50,000 on GoFundMe, a crowdfunding site notorious for deplatforming campaigns that support right-wing causes. 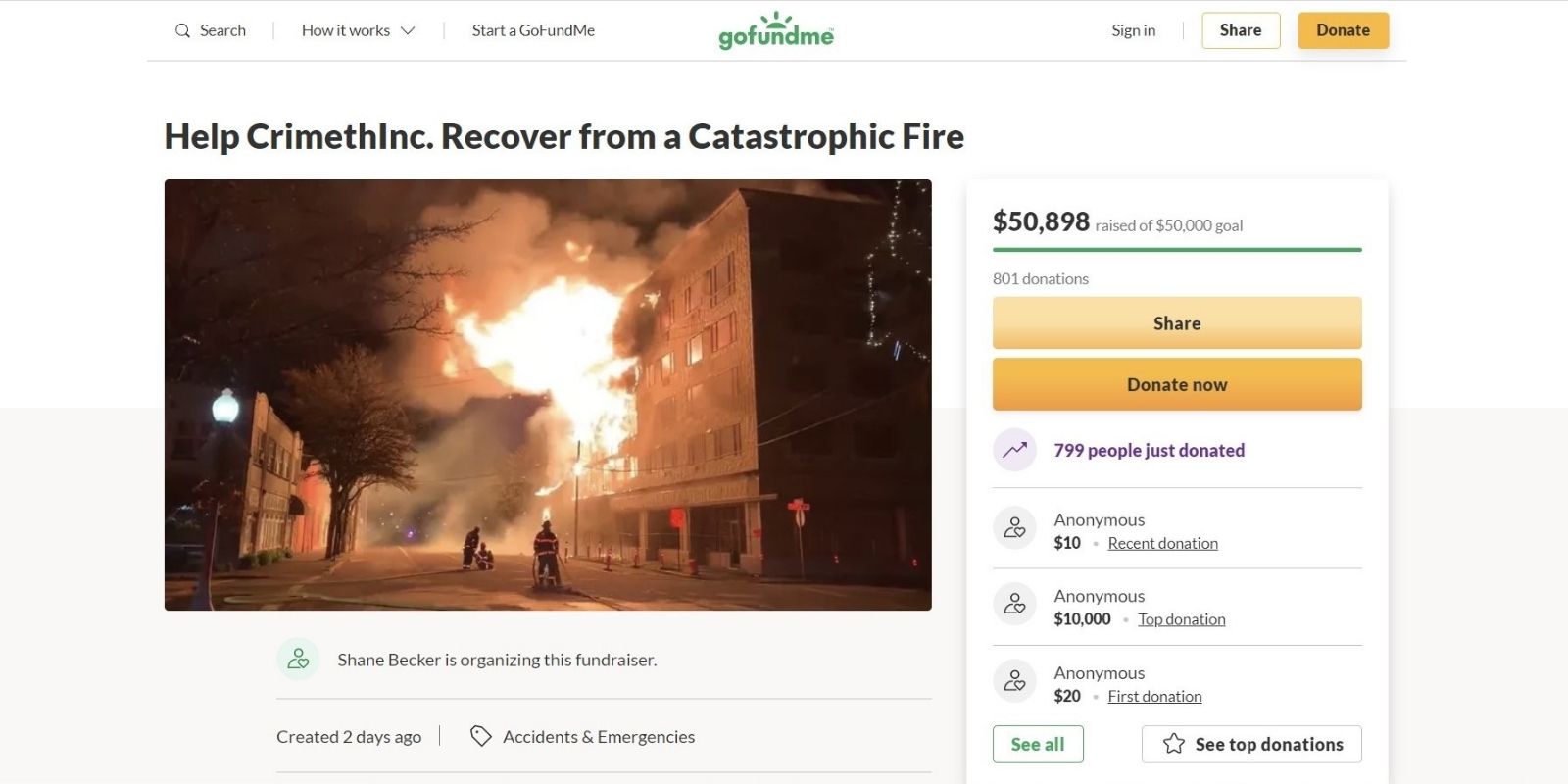 Violent far-left group CrimethInc, which incites its members to commit crimes, is running a GoFundMe campaign that amassed thousands of dollars after its mail-order space where extremist texts are printed was destroyed in a fire.

According to the GoFundMe fundraiser tagged under the "Accidents & Emergencies" category, the mail-order space of the organization's "Ex-Workers Collective" was torched Wednesday in "a catastrophic fire" that reduced three large buildings to "burned-out shells" in downtown Olympia, Washington.

Thousands of CrimethInc's books, posters, and stickers promoting far-left propaganda were consumed, in addition to equipment and supplies. "We lost everything that was in the space," CrimethInc stated in the campaign's description.

A poster titled, "A New World from the Ashes of the Old," is among the propagandist print materials that CrimethInc lists on its website. "Solidarity with the Minneapolis rebellion. Rest in power, George Floyd," the page reads.

The item's listing states that a high-quality printed edition can be ordered from Black Mosquito where all proceeds will "go to legal support funds for arrestees in the US" and earnings will be "donated to anti-repression structures" in America.

Why Break Windows: The Effectiveness of Political Vandalism, which argues that vandalizing businesses and property destruction are legitimate acts of resistance to fight against capitalism, is also available agitprop CrimethInc promotes.

To recover from the large-scale property destruction, "a tremendous setback" to CrimethInc, the group stated it needs to secure a new space and replace the products lost including computers, printers, packing materials, and furniture to resume the "all-volunteer operation" that is "run on a shoestring budget."

The fire came at a time when CrimethInc was "on the cusp of completing a Kickstarter campaign" to reprint two of its books that were still in the printing queue at the factory and not demolished by the flames.

CrimethInc's crowdfunding page has reached its $50,000 goal with over 800 donations on GoFundMe, which is notorious for deplatforming campaigns that support right-wing causes. Its top donor Saturday remains anonymous, giving an eye-popping $10,000 to the online fundraiser launched two days ago.

"ACAB [All Cops Are Bastards]," one of the GoFundMe donors wrote on the campaign's page. "Sometimes fires are fun, most times fires are just destructive. Take this solidarity money so we can get back to talking around fun fires."

Another donor, a self-identified "young anarchist," thanked CrimethInc for its resources. "Solidarity!" the GoFundMe contributor declared.

The campaign is run by violent radical Shane Becker, who fantasizes about killing police officers, distributed riot gear during the height of the civil unrest last year, and instructed Antifa rioters to use human body shields at direct action events.

"A speculative fiction: Cops kill people. So, what if people killed back?" Becker began the murderous fantasy. "Cops might be the ones looking over their shoulders instead," Becker tweeted in December 2014.

In an instructive Twitter thread, Becker urged Antifa comrades to add themselves to the "sea of bodies," tweeting: "Hell, just showing up and adding your body to the sea of bodies, the numbers opposed to the fascists, helps scare them away."

"A sea of bodies opposed to the fascists also provides cover for those that are there to do physical battle," Becker advised in August 2017. "That's important too."

Becker reminisced about a speech he delivered several years prior at the Ruby On Ales conference. "Just some good old fashion arson," he tweeted in February 2016.

The government page for the city of Olympia promoted the GoFundMe campaign.

"Many people from the Olympia community have asked us how they can help the individuals and businesses impacted by Wednesday's fire," Oympia's official Twitter account tweeted Friday, alerting its over 8,000 followers how to access the donation sites for local businesses affected. CrimethInc, described as a "publisher/binder," was listed before its removal from the government page.

"The city is sharing the crimethinc fundraiser i cant get over how funny this is," an "anarchist" Twitter account wrote, garnering over 300 likes. Another account identifying with "anti-fascism" mocked CrimethInc's "business type" category, "[T]hanks for the laugh, unironically hope more ppl donate because of this."

CrimethInc, which calls for arson attacks and political violence, was deemed so extreme that Facebook banned the organization from its platform last year.

Facebook shut down multiple Facebook pages last August believed to be connected with CrimethInc.com, among other anarchist and Antifa publishing projects.

Amid the social media purge, Facebook took action during the summer 2020 Black Lives Matter riots against Antifa and other "offline anarchist groups that support violent acts amidst protests," updating the site's Dangerous Individuals and Organizations policy towards violent networks in the United States.