While the agent attempted to handcuff them, he/she was "pushed, dragged, and punched by the individuals," according to the FBI's statement. 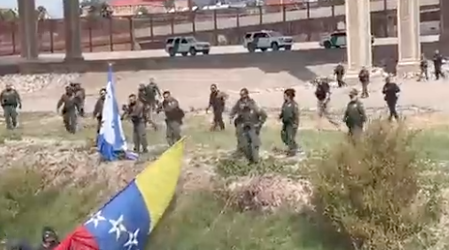 Kevin Escalona Gonzalez, 35, and Yuleixy Mata Fuentes, 27, were arrested for the assault of the unnamed federal officer on Oct. 31, according to a press release from FBI El Paso Special Agent Jeanette Harper.

On that morning, the agent was notified of a group of illegal border crossers that made their way into a residential area in El Paso, TX.

When confronted, the group of migrants, the size of which was not mentioned, dispersed, but the agent caught up to Gonzales and Fuentes, who aggressively resisted arrest.

While the agent attempted to handcuff them, the agent was "pushed, dragged, and punched by the individuals," according to Harper's statement.

The officer was eventually able to regain control of the situation and arrest them without further incident, the FBI said.

The two alien migrants made their first appearance in court before a US Magistrate Judge on Nov. 1, and are now being held at El Paso County Correctional Facility, reported Fox News.

"Assaults on Border Patrol agents or any other federal agents/officers or task force officers will not be tolerated and will be addressed swiftly by our office so they can continue to carry out their sworn duty to protect our communities," he said.
ADVERTISEMENT
ADVERTISEMENT
Venezuelans at the U.S. border