Five injured, one in critical condition after shooting at North York nightclub 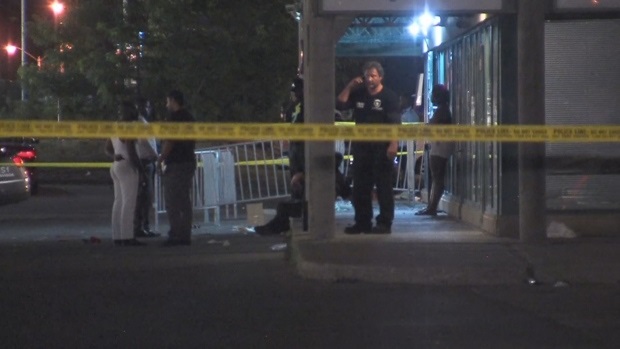 Five people are reportedly wounded after gunfire broke out inside of a North York night club.

Officer Stacey Davis said multiple people started to call police after shots rang out at the back of the North York club, District 45.

“The club was completely full,” said Davis, adding later that it was “fortunate there’s five victims only.”

Two of those injured in the gunfire escorted themselves to the hospital before police arrived. Three others, including the victim found in life-threatening condition, were located at the scene.

Of the five people shot, three were men and two were women, according to CBC.

Officer Davis went on to say that suspects are believed to have fled before police arrive, and that they are asking any eyewitnesses to come forward.

“It’s very concerning,” she said of the shooting. “The club was packed with patrons.”

Toronto police also confirmed another shooting at Church and Adelaide streets in the downtown core.

One man was found on the sidewalk near a vehicle which was reportedly full of bullet holes.

According to CBC, the man remains in hospital in critical condition

Police were called to the crime scene at around 4 am on the morning of August 5, after gunshots were reportedly heard in the area. A second man also made his way to the hospital shortly thereafter, but police have yet to confirm if the man was injured at the same incident.

Police say that there is no suspect information available at this time.