"It is bullying, and I do not trust that a newspaper that elevates this sociopathic behavior will cover me fairly," Pushaw told the Washington Post. 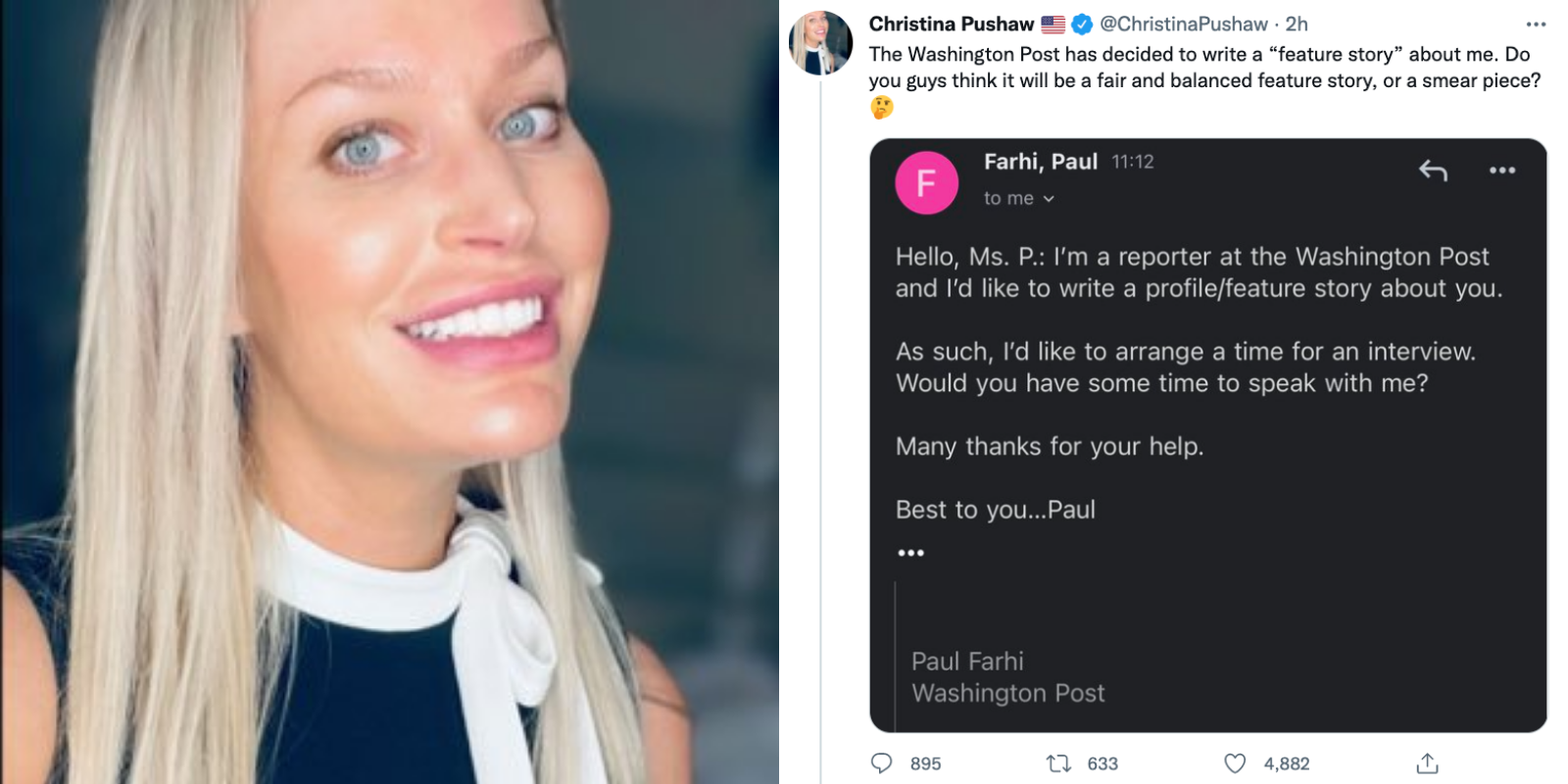 After Libs of Tik Tok was doxxed, and her family harassed, by the Washington Post's crybully tech reporter Taylor Lorenz, who performatively cried on TV over mean tweets, the paper is coming for Florida Press Secretary Christina Pushaw.

Pushaw shared an email she received from the WaPo's Paul Farhi, asking to interview Pushaw for a "profile/feature story" about the press secretary. In response, Pushaw, in short, said no.

"Earlier this week," she said, "a columnist who works for your paper reached out to me claiming to be a 'reporter,' gave me a one-hour deadline to respond to her assertions about me – for a piece she had already been writing for days, and tweeted the falsehood that press secretaries craft legislation. And tehse are the least of my complaints about the Washington Post's hit piece on Chaya Raichik."

"Most troubling," she went on, "was the paper's statement yesterday afternoon, defending the smear and telling an easily refuted lie." Pushaw linked the statement, which read:

"Taylor Lorenz is an accomplished and diligent journalist whose reporting methods comport entirely with The Washington Post's professional standards. Chaya Raichik, in her management of the Libs of Tik Tok account and in media interviews, has had significant impact on public discourse and her identity has become public knowledge on social media. We did not public or link to any details about her personal life."

Pushaw told Farhi that the Washington Post lied in that statement, because the article penned by Lorenz "did provide a link to Raichik's real estate license, which included her address."

"Your paper later removed the link," she wrote, "but did not issue any apology or correction. This put Raichik in danger, and it is appalling that a columnist who has been so outspoken about the harms of online harassment and doxing would do the same thing to a woman she disagrees with on politics. It is unconscionable that the Washington Post condones this.

"The purpose of journalism," Pushaw continued, " is to hold the powerful accountable. Wielding the power of a national newspaper to intimidate a private citizen for the thoughtcrime of reposting TikTok videos, that liberal creators posted publicly, is not journalism. It is bullying, and I do not trust that a newspaper that elevates this sociopathic behavior will cover me fairly.

"This is not personal – I do not know you and have only heard positive things about your," Pushaw said of Farhi. "But I do know the Washington Post. Thanks for your understanding."

In closing, Pushaw warned the journalist, and the paper, away from visiting either Pushaw or her family at their homes, saying "By the way, I want to be very clear: Neither you not your colleagues are welcome to visit my home or the homes of my relatives. Harassment is harassment, even if it's ostensibly done in the name of 'reporting.'"

Lorenz exposed Libs of Tik Tok, an anonymous account that simply reposts videos from Tik Tok and other social media sites of liberals, leftist and progressives publicly sharing their views. These views are often very bizarre to mainstream and conservative Americans, as they show teachers "coming out" to their students or discussing how they intend to encourage their students to come out to them and to keep the information from parents.

The account has also exposed professors who claim that there's no issue in adults have sexual "relationships" with children and teens, which most people, and the law, would classify as rape.

Lorenz claimed that the account targeted LGBTQ+ persons, though instead of targeting those accounts, it boosted them to a broader public audience.