"Everybody kind of slid up against me," Sargeant said. "I couldn't move one way or the other. And when I did try to move, somebody would yell, 'you're hurting me!' as though an elderly man with a cane is somehow capable of hurting a young person." 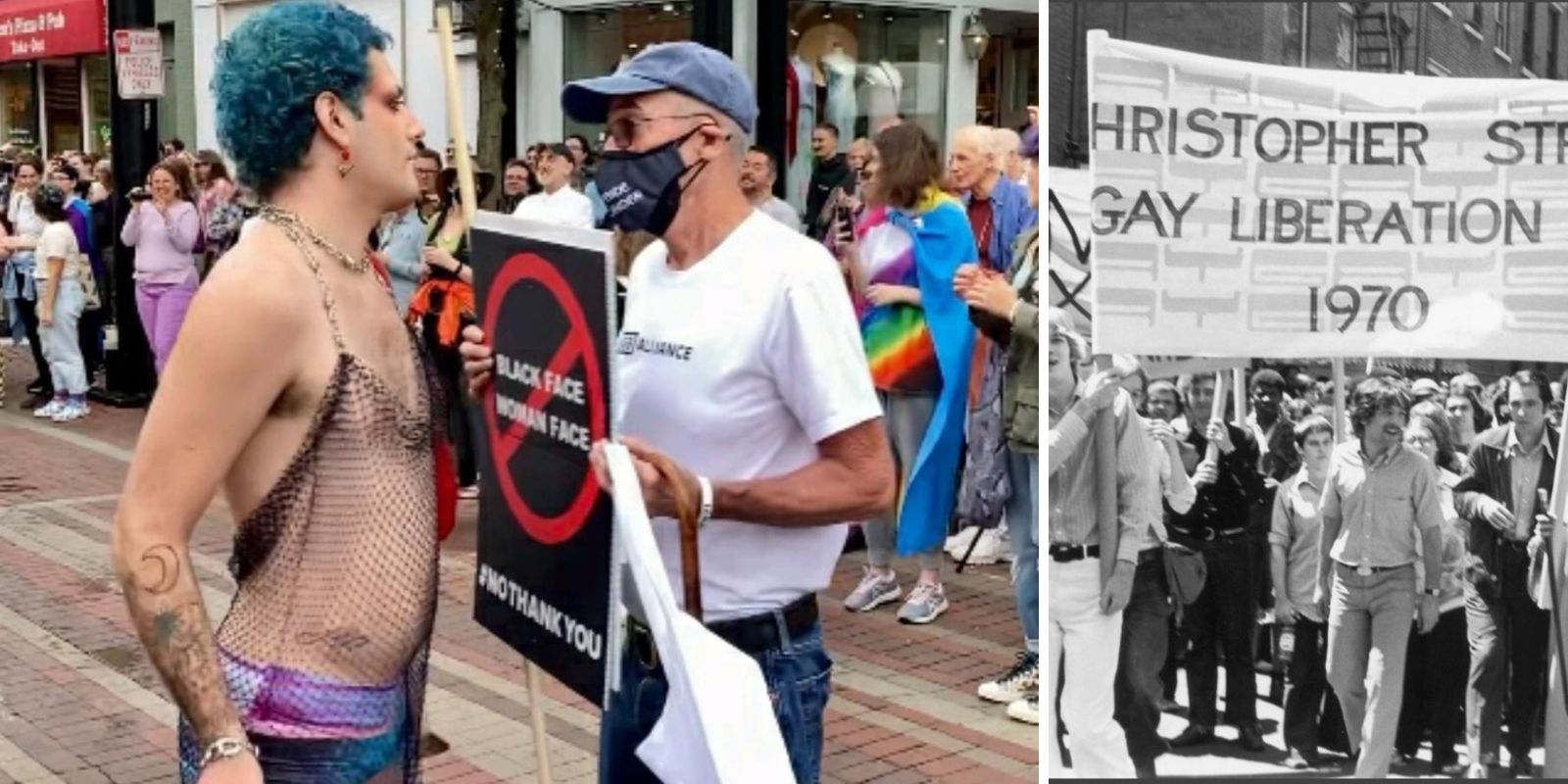 Libby Emmons and Roberto Wakerell-Cruz Montreal QC
Sep 20, 2022 minute read
ADVERTISEMENT
ADVERTISEMENT
74-year-old gay rights pioneer Fred Sargeant, who was present at the Stonewall riots in 1969 and who co-founded the first pride march in New York City in 1970, was beaten and robbed by far-left and trans activists at the pride event in Burlington, Vermont on Sunday. Sargeant was holding a sign critical of trans ideology.

"One fellow that was waving a trans flag," Sargeant said, describing the assault as a guest on the Disaffected Podcast, which will have the full interview, "he saw my sign. And, you know, I wasn't paying much attention to any individual. And he reached out and grabbed it as he went by."

"I'm elderly and disabled," he said. "So with a little bit of adrenaline, I was able to keep up with him and was able to get my sign back." Sargeant went back to where he'd been standing, protesting an event that he essentially helped found 50 years ago. That's when more people came out of the march."

"That's when they swarmed me and surrounded me," he said. "It went on for about 20 minutes, a half an hour, people were trying to block my sign, they were slapping me on the back of the head, they poured coffee on me. They poked me."

"Everybody kind of slid up against me," Sargeant said. "I couldn't move one way or the other. And when I did try to move, somebody would yell, 'you're hurting me!' as though an elderly man with a cane is somehow capable of hurting a young person."

"Eventually, after a couple of attempts to steal the sign from me, and injuring me, leaving bruises on me and a laceration on my hand from one woman, the group knocked me to the ground, and that's one of the pictures that's come out of this: me on the ground, atop my signs surrounded by trans flags." Once it was over, he realized he'd also been robbed. All of his belongings had been stolen as well.

Segreant said he attended the Pride event to protest leftist misogyny, homophobia, and exclusionary policies. "I was met by screaming, multiple assaults, ageist comments, shoving, slaps to the back of my head, pouring coffee on me, and repeated attempts to steal my signs," he said in a Facebook post.

"Being unsuccessful in their attempts to disrupt my protest and drive me away, the mob pushed me to the ground as the parade ended, further injuring me. They stole or damaged more than $550 worth of my property. This is the sign that the young trans/rainbow brownshirts in dresses went absolutely nuts over," he continued.

On Sunday, Sargeant said that he was going to receive medical attention at an ER "to get looked at and bandaged."

Photos show Sargeant with a sign that said: "gay not queer." Sargeant also said criticized the event's organizers, the Pride Center of Vermont, for calling the word gay "erasure of the breadth of sexual orientations and gender identities within the LGBTQ+ umbrella."

Other attendees demanded he leave, likely unaware that they were harassing one of the men responsible for their liberation in the first place. No one came to his defense as he was assaulted.

"As part of the generation of gay men who came after the work Fred and his friends did," Disaffected's Josh Slocum told The Post Millennial "we looked up to them with thanks for breaking the ground for us. I'm horrified and stunned to see what's become of the alleged 'community' I once felt a part of."

For Sargeant, much of the behavior of trans activists comes down to a victimhood mentality. "These are people that believe, or they would like others to believe, that they're the victims in society," he said.

"Transgender people are among the safest demographic in the United States," he said. "Despite what you hear about Trans Day of Remembrance, or all the murders and such. If you're a woman, or if you're a police officer, you are three times as likely to be murdered for who you are than a trans person is. Yet society, for some reason, has bought their story that they are the most oppressed in this country. And it's simply untrue."

They're also rewriting history, he said, debunking the narrative of the Stonewall riots, which trans activists routinely say were entirely attributable to Marsha Johonson.

"Malcolm Michaels was a career criminal, very mentally ill, was committed a number of times to Bellevue and eventually received Social Security for his mental disability. And I know that as a fact, because I knew the man that helped him through the process to get his social security... And he wasn't even there that night. He showed up about an hour after things started. And as he eventually fessed up to years later, when he got there, the bar was already aflame."

LGB Alliance, an organization that defends lesbian, gay and bisexual rights condemned the attack. "We are appalled by the news that Fred Sargeant — Stonewall veteran and co-founder of Pride — has been beaten and robbed at Burlington Pride, by attendees who take for granted the rights he fought for decades ago," they wrote on Twitter.

"Sadly, this despicable act was entirely predictable: activists at Burlington Pride had been distributing stickers like this, and violent rhetoric from that quarter has become so commonplace, they can even justify assaulting a man who needs a cane to walk," they continued, showing a sticker with an anime cartoon character with a sign that reads "if you don't stand for trans rights, you won't be standing much longer."

"Simply put, Fred Sargeant is a hero to all of us who have faced discrimination for wanting to assert our same-sex attraction. It is sad that fifty years later, a new face of homophobia has taken over Pride and now threatens violent retribution," their statement continued.
ADVERTISEMENT
ADVERTISEMENT
fred sargeant