A video of the song "Into the Unknown" from the Disney film Frozen 2 was displayed on the site with a manifesto scrolling over the video condemning the website and the Freedom Convoy. 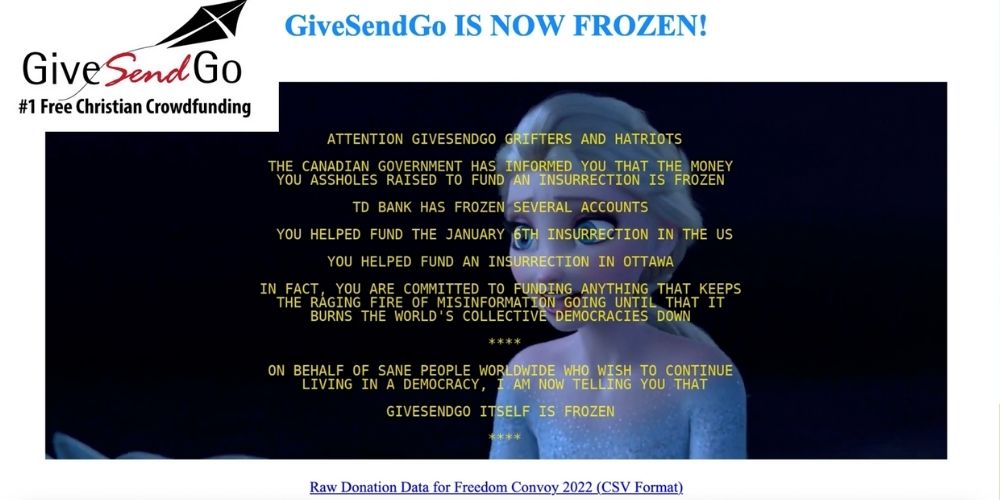 GiveSendGo, the Christian crowdfunding website used by the Freedom Convoy, was hacked Sunday night and was redirecting to the domain GiveSendGone.wtf.

A video of the song "Into the Unknown" from the Disney film Frozen 2 was displayed on the site with a manifesto scrolling over the video condemning the website and the Freedom Convoy.

A file was also posted which was allegedly containing tens of thousands of names of donors to the Freedom Convoy.

Shortly after the hack was noticed and began trending on social media, the website was restored and as of time of publication it appears that GiveSendGo has corrected for the hack.

On Friday, the Ontario government successfully petitioned a court to freeze access to millions of dollars donated through online fundraising platform GiveSendGo for the Freedom Convoy currently in the third week of protesting onerous COVID-19 restrictions in Ottawa and several border crossings.

GiveSendGo has raised over millions of dollar for the Freedom Convoy after GoFundMe banned donations to the protesting truckers.