A single donor gave $215,000 as the world rallies behind the Canadian truckers fighting for freedom. 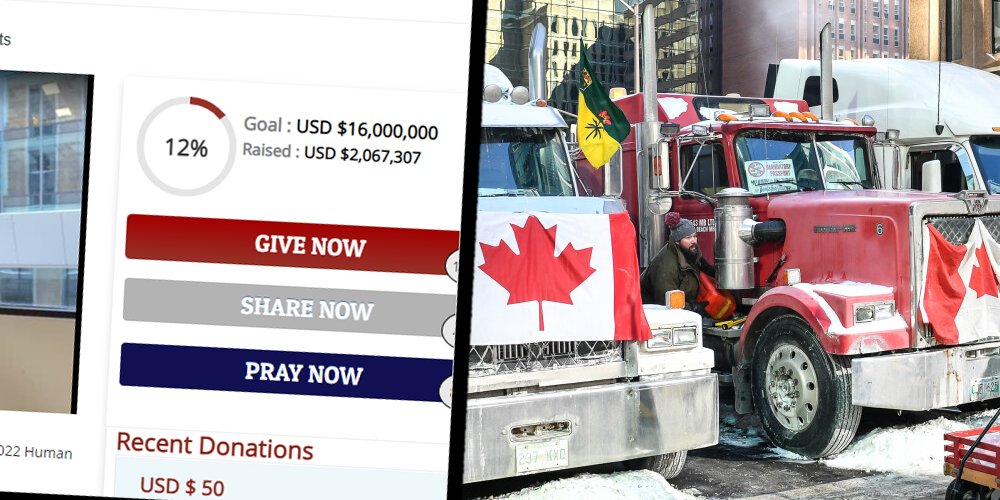 The Freedom Convoy has relaunched its crowdfund on Christian crowdfunding website GiveSendGo after it was unceremoniously canceled by GoFundMe, and has received massive success.

Despite some attempts to DDoS GiveSendGo and prevent the crowdfund from working, the site has managed to provide stable hosting for the crowdfund which has now received over $2 million in donations.

As detailed by Human Events host Jack Posobiec, donors are contributing large amounts of money to support the movement, with one donating as much as $215,000.

As reported earlier today by The Post Millennial, the truckers garnered well over a million dollars within a single day.

GiveSendGo helped convoy organizers set up a new fundraiser on its platform when GoFundMe moved to take down the campaign that garnered $10 million.

As for GoFundMe's decision Friday to deplatform the Freedom Convoy's multi-million dollar fundraiser, the Big Tech company cited "police reports of violence and other unlawful activity" despite little to no documented evidence involving the largely peaceful demonstration entering its second week of protests.

Street crime has reportedly fallen in downtown Ottawa since the start of the Freedom Convoy protests where the demonstrators have installed themselves.

GoFundMe has since been called out for providing a platform for Antifa extremists while censoring right-wing causes. Gov. Ron DeSantis vowed Saturday he will work with Florida's attorney general to investigate its "deceptive practices."

Video-sharing alternative Rumble is now offering help to GiveSendGo, which is reportedly struggling with server problems due to the massively popular fundraiser. There's also concern GiveSendGo is experiencing a DDoS attack.