The crowdfunding site has allowed numerous campaigns supporting Antifa extremists to remain on the fundraising platform. 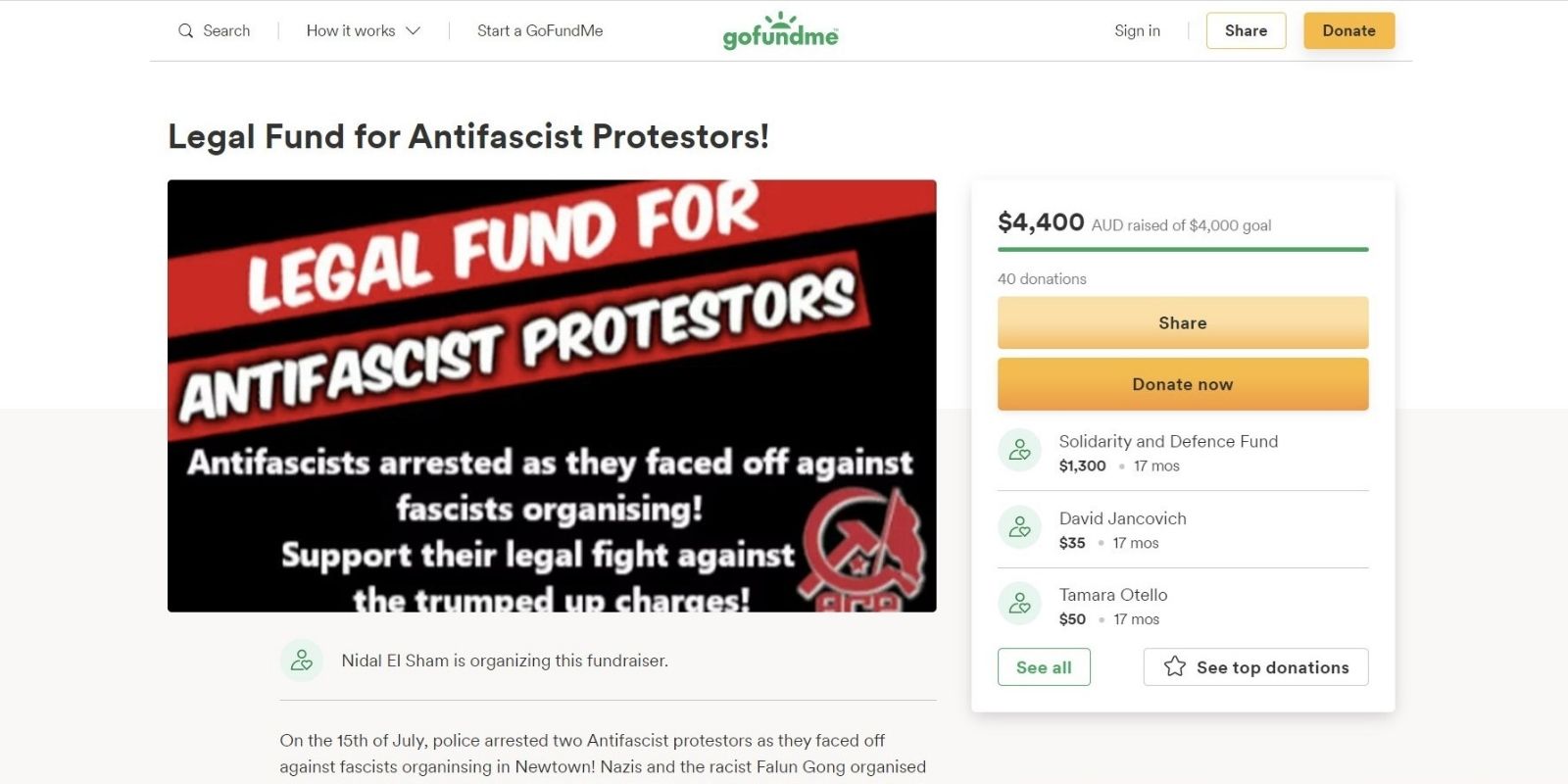 GoFundMe shut down the Freedom Convoy's multi-million dollar fundraiser, citing "police reports of violence and other unlawful activity" despite little to no documented evidence. However, the crowdfunding site has allowed numerous campaigns supporting Antifa extremists to remain on the fundraising platform.

$4,400 has been raised for an active GoFundMe legal fund supporting two Antifa counter protestors who were arrested by police on July 15, 2020, outside the Newtown Court House in Australia. Antifa's forces had clashed with demonstrators gathered to oppose the Chinese government after a man was charged for cracking a whip outside the Chinese embassy, according to The Daily Telegraph. One of the arrestees was charged with assaulting police, the GoFundMe page says.

Solidarity and Defence Fund, which bails out far-left activists arrested during direct action, donated one-third of the campaign's total contributions. "Best wishes with the legal defence comrades," the group comments under "Words of support."

A fundraiser with a $100,000 goal launched in February 2021 helps Antifa activists in Texas. "We believe that the oppression of marginalized persons and people of all colors and genders is wrong. We need your help to advance our cause in a state where the fight intensifies daily. We can win!!!" the description reads.

Another "solidarity call" on GoFundMe to Antifa comrades in Germany is asking for 1000 euros as "a basis for anti-fascist work in Trier and the surrounding area" plus 500 euros, "half of which is forwarded to two other stable organizations."

A GoFundMe page is still online for a 2016 "antifascist festival" set in Miami, Florida. The organizer asks in the fundraiser's description for money to fund "one of the most prominent Antifascist bands in the world" from Chile, slated to play in late June 2016 so that the group "can spread Antifascism through the conscious music of Curasbun, and especially to Spanish speaking young people." The band performs songs about "antifascism, police brutality, and the Palestinian struggle."

The pro-medical freedom Canadian trucker convoy raised millions of dollars before GoFundMe moved to deplatform the effort. Christian crowdfunding website GiveSendGo has since agreed to host the Freedom Convoy donations.

GoFundMe has a history of targeting right-wing causes while it has broadcasted far-left campaigns. The company supported the Antifa-occupied CHAZ/CHOP following slayings in the lawless space. "In a community with no police, this farmer is feeding people & bringing them closer together," GoFundMe promoted.

The massive trucker protest has rallied citizens, regardless of vaccination status, in a grassroots movement for the people in defiance of an oppressive government. It started as a protest against mandatory vaccination for truckers while Prime Minister Justin Trudeau attempted to paint the Freedom Convoy as "a fringe minority" and critics tried to frame the demonstration as Canada's own Jan. 6.

Despite the smear tactics, the peaceful demonstrators had confronted a masked man who appeared with a Confederal Flag last weekend and demanded he leave.