"The important thing to remember is to NEVER talk about the number of gender clinics for children, instead talk about hoax phone calls and bogus threats. Deflect, lie and invent and when the facts just don't quite add up, you can always lie," Alix Aharon said sarcastically. 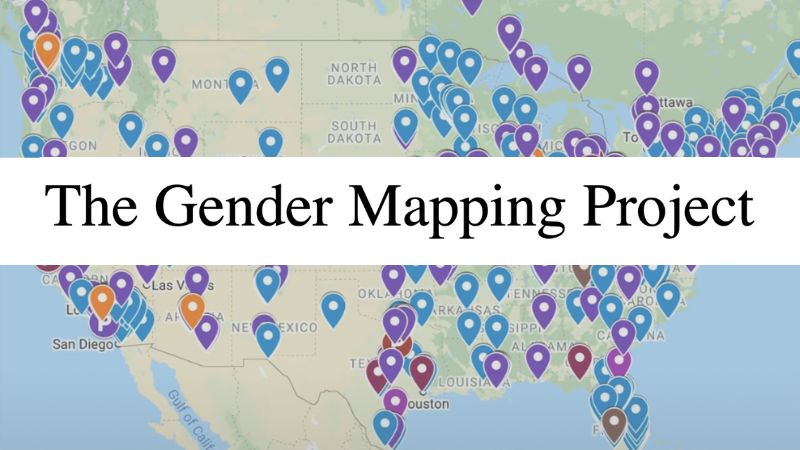 Libby Emmons and Hannah Nightingale
Oct 18, 2022 minute read
ADVERTISEMENT
ADVERTISEMENT
A map charting the locations of clinics and hospitals offering medicalized gender transitions and other gender identity-centric treatments has come under attack by gender ideology proponents, who say that this map is "dangerous."

The map was taken down by Google after trans activist backlash, Alix Aharon told The Post Millennial. Documentation from a group of parents of trans-identified children and teens confirms that they worked to get Google to take it down as well. They called the map the creation of a "terrorist organization."

The map caught the attention of a Facebook group for parents who are looking for support from one another to medically and socially transition their children and teens to live as the opposite sex. The parent who posted a link to the Gender Mapper project was horrified, saying that it was "anti-trans information," which "directly affects" the members of the group. Their concern was that the map could be used by "extremists" to report on clinics and hospitals that propagate and promote the medical gender transition of children and teens.

Replies to that post reveal that one of the parents in the group reached out to a family member who works at Google to find out how to get the site taken down, and discovered that it was, in fact, under review by the tech giant. Another parent reveals that at least one of the doctors listed by Gender Mapper is engaged with the medical gender transition of children, and that this parent's child is among that doctor's patients. 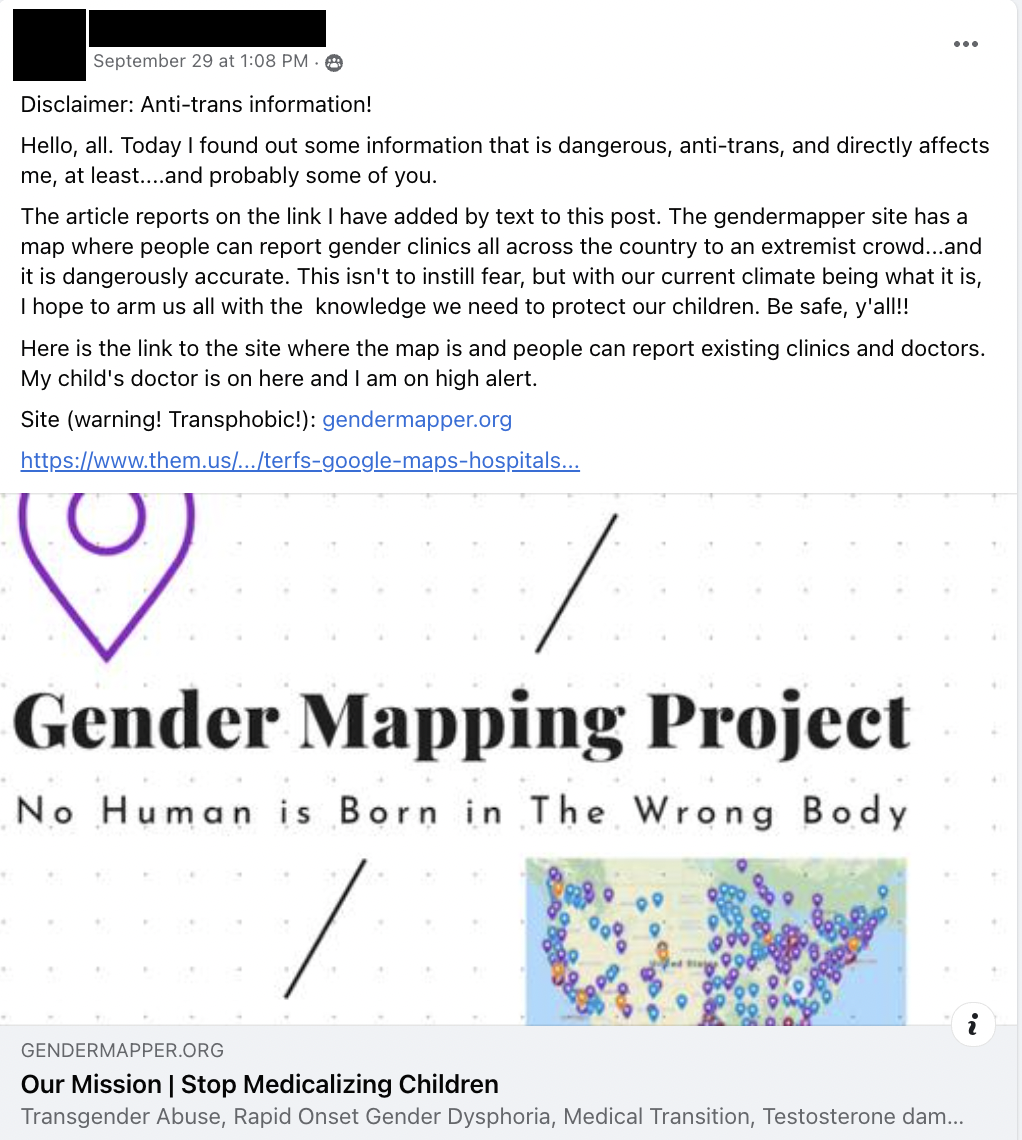 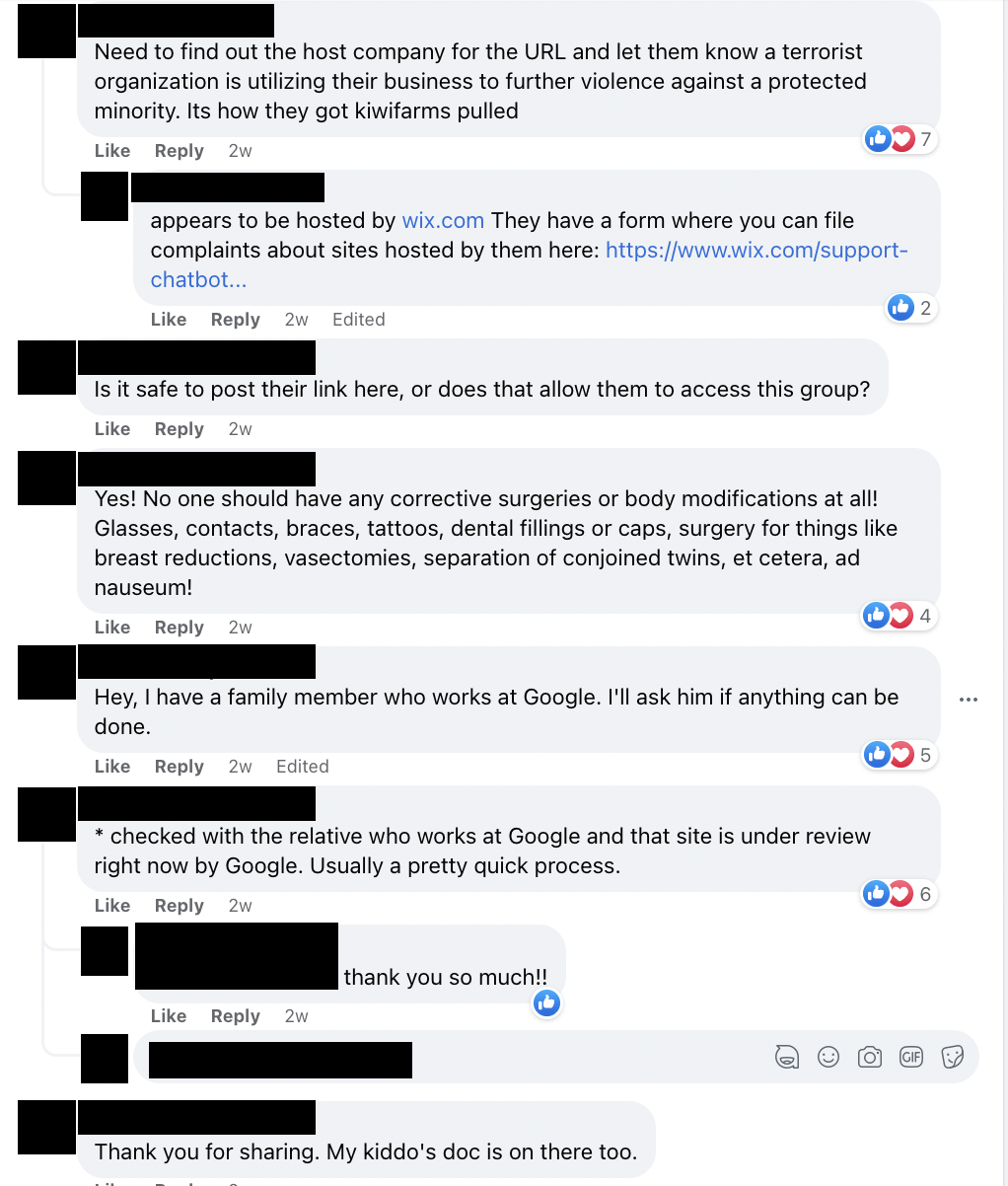 The map is a database of all gender clinics for adults and children across the US, with data being collected by volunteers who work in secret, collecting evidence from local hospitals and clinics, according to the Gender Mapping Project’s website. A similar map was published by trans activists, but that map remains up.

The map shows the various locations of gender clinics across the US, much as pro-abortion movements have issued maps showing where abortion clinics are located. Yet this map has been accused of being hateful and of targeting the locations for harassment.

The project states that the data displayed is always 20 days behind their current data, "to preserve the secrecy of the project."

"We are constantly told that no one is doing surgeries on children and that no one is prescribing cross-sex hormones to young children. We refute those claims with evidence," the website states.

This map has come under fire from left-leaning outlets, which claim that this aggregated map is "transphobic" and creates targets for potential "attacks."

In an article published by the Daily Dot stated that the "Gender Mapping Project’s map was lifted from one a transgender activist created to help people find hormone replacement therapy (HRT) providers."

Trans woman and activist Erin Reed posted about Aharon’s map in 2021 shortly after it started, saying that the project had "copied my informed consent map," and that "this d*ck is using it for hate."

"I am enraged. I made my informed consent HRT map specifically for people dealing with poverty or lack of access to be able to obtain their hormones after a move, or obtain without going through a year of therapy that they can't afford," Reed wrote, calling for ways to report an "abusive map" to google.

Reed told the Daily Dot that the project’s map equates to "a targeted hit list of doctors, organizations, and clinics that serve LGBTQ+ people."

The article also singles out both Aharon and Libs of TikTok account holder Chaya Raichik, who the Daily Dot calls "homophobic and transphobic social media influencers."

On Twitter, Aharon noted that both herself and Raichik are Jewish, and that "Any Jew who reads this knows the score, if there are two Jewish women involved in something, they MUST be linked somehow. Despite the fact that me and Raichik don't know each other, somehow we are connected in a blood-libelist conspiracy fashion."

"Reed and other trans activists worry that others will use the map to intimidate, harass, or commit violence against care providers and their clients. This possibility seems entirely possible considering that death and bombing threats have targeted at least two gender-affirming hospitals so far," the article adds.

"The important thing to remember is to NEVER talk about the number of gender clinics for children, instead talk about hoax phone calls and bogus threats. Deflect, lie and invent and when the facts just don't quite add up, you can always lie," Aharon wrote on Twitter in response to the outlet’s article.

Speaking with The Post Millennial, Aharon noted that the project incorporated around 4 different maps into their map, but that these maps had been vastly expanded upon, with thousands of pins across the globe being added by volunteers.

Additionally, though Aharon's map has been taken down by Google, Reed’s map still remains up, with Reed allegedly adding some of the pins that were included in the project’s map. The project's Facebook and Twitter pages have also been shut down.
ADVERTISEMENT
ADVERTISEMENT
Gender Mapping Project