"The physical conditions described by my friends of these inmates can only be described as inhumane, lacking access to their attorneys, to evidence, families and even proper nutrition," said Gosar. 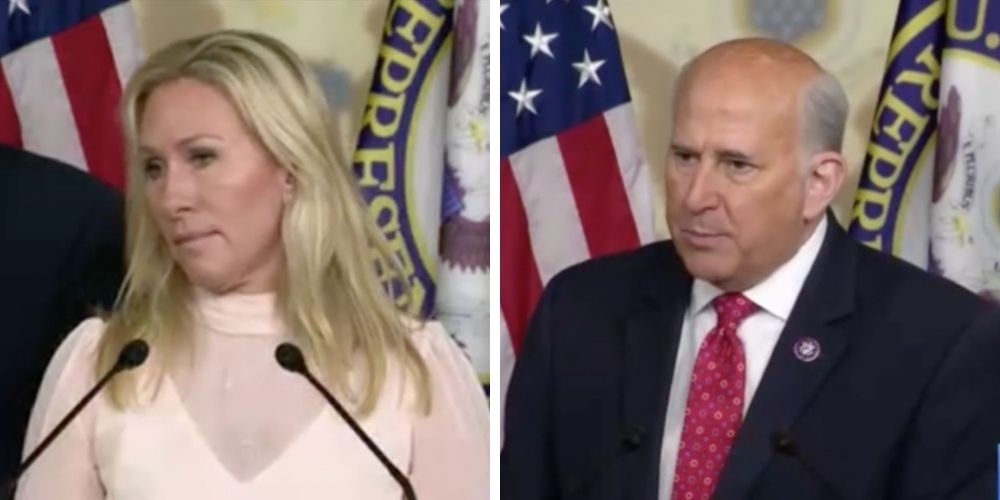 Rep. Marjorie Taylor Greene, Louie Gohmert, Matt Gaetz, and Paul Gosar spoke on Tuesday to give insight into the conditions under which defendants charged in the Capitol riot of January 6 are being held.

Greene said the defendants are being told to "denounce President Trump," and that "their views are the views of cult members."

She said that prisoners are being held in solitary confinement for 22 to 23 hours per day, and are forced to wait to use the bathroom hat long until they are let out of their cells.

"They're being forced fed gluten food and they have celiac disease. And so the food that they eat makes them sick every single day to the point where they will go without days. Go days. I'm sorry. days without eating in order to just feel better because they were they are not given better food. I think we can clearly see that there is serious abuse happening here," Greene added.

Greene also noted that public defenders for those that can't afford attorneys are being forced to denounce President trump, denounce their political views, and "watch videos and read books that basically is critical race theory training in order for them to have this public defender represent them."

"As Marjorie and I toured the DC jail, some of the conditions were so astounding. I asked more than one guard if have you ever worked in a facility that had these kind of problems? And quietly they would say never, no," said Gohmert. "It is outrageous."

"The condition of solitary confinement has been so often struck down as inappropriate, and yet the DC jail has gotten away with it," he continued. "For such things as, how dare you demand to talk to your lawyer in person because now we will have to put you in solitary confinement. We'll call it quarantine for two weeks."

Gohmert said that if the January 6 defendants speak with their attorneys in a rooms separated by plexiglass, they will need to be locked up in solitary confinement for 14 days.

"You'll look at his hand and it's obviously dark. Looks like it's going toward gray or black. You know, that's normally leading toward amputation when it gets that bad, but I haven't given him proper medical care," Gohmert said of an older gentleman being held under charges that he possessed a gun on January 6.

"Another inmate had his finger going just sideways at the last point. He said it was broken by one of the guards and they won't allow him to get medical care for that. They're just all kinds of things," said Gohmert. "They're the refusal to allow them to have haircut or shave is a they're creating people that look like the Unabomber."

"The physical conditions described by my friends of these inmates can only be described as inhumane, lacking access to their attorneys, to evidence, families and even proper nutrition," said Gosar.

"These inmates are suffering disproportionately for long periods of isolation from the outside world. Many inmates continue to describe harrowing stories of being held in confinement for 19 to 20 hours a day, and only being allowed outside for a mere two days a week," he continued.

"They are being denied the right to attend chapel in a religious service. They aren't even allowed communion. Many have described having to burn their hair by utilizing harsh chemicals to even trim. Others have no access to toilets. And then you share share horrible stories of lacking adequate medical treatment," he added.

Gosar stated that these inmates are not "hardened thugs, murderers, or gang members," "These are dads, brothers, veterans teachers. All political prisoners who continue to be persecuted endure the pain of unjust suffering."

The group of Congress members called for action to be taken on these unjust conditions, and noted that all footage of January 6 needs to be released.

"We need all of the videos that anybody has, but it's the federal government. I don't understand why our speaker is trying to hide evidence while they run around looking for anything that might help them make Republicans look bad," Gohmert said.

"I think it's very clear to Marjorie and and me that what the courts have gotten is not accurate and it will not be until some federal judge forces Speaker Pelosi and the Capitol Police to release every hour of video that we will have an accurate picture about who did what, because they haven't gotten it so far," Gohmert continued.