McCarthy released a statement demanding an investigation into the NSA in the wake of allegations from Tucker Carlson that the agency has been spying on him and his Fox News show. 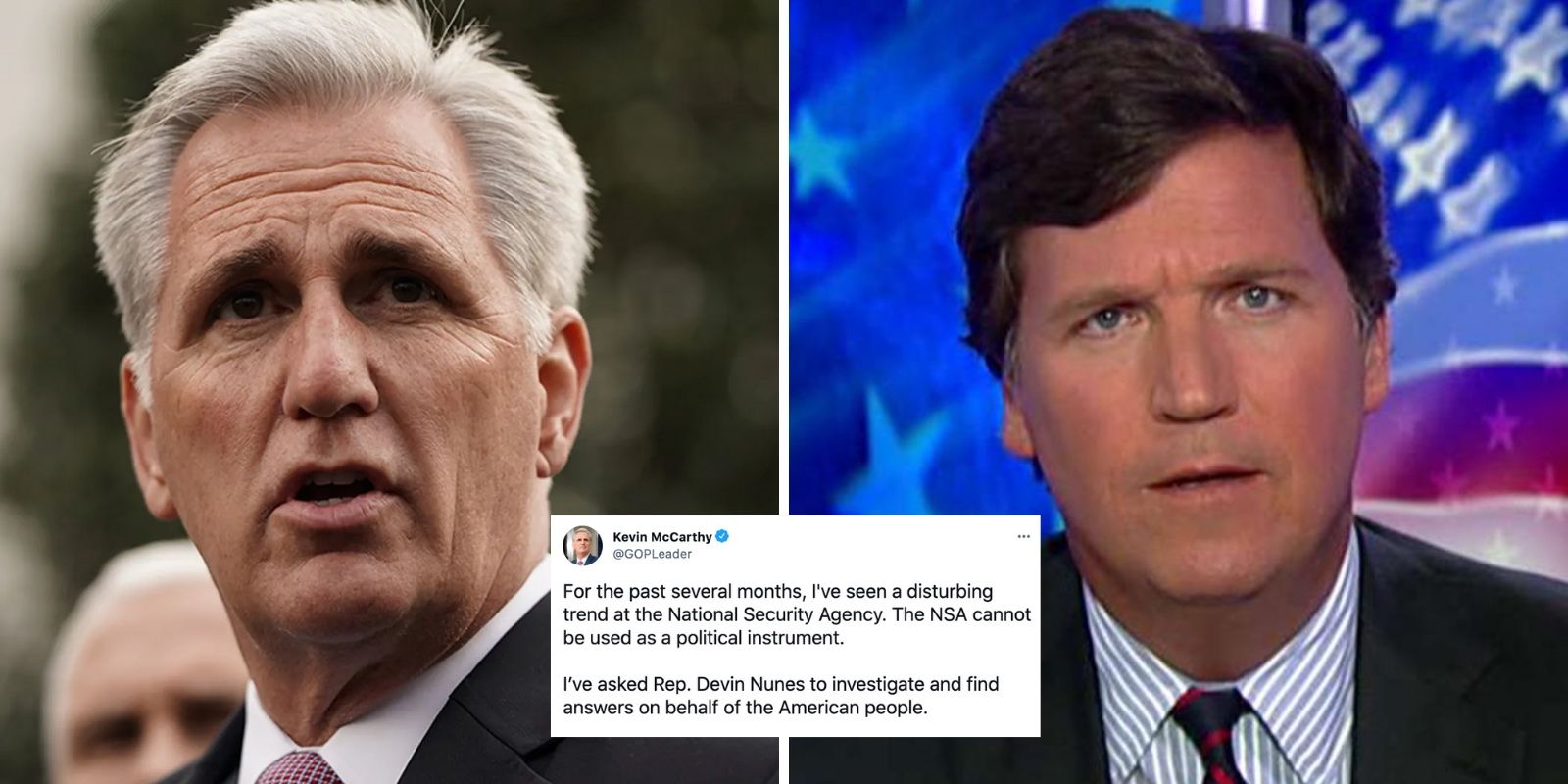 House Minority Leader Kevin McCarthy released a statement on Wednesday demanding an investigation into the NSA in the wake of allegations from Tucker Carlson that the agency has been spying on him and his Fox News show.

McCarthy said that "For the past several months, I have seen a disturbing trend at the National Security Agency."

"Earlier this year, I sent a letter to Secretary of Defense Austin expressing concern over the politicization of the Agency through the sidelining of Michael Ellis as NSA General Counsel. I asked that Mr. Ellis be reinstated and expressed my concern regarding undue political influence in NSA placing Mr. Ellis on administrative leave.

"Separately, it has recently come to my attention that NSA has refused to deliver information requested by the Republican Members on the House Intelligence Committee who are trying to fulfill their oversight responsibilities.

"Now, there is a public report that NSA read the emails of Fox News host Tucker Carlson. Although NSA publicly denied targeting Carlson, I have serious questions regarding this matter that must be answered.

"Given this disturbing trend, I've asked HPSCI Ranking Member Devin Nunes to investigate and find answers on behalf of the American people. The NSA cannot be used as a political instrument, and House Republicans will ensure accountability and transparency."

Tucker Carlson broke the news earlier this week that a whistleblower had contacted him and said that the NSA has been spying on him. Carlson has made this the subject of a few programs, so far.

Carlson claimed that the whistleblower added to his credibility by sharing information that could have only been known to someone with access to Carlson's personal text messages.

"The whistleblower, who is in a position to know, repeated back to us information about a story that we are working on that could have only come directly from my texts and emails," Carlson explained. "There was no other possible source for that information period."

Fox News filed a Freedom of Information Act (FOIA) request Monday morning asking for all of the information that the NSA and other agencies have gathered about Tucker Carlson’s show. Fox News also contacted the press office at both NSA and the FBI, attempting to get to the bottom of the allegations.

The White House and the NSA responded to the allegations. When White House Press Secretary Jen Psaki was asked about it, she simply described what the NSA does.

"Well the NSA," she said, "is an entity that focuses on foreign threats and individuals who are attempting to do us harm on foreign soil. So, that is their purview, beyond that I would point you to the intelligence community."

The NSA responded, as well, and they also didn't deny it.

"On June 28, 2021," the statement reads, "Tucker Carlson alleged that the National Security Agency has been 'monitoring our electronic communications and is planning to leak them in an attempt to take this show off the air.' This allegation is untrue. Tucker Carlson has never been an intelligence target of the Agency and the NSA has never had any plans to try to take his program off the air."

"NSA has a foreign intelligence mission. We target foreign powers to generate insights on foreign activities that could harm the United States. With limited exceptions (e.g. an emergency), NSA may not target a US citizen without a court order that explicitly authorizes the targeting," the NSA statement concludes.

Carlson said that the statement "comes with this non sequitur, in part, quote, 'Tucker Carlson has never been an intelligence target of the agency.' Okay, glad to know."

"But the question remains, did the Biden administration read my personal emails? That’s the question that we asked directly to NSA officials when we spoke to them about 20 minutes ago in a very heated conversation. Did you read my emails? And again, they refuse to say, again and again. And then they refused even to explain why they couldn't answer that simple question. 'We can't tell you and we won’t tell you why we can't tell you,'" Carlson relayed.

Carlson concluded, saying, "Orwellian does not begin to describe the experience, it was like living in China. But we should get used to it. Now that the Biden administration has classified tens of millions of patriotic Americans, the kind who served in the military and fly flags in front of their homes, as potential domestic terrorists white supremacist saboteurs, we’re gonna see a whole lot more of this kind of thing. A whole lot more."