How to come back from a #MeToo moment

Men and women will be wary of trusting one another until we reject the empty zealotry and cynicism on both sides of this issue. 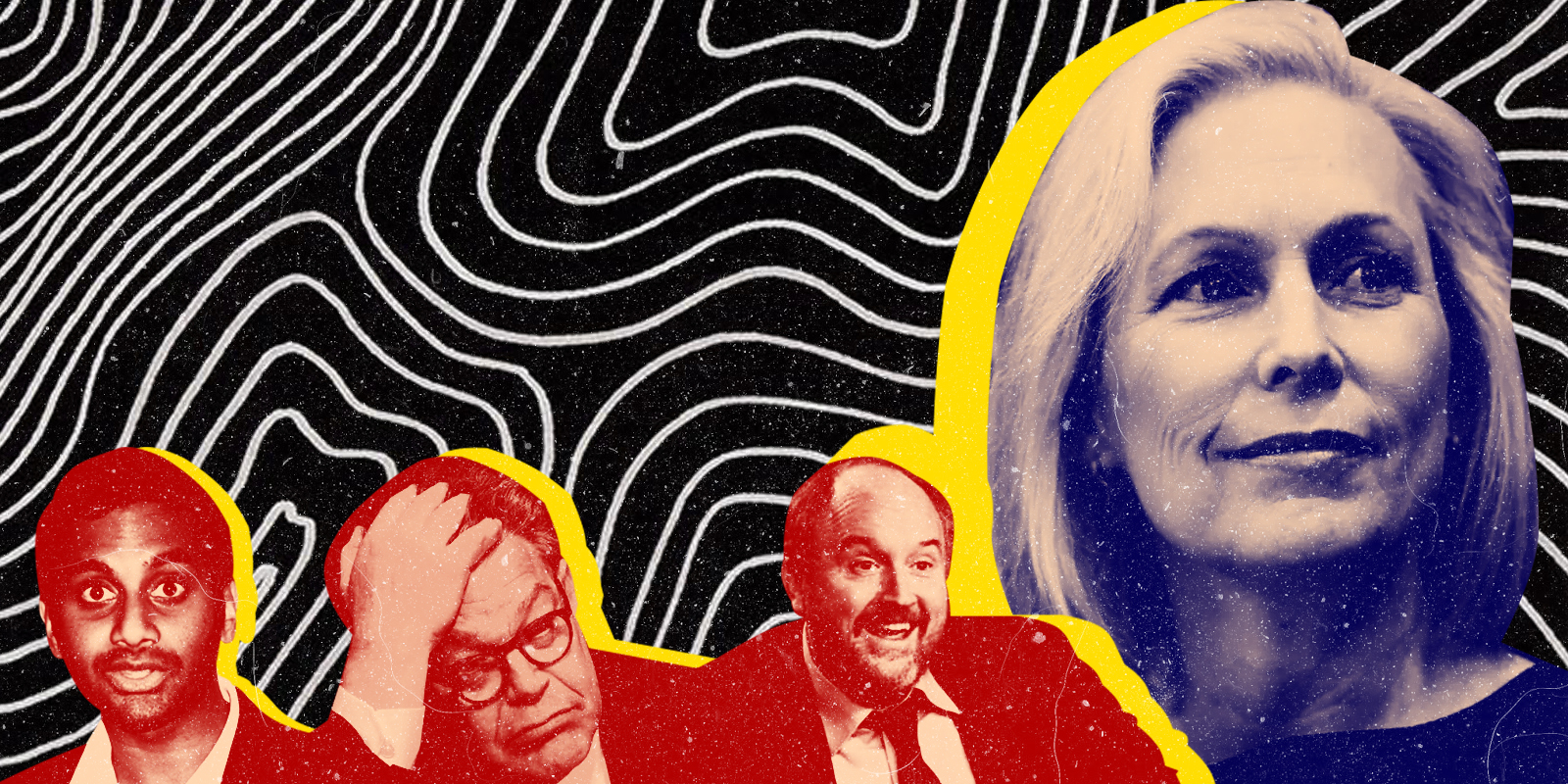 Kirsten Gillibrand has some words for men who want to claw their way back from having been #MeToo’d. She told Bustle: “For any person who wants to start over, you just need to start with an ounce of humility, to say you were wrong and you’re sorry and that you want to do better and do right by this community … People will accept that, they will allow it, they will welcome you.”

Is it worth taking Gillibrand’s advice on how to get back into society’s good graces?

Let’s say you’ve been #MeToo’d. Presumably, you’ve done something wrong. Maybe it was something really wrong. But it did not rise to a criminal level. After this all came to light, fingers were pointed, you were shamed on social media, blacklisted by your friends and associates, promised that you would never work in this town again.

There wasn’t exactly a sentence meted out, because there wasn’t any due process, but you feel you’ve served your time, lost some livelihood, downgraded your lifestyle, tightened your belt, and you’re ready to get out there and give life and career another try.

What do you do first? Let’s begin with Gillibrand’s first step: Start with an ounce of humility.

You can’t be humble right away, first you have to let the internet kick you while you’re down. Once you’ve done that, take a deep breath. You’re ready to admit that you’ve screwed up. You know it because the whole world told you so, and now all you’ve got is shame. Take that shame and turn it into humility.

Beaten down and ratioed in real life, the next step is to say you’re sorry. Say you were wrong. Let the world know they were right when they said you were worthless. Let everyone know, maybe on Instagram or someplace, that you want to do better and you will. You appreciate your opportunities and most of all your privilege. And you want to “do right by this community.”

Of course, none of this advice has worked in the #MeToo era as of yet. But now that Gillibrand is suggesting it, we’re sure that’s going to change. After all, she was one of the original cheerleaders of the Title IX overreach that led to hundreds of young college men (and women) getting falsely accused, unfairly punished, and then suing their former universities. She took down Al Franken. She’s definitely to be trusted on this.

A recent sympathetic essay about Franken, from Jane Mayer in The New Yorker, offered some help for the recently #MeToo’d, seeming to indicate a way forward. Cathy Young writes “But partisan though it may be, Mayer’s piece is a step in the right direction—that of tempering the #MeToo movement’s laudable concern with sexual violence and abuse of power with a genuine commitment to a presumption of innocence and a more realistic view of sexual dynamics.”

Young, however, also points to the hypocrisy of Mayer for holding Franken to a different standard than Brett Kavanaugh. It’s hard to miss.

Mollie Hemingway, who covered the Kavanaugh hearings in detail, recognizes Mayer’s hypocrisy for what it is. In The Federalist, she writes: “Of all the people in the world who are in a position to write an article poo-poohing Al Franken’s problems or fretting about journalistic excesses, Jane Mayer may be the very worst choice. That’s because she has repeatedly published unsubstantiated allegations of sexual impropriety against her political opponents.” And there it is. This is the great unsaid truth of the #MeToo movement—it’s largely political.

Does Mayer think there’s a way forward for some but not others? For Mayer it seems to be based on partisanship. But can we understand this rationale in a more useful way?

Let’s look at some examples.

Charlie Rose was #MeToo’d. He contritely and humbly apologized: “I always felt that I was pursuing shared feelings, even though I now realize I was mistaken. I have learned a great deal as a result of these events, and I hope others will too. All of us, including me, are coming to a newer and deeper recognition of the pain caused by conduct in the past, and have come to a profound new respect for women and their lives.”

The response from throughout the media world was a chorus of “not good enough!” and he remains cancelled to this day.

After Louis C.K. apologized and vowed to do better, he was welcomed back to the entertainment community by basically no one. His apology was taken as an admission of guilt, a reason to shun him further. Mashable listed all the things wrong with his apology. Twitter activists mocked and shamed him.

It’s clear that people outside of the world of online activism genuinely want Louis to come back and are thrilled when he makes a rare appearance. But the outlets, venues, and production companies remain too spooked to give him a chance at a comeback.

In fact, evidence suggests that not apologizing is the best way forward. This is specifically because the internet is filled with mean-spirited bullies who will mock you for suffering, and for saying you’re sorry. “Inadequate! Mediocre! Human garbage!” they all shriek. They will call you problematic and they will insist that you remain cancelled. Because it’s what you deserve, you admitted your guilt, after all. And if you dare to express your desire to see a former fave make a comeback, then you’re cancelled too.

Aziz Ansari, in his Road to Nowhere Tour, specifically did not apologize. And for that he was lauded. “He was very careful in his wording: he never used the words ‘I’m sorry.’ This gave his message so much more weight. He wasn’t telling anyone what they wanted to hear—just what he was genuinely feeling.”

Ryan Adams gave “the Gillibrand method” a shot. The singer who was accused of being a shitty boyfriend and manipulative artist wants a second chance, and he said so right on Instagram.

You might note that he’s trying to do right by this community. But this was not appreciated by anyone. Jezebel scorned. He’s following the rules, isn’t he? He writes: “I’ve tried my best to be open and accountable. Not a billboard. I mean, maybe for being flawed. I’ve always wanted to help. I’m trying… I’m here for the music, for the love and for making things better.”

He wants to be held accountable: check; humility: check; tries to make things better: check. Redemption? We shall see.

Even the current U.S. President has managed a “comeback” from his various #MeToo moments by refusing to apologize. In fact, Trump is a great example of how to deal with #MeToo. It’s called denial and avoidance. Trump maybe or maybe did not do all the things he’s accused of, but he won’t even deal with it. He gives no satisfaction to anyone but himself. Narcissistic? Sure. But in reality, it’s the only strategy that’s worked.

Where does that leave the average guy who has been #MeToo’d? Do you go with Gillibrand’s methods or Trump’s? Perhaps if we valued real honesty and empathy, there would be a definitive path forward. For now, it appears things will unravel as quickly as they came together.

The recent case of Andy Signore is worth taking note of. #MeToo’d in 2017, Signore, a popular internet celebrity and creator of Screen Junkies, was smeared throughout the press as an abuser by a woman with whom he’d had a brief affair. He was presumed guilty of sexual misconduct in the eyes of the media, based entirely on the unverified allegations. There was zero due process, zero investigative journalism.

Here’s the unexpected thing. In the eyes of the internet, it worked. The overwhelming response to Signore’s debunking of the case against him was positive. His false accuser was exposed as a fraud. It appears that people are no longer blindly believing allegations, and are willing to hear out the #MeToo accused, once those accused are allowed to present evidence in their defence.

In this case, Signore apologized. He just didn’t apologize to his false accuser or to the media or to all women. He apologized to his family and loved ones for making choices that hurt them and for minor infractions, ignoring proper boundaries with inappropriate flirting. As for the malicious and opportunistic people, he simply proved them wrong. Perhaps this approach will provide a roadmap for others in his situation.

In the case of Signore, facts and due process seem to matter again. Facts and due process did not matter for Stephen Galloway or Stephen Elliott. They did not for hundreds of college kids who had regrettable hookups. These principles did not matter for Louis C.K. or Charlie Rose. Perhaps they will for Ryan Adams? One thing that’s certain is that people are slowly starting to recognize the human damage of the moral panic that fuelled the #MeToo movement.

For all of the good that #MeToo may have done in convincing men to treat women less like objects and more like human beings, it is a flawed movement. It was flawed precisely because it has not given the accused, or even the culpable, a chance to put what they had learned into practice.

Part of this too—and the part that no one wants to talk about in the rush to #BelieveAllWomen—is that #MeToo can be a path to professional advancement for unscrupulous people. No one wants to hear it, but to say otherwise denies women’s agency to make calculated decisions. When victimization becomes a career path, women who would in other cases make definitive and shrewd choices, may make this one. It’s probably not a good idea to point that out.

Gillibrand promised #MeToo’d men that if they are humble, honest, and apologetic, the “people will accept that, they will allow it, they will welcome you.” The evidence suggests that Gillibrand is wrong. Perhaps there will be a time in the near future when her words won’t ring empty, but it will require work on both sides of the panicked cultural moment in which we find ourselves. Men and women will be wary of trusting one another until we reject the empty zealotry, cynicism, and politicization on both sides of this issue. Perhaps Kirsten Gillibrand and Jane Mayer would like to lead the way. After all, they’ve taken so many people down, perhaps they are interested in helping them back up.