'I orchestrated it': Ray Epps texted his nephew on Jan 6: report 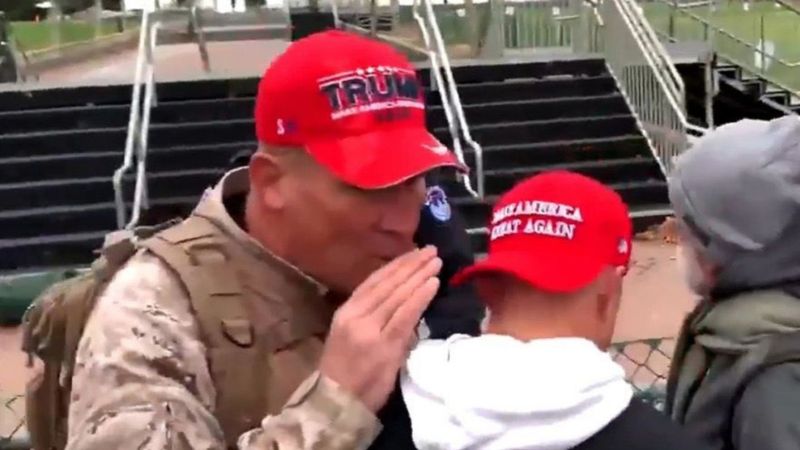 Ray Epps, the man who was filmed at the Capitol in the lead up to January 6 saying, "We need to go into the Capitol," texted his nephew on January 6 that he "orchestrated it" as protestors breached the Capitol building that afternoon.

According to the January 21, 2022 transcript of Epps' interview with the January 6 Committee, he was texting his nephew Dalin and said, "I was in the front with a few others. I also orchestrated it."

Someone in the crowd exclaims, "what?" in response to Epps followed by a collective shout of "No!" and "Fed! Fed! Fed!" in Epps' direction.

The next day Epps' was videographed saying to the crowd, "Okay folks, as soon as the president is done speaking, we go to the Capitol."

Dinesh D'Souza tweeted out the highlight of the transcript.

Epps answered, "I just meant that I got -- you have to understand our relationship, uncle-nephew. We hunt together. We have fun with each other. We do that kind of stuff."

"What I meant by 'orchestrate,' I helped get people there," Epps added.

Epps was briefly on the FBI's wanted list but was quietly removed in the months following the Capitol's breach. Epps later spoke twice to the January 6 Committee. A spokesman for the committee said in January, "Mr. Epps informed us that he was not employed by, working with, or acting at the direction of any law enforcement agency on January 5th or 6th or at any other time and that he has never been an informant for the FBI or any other law enforcement agency."

Epps told FBI agents that he went to Washington to express his concerns about the 2020 presidential election and to support Trump and claimed, "I am guilty of being there and probably trespassing."

He later said he was "trying to calm" the others down.

In the newly released transcript Epps claims to have left the Capitol before the breach and to have gone back to his hotel room by the time he texted his nephew.

"On the night of January 5, 2021, Epps wandered around the crowd that had gathered, and there's video of him out there chanting 'tomorrow, we need to get into the Capitol.' This was strange behavior," Cruz said, "so strange that the crowd began chanting 'fed fed fed.'"

"Was Ray Epps a fed?" Cruz asked and Sanborn could not answer.

In January outgoing Congressman Adam Kinzinger tweeted out "He didn’t enter the Capitol on Jan 6, and was removed from the most wanted list because apparently he broke no laws."