If trans activists can make this link in people's minds, then the idea that violence against Rowling and women should be used to stop violence against trans identified biological males will not be far behind. 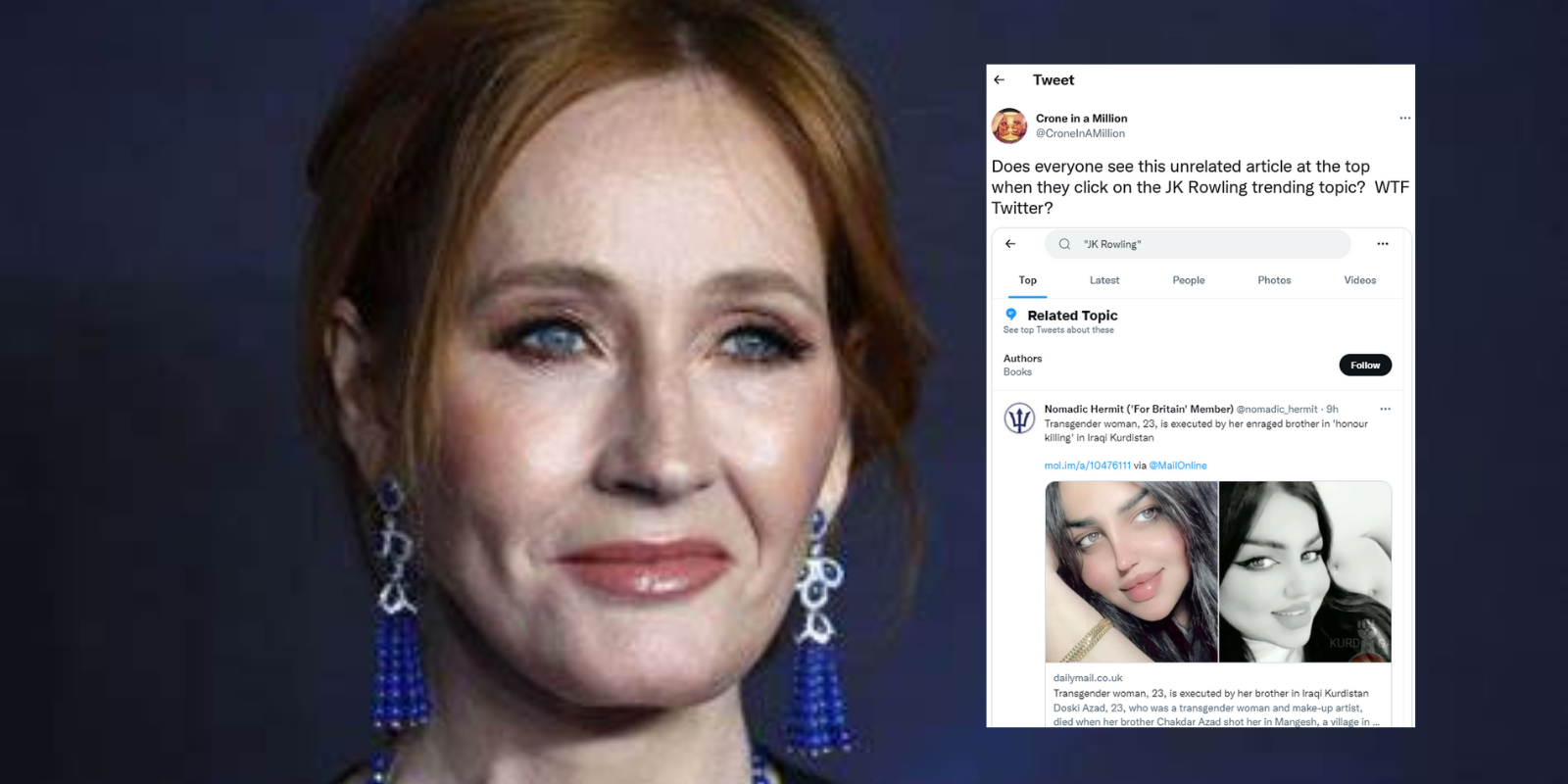 After reports emerged from Kurdistan that Doski Azzad, a biological male who identified as transgender, was murdered by her brother, famed author JK Rowling's name began trending on Twitter in association with the story.

Rowling is not mentioned in the story, and was not affiliated with with Azad or Azad's killer. It is unknown just why Twitter would have linked this gruesome story with Rowling.

The only seeming explanation is that someone at Twitter decided intentionally to link these accounts in order to make a political statement against Rowling, who is a staunch supporter of women's rights, a believer in biological science, and has repeatedly defended women's rights to have sex-segregated spaces such as washrooms, change rooms, and the like.

Rowling has been held up by misogynists across the internet and trans activists globally as a transphobe, simply because she has expressed support for women's rights with no reservations.

Rowling has been threatened, harassed, doxed, and defamed for her efforts to speak for women who have had been harshly maligned, had their careers ruined, or even been arrested or questioned under caution for stating their belief that men and women are different and that no amount of surgery, medication, or lipstick can change that unalterable fact.

Women who also believe in women's rights, to the exclusion of males who seek to embody them, have seen Rowling as a hero because she has used her substantial platform to speak for women and to defend women's rights to speak for themselves.

This linking of Rowling to a heinous murder, done behind the scenes at Twitter and not because she is in any way associated in real life with either the victim or the killer, is an anonymous attack for which there is no recourse.

Women tweeted out their concern that Rowling was linked to this murder either intentionally or through some bizarre algorithmic formula. There is no way to counter-act the association, it simply is, yet there is no reason for it in any way.

Many trans advocates and their allies have spent years trying to affiliate opposition to trans ideology with actual violence, and they are using this killing to try to do so here on Twitter. The idea is that because Rowling has defended women, not inclusive of biological men, she has both committed actual violence and opened the door for others to commit real-world violence.

This is an entirely trash idea. Rowling defends women. She doesn't believe that women are men or that men are women. She is sure and steadfast in that belief, as are the many, many women with female bodies who can see and feel fully that they are different from male bodies.

There is no reason to think that Rowling had any part in this killing, that she is in any way culpable, or has any relationship to this crime. But Twitter wants users to associate Rowling, and gender critical women who stand up unequivocally for women's rights, with violence.

If trans activists can successfully make this link in people's minds, then the idea that violence against Rowling and women should be used to stop violence against trans identified biological males will not be far behind.

Speech is not violence, only violence is violence. Women like Rowling will not be intimidated away from speaking the truth.