City of Regina puts TRIGGER WARNING on statue of Sir John A. Macdonald—just in time for Canada Day

A statue of Sir John A. MacDonald in Regina's Victoria Park has become the subject of debate, prompting the City of Regina to place a plaque with a "trigger warning" on it. 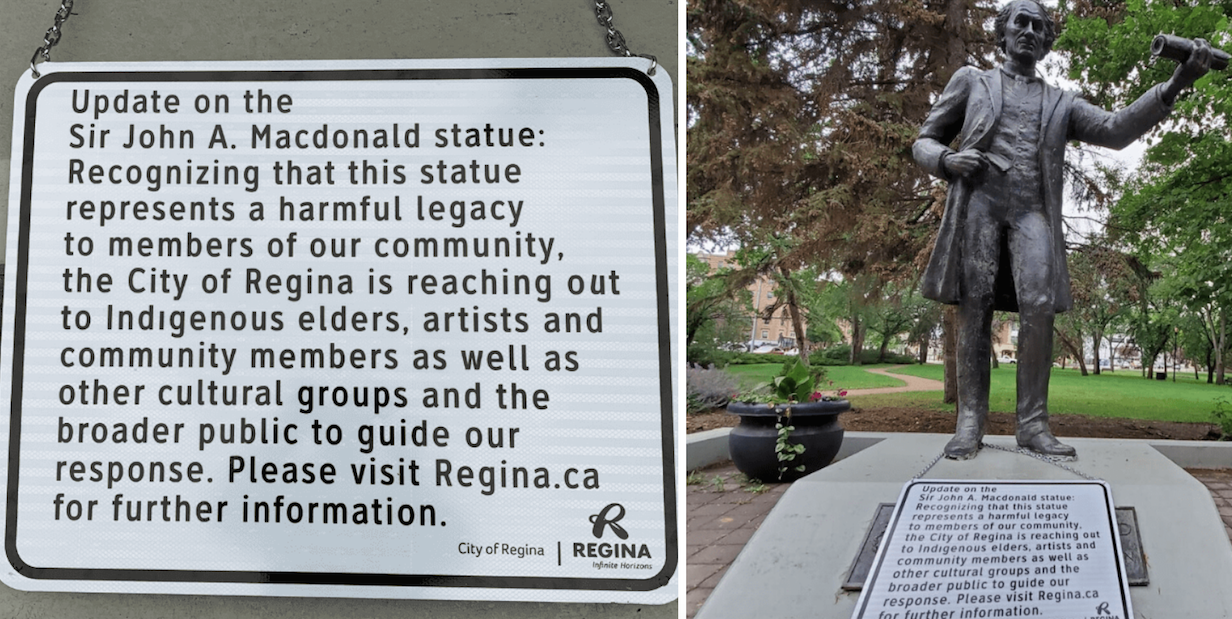 A statue of Sir John A. Macdonald in Regina's Victoria Park has become the subject of debate recently, prompting the City of Regina to collect the public's feedback on what to do next, according to the Winnipeg Sun.

So far, the City of Regina has hung a plaque at the bottom of the statue that is chained around Macdonald's feet with a "trigger warning" that acknowledges the controversial legacy of the country's first Prime Minister.

The message reads, “Recognizing that the Sir John A. Macdonald statue represents a harmful legacy to members of our community, the City of Regina is reaching out to Indigenous elders, artists, community members and other cultural groups. The City will seek guidance on responding to harmful legacies and increasing community understanding of Regina’s diverse histories. The general public will also have opportunity to be engaged,”

The City plans to consult with Indigenous elders, artists and community members along with other cultural groups on how they feel they should move forward as announced in a photo of the message and a tweet on the City of Regina's Twitter page.

A petition has been launched asking for the removal of the statue that has so far garnered about 2,500 signatures.

The statue has been vandalized several times over the past couple of years and was recently the site of a sit-in protest that was organized by Star Andreas and Kerry Bellegarde-Opoonechaw.

Those who oppose the statue believe that MacDonald's racist beliefs are a harmful presence in the park and they do not appreciate his legacy.

The Mayor of Regina, Michael Fougere, has stated that he would like the statue to stay, adding that he would be in favour of adding a plaque that would elaborate on the historical context and controversial role Macdonald played in founding the country.

“He did many good things, but he’s attached to some very unsavoury and nasty things that I think people should know about too,” said Fougere.

The city had previously begun consultations with Indigenous artists and elders earlier in the year but discussions were side tracked by the COVID-19 pandemic preventing group gatherings. The city is now reviewing the the statue once again and the result of that review could lead to the statue being removed.

Regina recently approved the Civic Art & Cultural Collections Policy, which was implemented to provide guidance regarding issues such as city-owned statues or monuments that may have harmful legacies and how to respond.

In the policy, options such as counter monuments and reinterpretation of the historic figure's significance have been suggested. This could include bringing a modern context to the statue via a plaque or addition. Or potentially, its removal altogether or replacement.