"[A] friend who is a literary agent told me that he cannot even get editors to read first novels by young white male writers," Joyce Carol Oates wrote. 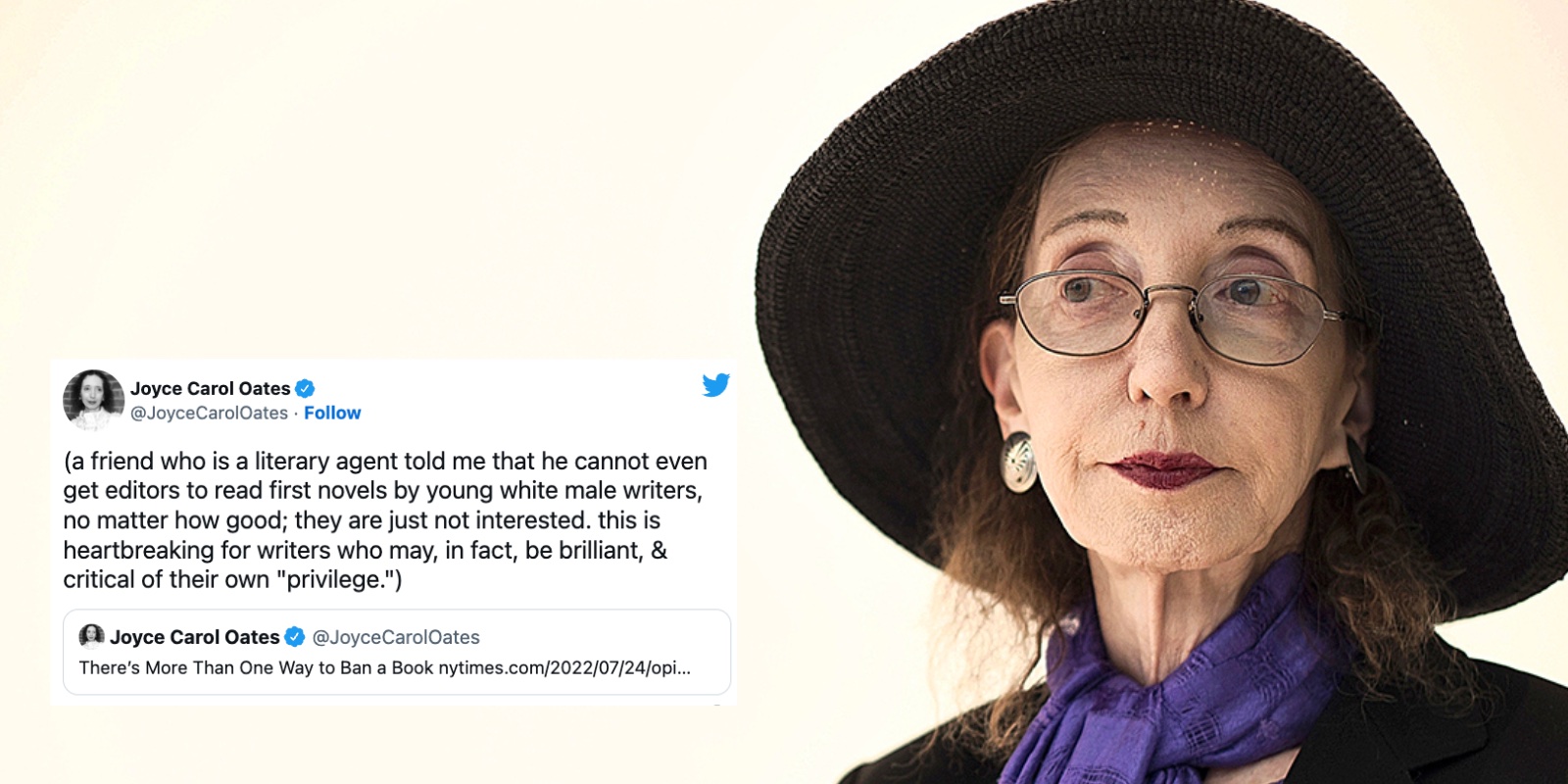 "[A] friend who is a literary agent told me that he cannot even get editors to read first novels by young white male writers," Oates wrote, "no matter how good; they are just not interested. this is heartbreaking for writers who may, in fact, be brilliant, & critical of their own 'privilege.'"

Oates stated that this was "heartbreaking" for those writers who buy into the ideology of white privilege, and who may even be "critical" of it, but it is just as hard a pill to swallow for those white male writers who are not burdened by the inherent detriments associated with their race and sex.

Speaking to The Post Millennial, comedian and actor Tyler Fischer said "I quit acting for three years, because that I was getting emails like that, just explicitly out front like, 'Hey, I probably shouldn't submit you because you're white, but you're right for the role.'"

This is not a new issue, though Oates, linking to a New York Times article, seems open to talking about it. The linked Times article is about the problems of self-censorship, which is "a subtler form of repression." Pamela Paul writes that this kind of censorship, which is not public but takes place "behind closed doors," is happening across the industry.

Projects, she said, are killed early in the publishing process. Before a book even has the chance to be controversial, literary agents or editors are "scuttling a project for ideological reasons before a deal is signed, or defusing or eliminating 'sensitive' material in the course of editing."

Those ideological reasons, Oates point out, are often based entirely on an author's race and sex. Some of this "scuttling" is the result of what are known as "sensitivity reads," where an authors work is first read by readers who are tasked with identifying anything that could be considered "offensive" in the work.

And there have been some notable selections over the years that have sparked controversy, walk-backs, and apologies. In many cases, these have come directly from authors issuing admissions of guilt for having been so offensive as to take pen to paper and write from their own perspective on the world.

In a notable instance from 2019, an Asian young adult author was mobbed by a heap of critics who hadn't read the book, and pulled her book prior to publication.

"Amelie Wen Zhao, by writing a book about her own experience, problems within her country, and a fictional princess trying to solve her father's murder," I wrote in 2019, "in a story designed for young adult audiences, made grown a** adults on twitter, many of whom hadn't read the book, feel unsafe.

"One tweet that really stands out reads '... racist a** writers, like Amélie Wen Zhao, who literally take Black narratives and force it into Russia when that shit NEVER happened in history—you're going to be held accountable. Period.' It stands out because Zhao didn't do that at all, not even a little bit, and I say that as someone who also didn't read the book."

In the 2020 case of Jeanine Cummins' American Dirt, a novel about mother and son refugees from a violent Mexican drug cartel, a New York Times book reviewer first took issue with herself for having enjoyed the book, and then said that the author should not have written it.

Critics of American Dirt prided themselves on not reading the book before giving it bad reviews.

Another author claimed, after his book was published, that it was racist and demanded that the book be pulled from shelves. He said drawings of an Asian character were "Orientalist," and could not tolerate the shame of his own work.

Paul, for the Times, gives some credence to the publishing world's unwillingness to saunter into controversial waters. No one wants to get mobbed, shamed, banned or called names simply for having loved a book and shared that love with others. Musician Winston Marshall can attest to that phenomenon when he was essentially bullied out of his band Mumford and Sons for having expressed an interest in Andy Ngo's book Unmasked.

"You can understand why the publishing world gets nervous. Consider what has happened to books that have gotten on the wrong side of illiberal scolds," Paul writes.

While it may appear to make sense in our absurdist contemporary cultural space, the problem of self-censorship, or limiting yourself before the official censors or the social scolds have a chance, it is not a new phenomenon, or problem for self-expression.

After the Seuss estate cancelled a bunch of their own author's books following a study called "The Cat is Out of the Bag: Orientalism, Anti-Blackness, and White Supremacy in Dr. Seuss's Children's Books," CNN pundit Jake Tapper said that this was totally fine because the estate had made their decision on their own free will.

But Russian author Leo Tolstoy had already addressed the problem of self-censorship more than a hundred years prior. He wrote about the censorship process for his work "What is Art?"

At each step of the way, he was encouraged by the norms of the day to censor bits and pieces, until, he writes, "...expressions crept into the book which altered the sense and attributed things to me that I could not have wished to say. So that by the time the book was printed it had been deprived of some part of its integrity and sincerity."

Paul concludes her article by saying that "We shouldn’t capitulate to any repressive forces, no matter where they emanate from on the political spectrum," and she is right.

The problem, however, of self-censorship, of censorship from institutions, and from those seeking to remake the literary and cultural landscape to be more in keeping with their own ideas of social justice is far from beginning, it is in full swing. And we are in a moment where it will take more than a few well-placed columns in the Times, or notes from notable authors on Twitter to fix it.

The literary and cultural spaces and organizations need to be remade to have, at their foundations, a drive for free speech and for good work above all else, where an author is not judged by their sex or race, but on the merits of the work alone.