"He supports murdering babies up to the day of birth, genital mutilation of children, funneling billions of taxpayer’s dollars for a proxy war with nuclear Russia, and the cartel’s drug & human trafficking business at our border." 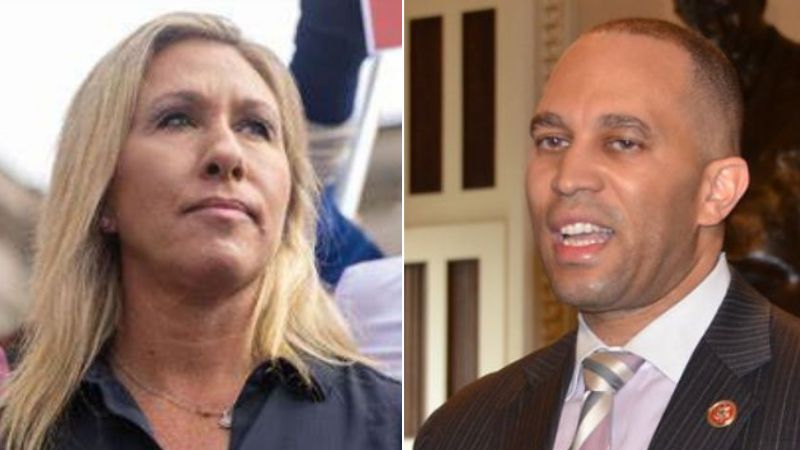 Georgia Congresswoman Marjorie Taylor Greene slammed New York Representative, and election denier, Hakeem Jeffries after he said she was an example of "extremism" in the Republican party.

"Hakeem Jeffries calls me extreme?" Taylor Greene tweeted. "He supports murdering babies up to the day of birth, genital mutilation of children, funneling billions of taxpayer’s dollars for a proxy war with nuclear Russia, and the cartel’s drug & human trafficking business at our border. He’s extreme."


In November, Jeffries announced that he intends to replace Speaker Nancy Pelosi as the leader of the congressional Democrats.

Jeffries appeared on ABC's This Week on Sunday and spoke with host George Stephanopoulos about who will take on the leadership role in the House once the GOP takes over in the next session.

"Are they going to double and triple down on the extremism that we've seen from people like Marjorie Taylor Greene? That would be unfortunate," Jeffries said. "And if that happened, then there's not going to be real, meaningful cooperation."

As the organization Pro Life America noted, his voting track record substantiates a support of abortion without restriction and up to the moment of birth, as Taylor Greene said.

According to LGBTQNation, Jeffries is an "ally" and has sought to "expand LGBTQ rights" through legislation that included adopting gender-neutral language in the halls of congress as well as gender neutral bathrooms. He expressed opposition to Florida's parental rights law that prevented the indoctrination of youth with the precepts of radical gender ideology.

Concerning Biden's border crisis, Jeffries denies that it is a problem.

Jason Rantz wrote, "Today, Rep Hakeem Jeffries (D-NY) said Democrats "govern responsibly" on border security and immigration. He claimed that the Republican "rhetoric" on this topic "has no basis in reality."


He is also a firm supporter of US involvement in the war in Ukraine.

The US has sent over $60 billion to Ukraine to aid in their ongoing war with their Russian invaders since February.
ADVERTISEMENT
ADVERTISEMENT
MTGvHakeem