Cartels posted a video on Wednesday that showed a large semi-trailer truck with overlaid words that read, "Need someone who can drive an 18 wheeler right now mcallen to houston already ready $70k." 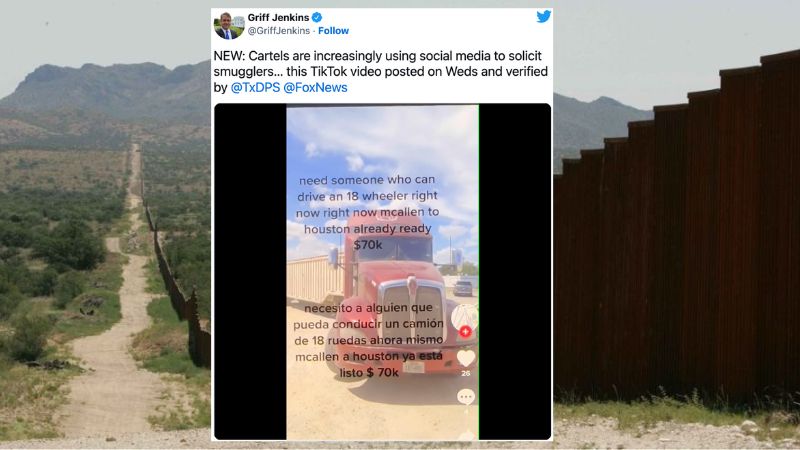 Joshua Young Youngsville North Carolina
Oct 7, 2022 minute read
ADVERTISEMENT
ADVERTISEMENT
Mexican cartels have been expanding their use of social media in order to recruit potential smugglers into their operation, as they often pack drugs along with illegal immigrants who are flooding America's southern border.

Fox News reports that the cartels posted a video on Wednesday that showed a large semi-trailer truck with overlaid words that read, "Need someone who can drive an 18 wheeler right now mcallen to houston already ready $70k."

The Texas Department of Public Safety verified the video as authentic.

"That is why we are experiencing an increase in human smuggling events along the border," said Texas DPS spokesman Christopher Olivarez. "Many individuals from larger metropolitan areas such as Austin, Houston, Dallas, San Antonio, and even out of state are being recruited as drivers through social media platforms to smuggle illegal immigrants."

The cartels are exploiting Biden's Border Crisis which has seen over 2.1 million border crossers pour into the US in the 2022 fiscal year alone. That figure accounts for encounters with Border Agents and there are another estimated 600,000 others who made it into the US and simply got away.

On Thursday, 84 illegal immigrants were found packed into a truck like the one in the cartel video in Hidalgo County, 12 miles from the border.

GOP members of the House Homeland Security Committee addressed TikTok and said, "It appears that via your platform cartel members are openly glorifying and normalizing illegal behavior and violence to recruit new members, most recently American teenagers."

Facebook and it's family of apps, Instagram and Whatsapp, were heavily used to coordinate smuggling operations during the Haitian immigrant crisis in 2021.

As The Post Millennial reported, Facebook has a history of use and exploitation in smuggling, especially human smuggling. In 2019 the BBC did a report on how human traffickers in the Middle East were using facebook for their efforts. Apple threatened to remove the app from their devices because the use was so common. The apps still allow users to exchange information about crossing borders under any circumstances, including illegally.

Facebook has cracked down and has said they bar and shared information that aids in human trafficking.
ADVERTISEMENT
ADVERTISEMENT
CartelsTruck