Christopher Rufo tweeted two pages from the book which show a diagram of a naked man along with tips on how to pleasure him sexually as well as an accompanying page titled Doing the Sex which contains descriptions about what makes a good "handie," a bad "handie," and how to perform oral sex. 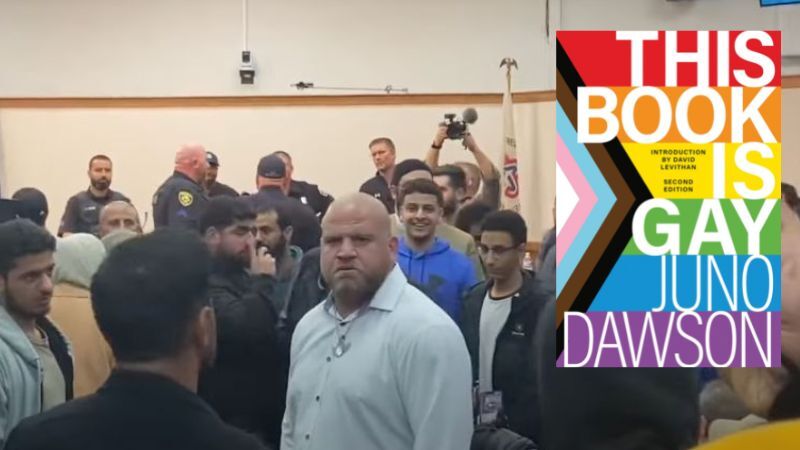 The pornographic content of This Book is Gay, the controversial book by Juno Dawson which sparked the heated parent protest at a Michigan school board meeting earlier this week, has been shared on social media.

Christopher Rufo tweeted two pages from the book which show a diagram of a naked man along with tips on how to pleasure him sexually, as well as an accompanying page titled Doing the Sex which contains descriptions about what makes a good “handie,” a bad “handie,” and how to perform oral sex.

There were chaotic scenes at Monday’s school board meeting when members of Dearborn’s Muslim community showed up to protest the sexually explicit material available in school libraries.

Rufo quoted just some of the explicit parts of the book available to school-age children.

“It's not "anti-LGBTQ" or a "book ban" to say that this material is not appropriate for an elementary school classroom,” Rufo went on to say. “Parents have the right to tell their local schools that they do not want their kids exposed to graphic sex materials—whatever the orientation.”

He also called the public school system a “government-run monopoly that has compulsory power over children.”

The parents in Dearborn, Michigan aren’t the only parents outraged by this book's availability in their children’s schools. Last week Christy Wade, a North Carolina mother and member of the parental rights group Moms for Liberty, gave a powerful speech at a Charlotte-Mecklenberg school board meeting in which she read excerpts from the same book.

In her speech, Wade said the book was found in a seventh-grade classroom at Collingswood Middle School as well as on the ELA recommended reading list for seventh graders at Jay M. Robinson school.

This Book is Gay has been controversial since its publication in 2015 when a mother in Wasilla, Alaska complained to her local library after her 10-year-old son pulled the appealing rainbow-colored book off the juvenile nonfiction shelf, local news reported at the time.

Interestingly, the author, Juno Dawson, no longer identifies as a gay man. Shortly after the book’s publication in 2015, Dawson announced a transgender identity and later sparked outrage amongst the gay community for saying that “a lot of gay men are gay men as a consolation prize because they couldn’t be women” in an interview with Attitude Magazine.

“I just wanted to get f*cked like a woman,” said Dawson, the author whose 2015 work is being provided as an instruction manual telling high school boys how to have gay sex. “That's what it's about. It's not about what hole it's going in.”