Dearborn Public Schools is Michigan's third-largest district, and its Muslim community are protesting books such as "This Book is Gay," a text which includes explicit descriptions of sex acts and a glossary of sex slang. 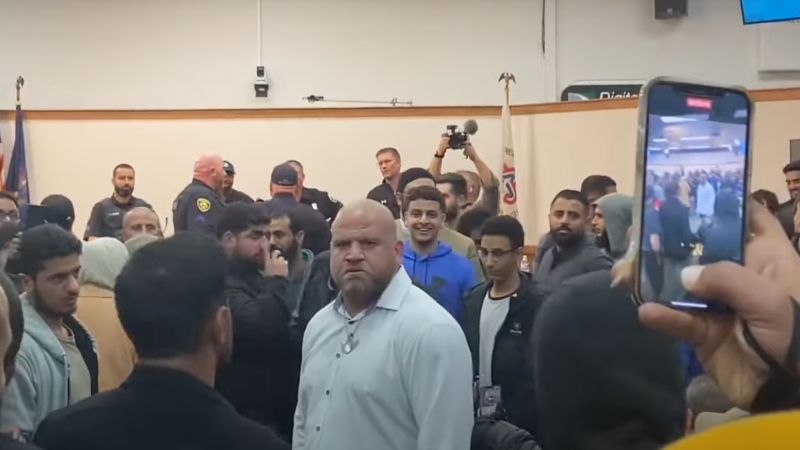 A Dearborn, Michigan school board meeting had to end early on Monday night after vocal protest by the city's Muslim community over the inclusion of LGBTQ+ books in the district's libraries and curriculum.

According to the Detroit Free Press, "A heavy police presence failed to prevent the Monday night meeting from descending into chaos," as counter protestors from the American Federation of Teachers clashed with and confronted the Muslim community over what was being taught to their children.


The Post Millennial Editor-at-Large Andy Ngo posted video of the uproar on Twitter and wrote, "On Monday, a Dearborn Public Schools board meeting in Michigan was shut down as hundreds of Muslims protested the use of LGBTQ books. They held up signs in Arabic & English referencing they are in the majority & that homosexuality is sin."


Dearborn Public Schools is Michigan's third-largest district, and its Muslim community are protesting books such as "This Book is Gay," a text which includes explicit descriptions of sex acts and a glossary of sex slang.

One protestor, Hassan Aoun, shouted  "We’re going to send a message to the board of education. We the people … put you in this position We put you on the chair. We elected you."

Shouts of "Vote them out!" can be heard in the video, with the chants being led by Aoun.

According to Axios, veteran and businessman Steven Elliot, the Republican challenging Rashida Tlaib for Congress, and Michigan GOP co-chair Meshawn Maddock expressed support for the Muslim community. Tudor Dixon, the GOP's gubernatorial candidate, said, "Schools need to stop teaching radical sex and gender theories behind parents' backs and instead get back to the basics of teaching reading, writing and math."

The Muslim activists at Dearborn share similarities with parents' rights groups across the country who are protesting the indoctrination of children into radical gender ideology through books like "This Book is Gay."

"CAIR, the largest Muslim organization in the US, expressed support for the Muslim anti-gay protesters. Dearborn has a very high Muslim population that is celebrated by left-wing ideologues & Democrats. They’ve been careful to not criticize the Muslims who oppose the LGBTQ books," wrote Ngo on Twitter.


Members of CAIR's Michigan chapter passed out flyers at the school board meeting informing parents of their rights, especially around keeping sexually explicit material away from their kids. The Executive Director of that chapter, Dawud Walid, said, "Such information about parents and students' rights has been given to community members by CAIR-MI prior to the book controversy."

Those early efforts yielded results as the district created guidelines last week that allows parents to block certain books from their children's ability to check them out at the school library.

"Parents are fed up — and in Dearborn they aren't allowing this nonsense to go on any longer," said the founder and organizer of the annual Ramadan Suhoor Festival, Hassan Chami.

The meeting started off peacefully but escalated as parents started to get cut off from speaking due to time limits.

The school board's chair, Roxanne McDonald, said "Let's all be civil and respectful," to the crowd which some said was condescending.

The meeting was eventually shut down citing a fire hazard due to capacity.

Another meeting is scheduled for Thursday night at 7 pm.