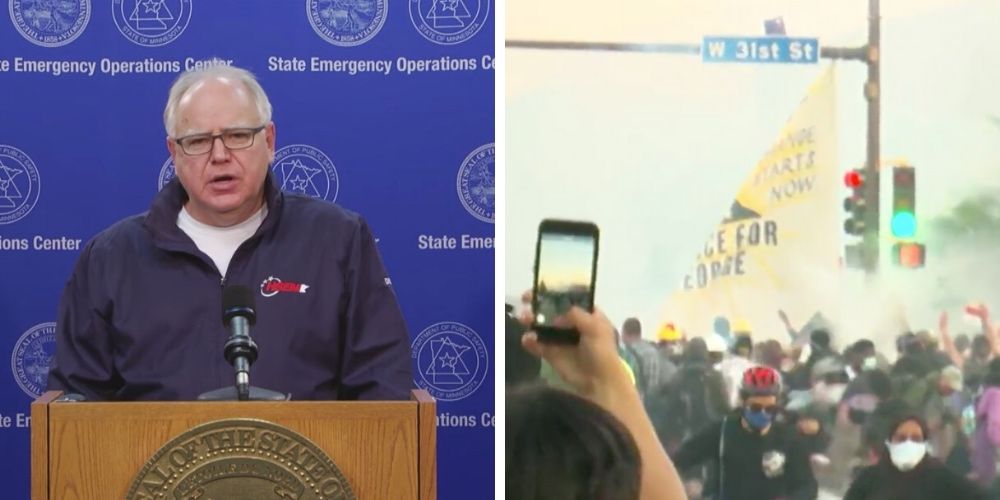 Minneapolis Mayor Jacob Frey said Saturday that Minnesota officials believe "white supremacists" and "out-of-state instigators" could possibly be behind the riots that broke out after George Floyd's death, but a recent report revealed that "about 86 percent" of arrests so far have been of those who are residents of the state.

But Minnesota Governor Tim Walz doubled down, saying that the majority of the rioters who were arrested were not from Minneapolis, and simply decided to take advantage of the chaos, according to Fox News.

A report by KARE 11 showed how "about 86 percent" of the 36 arrests had addresses listed in Minnesota, and that they live in Minneapolis or the metro area. There were five out-of-state arrests that came from Illinois, Florida, Michigan, Arkansas, and Missouri, according to KARE 11.

Fox news reportedly reached out to the mayor's office to ask about the discrepancy between what is being said about out-of-state rioters and the data that was actually found on the issue, but the only response they received was that they "will look into it."

"We are now confronting white supremacists, members of organized crime, out of state instigators, and possibly even foreign actors to destroy and destabilize our city and our region," Frey tweeted out on Saturday.

"I think our best estimate of what we heard are about 20 percent are Minnesotans, and 80 percent are outside," Walz said at a news conference on Saturday.

But Walz and Frey are not the only officials in Minnesota who are attempting to shift the blame from antifa and other far-left groups to white supremacists.

John Harrington, Minnesota's Commisioner of Public Safety, also said in a news conference that white supremacists were part of the chaos that saw buildings burned down in Minneapolis.

But there is no data to support the claim that there are mobs of white supremacists taking part in these riots. Antifa and other far-left groups have been captured on video dozens of times, having spray-painted their symbol on the side of buildings.

Some are even going so far as to say that the KKK are raping and lynching people in Minneapolis, which is completely unfounded.

In a tweet posted Saturday, Minnesota Attorney General Keith Ellison is seen holding a copy of Antifa, the Anti-Fascist Handbook.

Officials have come under pressure in the past few days to address the violent riots and destructive behavior of those who believe burning buildings, businesses, and people's homes is a productive way to respond to someone's unjust death.

President Trump took to Twitter on Saturday, telling Frey to "get tough and fight" after the mayor and Walz finally decided to activate the Minnesota National Guard.

Walz said he had authorized the "full mobilization" of 2,500 guardsmen, adding that this was "an action that has never been taken in the 164-year history of the Minnesota National  Guard."

"Our great cities of Minneapolis and St. Paul are under assault by people who do not share our values, who do not value life and the work that went into this and are certainly not here to honor George Floyd," Walz said.

Attorney General Bill Barr urged the rioters to discontinue the violence so that the peaceful protesters could be heard.

"Unfortunately, with the rioting that is occurring in many of our cities around the country, the voices of peaceful protest are being hijacked by violent radical elements," Barr said in a statement on Saturday.

"Groups of outside radicals and agitators are exploiting the situation to pursue their own separate and violent agenda."

President Trump has said the military is readily available.

"We have our military ready, willing and able, if they ever want to call our military. We can have troops on the ground very quickly," Trump said. "They’re using their National Guard right now, as you know."

The US military is not allowed to act as law enforcement on US citizens, but under the Insurrection Act  of 1807, state officials may call upon the military to put down a rebellion.