There were 325 murders in 2021, an increase of 5.9 percent since 2020, the highest number of murders recorded since the Washington Association of Sheriffs and Police Chiefs (WASPC) began collecting data in 1980. 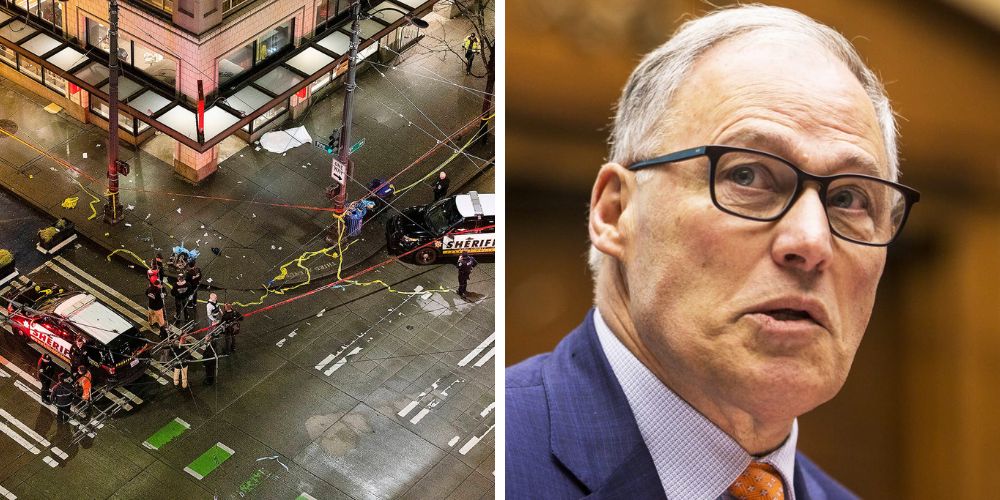 Last week the Crime in Washington 2021 report was released and showed violent crimes and murders increased throughout the Democratic-controlled state as residents beg elected officials to address soaring crime.

The report compiled data from 232 state, county, municipal and tribal agencies and stated there were 325 murders in 2021, an increase of 5.9 percent since 2020, the highest number of murders recorded since the Washington Association of Sheriffs and Police Chiefs (WASPC) began collecting data in 1980.

Drug arrests fell 73.6 percent and drug offenses dropped 60.9 percent. However, many attributed that to municipalities including King County where Seattle is located, effectively legalizing the offenses by no longer enforcing lower-level drug offenses.

Against the backdrop of spiking crime, the number of commissioned officers in Washington state in 2021 was 10,736, a net loss of 495 from 2020, according to the report, compared to 11,231 in 2020, which represents an overall 4.4 percent statewide reduction in staffing.

Many law enforcement agencies across the state are grappling with a staffing crisis following the defunding movement, which was embraced by many local officials. Democrat Governor Jay Inslee’s COVID vaccine mandates for state employees, which were replicated by many counties and cities in the state, led to the termination of even more officers.

The shortage of officers has had a massive impact on response times even in the face of the rising number of murders, which are at an all-time high, and violent crime being tracked up more than 12 percent.

According to the data, Washington reported an all-time high of 325 murders, up 5.9 percent, 592 hate crimes were reported, a 26 percent jump, and crimes against people jumped 4.1 percent from the previous year.

Steven Strachan, executive director of the Washington Association of Sheriffs and Police Chiefs, noted that crimes may be under-reported, telling KOMO News, "It is also part of making sure the community feels comfortable in reporting those crimes to law enforcement. Part of the issue with hate crimes is the ability and the comfort level of reporting, so we will continue to focus on that."

Lack of reporting and witnesses also means fewer cases are closed. Complicating matters is that detectives are being sent back on the streets as patrol cops to deal with the staffing shortage. Jim Fuda, director of Crime Stoppers of Puget Sound told KOMO, "Even with SPD (Seattle Police Department), some of the major crimes units is some of those guys are going back and having to put a uniform on. They have to put more people out on the street, which means those caseloads sit."

The Seattle Police Department’s crime dashboard showed gun violence in the Capitol Hill neighborhood, the site of the former "autonomous zone," has more than tripled in the first half of 2022 compared to the same time last year. Tacoma is seeing a similar trend.

There was also a 27.3 percent increase in motor vehicle thefts in 2021, and the theft of motor vehicle parts increased 100 percent.

Inslee addressed the report during a news conference last Wednesday boasting, "I’ve increased the pay for state troopers, the legislature significantly increased the pension stability for the system so people will be secure. We took action last year to train more officers so we could hire more officers at the criminal justice system."

However, to many Washingtonians, Inslee’s words were deemed "too little too late."

During the riots in Seattle in 2020 following the death of George Floyd, rioters burned police cars and stole rifles from the vehicles. Inslee delayed sending in the National Guard until the riots were mostly finished downtown, and when he did send them, Guardsmen were sent unarmed.

Inslee did not send in the Guard to stop subsequent riots nor to break up the Capitol Hill Autonomous Zone, an armed occupation of 6 blocks of Seattle by Antifa and BLM activists following Seattle officials ordering a police precinct to be abandoned to the rioters. The occupation lasted almost a month. Rapes, robberies, and murders in the zone soared 250 percent.

During the occupation, the Washington State Patrol was instructed to close the I-5 freeway so that anti-police protestors could march across nightly. The practice finally ended after a car broke the barricade and drove into the demonstrators, killing one and severely injuring another.

Following the 2021 legislative session, Inslee signed legislation passed by the Democrats in the State House which limited police actions. Many have cited the legislation as a cause for the spiking crime.