"The perpetrator in this violent crime against Paul Pelosi," Carlson revealed, "is a mentally ill, drug addicted, illegal alien nudist, who takes hallucinogens and lives in a hippie school bus in Berkeley with a BLM banner and a pride flag out front." 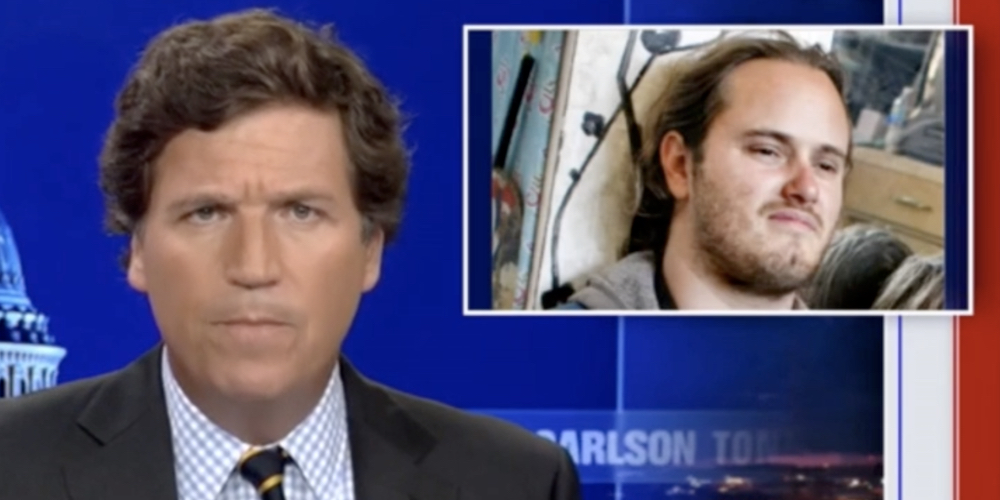 On Monday night's episode of his show on FOX News, Tucker Carlson dove into the life of David Depape, the man who allegedly attacked House Speaker Nancy Pelosi's husband, Paul.

Carlson revealed that Depape was not only mentally unstable, but also an illegal alien living in a bus.

"Who exactly is David Depape?" Carlson asked, lamenting the fact that much of the mainstream media has been "uninterested" in delving into his backstory, leaving it to independent reporters such as Michael Shellenberger to fill in the gaps.

"Shellenberger first did the obvious and went to where Depape was living, across the bay in Berkeley," Carlson continued, revealing that the attacker had been "camping full-time in dilapidated Ken Kesey-style school bus complete with a gay pride flag out front and a sign that reads 'Berkeley stands against hate,'" A BLM banner was also located on the property.

"Politically this picture could not be clearer," Carlson said. "You know where this guy stands."

He went on to explain that Shellenberger's reporting had revealed that Depape was well known in the area as a "hallucinogenic drug enthusiast and a semi-professional nudist."

Depape was also described by those he hung out with, including his ex-girlfriend, as "completely deranged," and "a broken child in an adult body with serious mental problems."

"So just another mentally ill drug addict with a fondness for BLM; that's not quite so unusual in San Francisco," Carlson added, noting that on top of all this Depape was also an illegal alien.

Depape, originally from Canada had "long overstayed his visa," and was thus in the US illegally at the time of the attack.

"So to restate," Carlson said, "the perpetrator in this violent crime against Paul Pelosi is a mentally ill, drug addicted, illegal alien nudist, who takes hallucinogens and lives in a hippie school bus in Berkeley with a BLM banner and a pride flag out front."

"What does this sound like to you?" Carlson asked, noting that, "if you guessed this is obviously a textbook case of homegrown right-wing extremism, well then obviously you've been watching a lot of cable news today."

He went on to slam the media for their portrayal of Depape as "a member of Donald Trump's QAnon army," and for suggesting that the right's criticism of Pelosi had somehow led to the attack.

Depape was arrested and charged with attempted kidnapping and assaulting a relative of a federal official, and is currently being held without bail.