Pelosi echoed President Joe Biden's Thursday remarks where he categorized half the US population as "a threat to this country" and "extremists" who must be defeated. 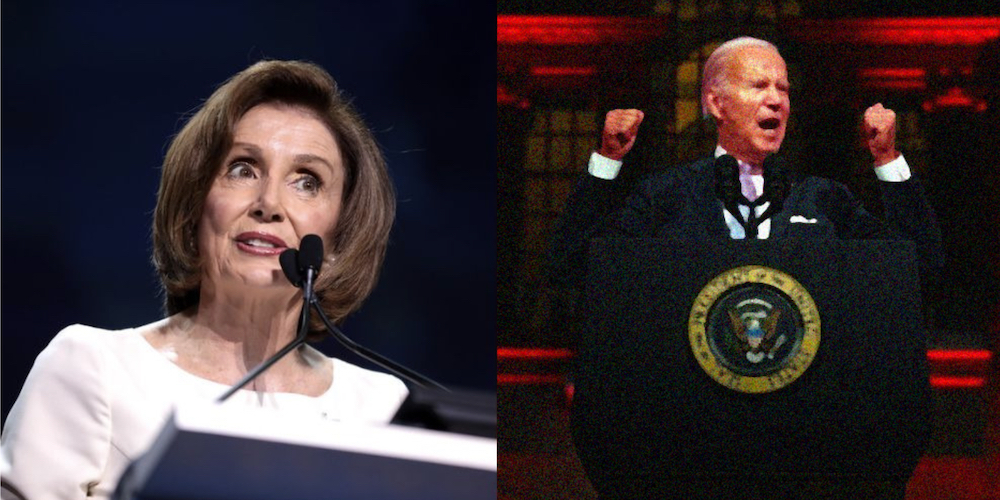 "Inspiring and optimistic" was how House Speaker Nancy Pelosi described President Joe Biden's Thursday remarks where he categorized half of US voters as "a threat to this country" and "extremists" who must be defeated.

From press release, Pelosi echoed Biden's Thursday sentiment and said Biden, "in his inspiring and optimistic remarks tonight, made crystal clear that our rights, our freedom and our Democracy are on the line. Every American who cares about the integrity of our Democracy, the fairness of our economy, the safety of our communities and the health of our planet is grateful to the President for his values-based vision and patriotic leadership."

Biden's "patriotic leadership" included saying "MAGA Republicans have made their choice. They embrace anger. They thrive on chaos. They live not in the light of truth but in the shadow of lies."

Speaking from Independence Hall in Philadelphia Thursday night, Biden said, "as I stand here tonight, equality and democracy are under assault" and placed the blame solely on his political opposition and their constituents.

"Donald Trump and the MAGA Republicans represent an extremism that threatens the very foundations of our Republic," Biden said in his dark remarks.

"In the Congress and across the country, extreme MAGA Republicans are orchestrating a sinister campaign," Pelosi said in her statement. "From criminalizing women's health care to ending Social Security and Medicare to undermining our elections, the GOP is working to turn back the clock on many of our most fundamental liberties while fanning the flames of violence and division."

"There’s no question that the Republican Party today is dominated, driven, and intimidated by Donald Trump and the MAGA Republicans," Biden said against a blood red backdrop.

A week prior to Biden's "battle for the soul of the nation" speech he proclaimed that conservatives and Trump supporters are semi-fascist while speaking to Democrats in Pennsylvania.

White House Press Secretary Karine Jean-Pierre then defended the comments and said "We have seen MAGA republicans take away our rights, make threats of violence."