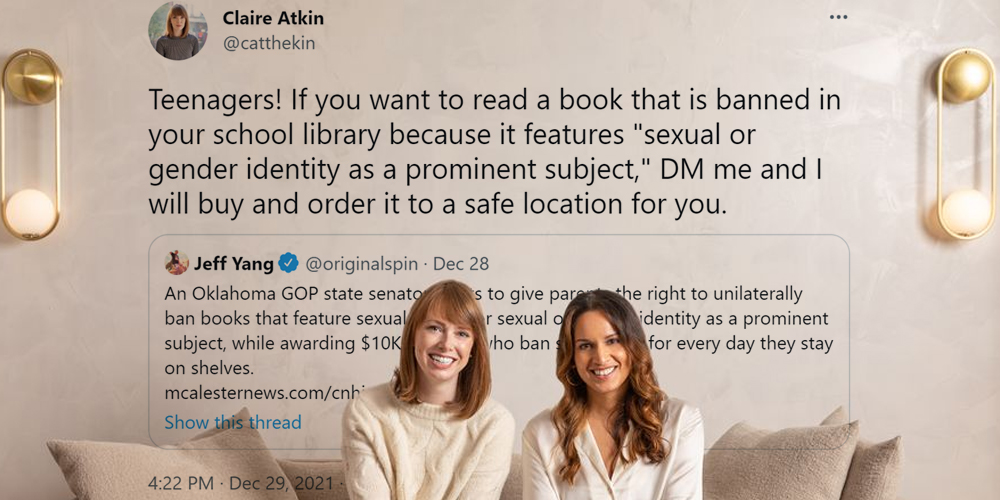 Nandini Jammi formerly of the Sleeping Giants has engaged on an advertisement deplatforming blitz, including targeting The Post Millennial.

But now Jammi runs  "Check my Ads" with Claire Atkin. In doing so, she has assigned herself to the same caliber of controversial activities she accuses other outlets of being provocative about.

Some controversies are more equal than others, according to Atkin and Jammi.

"Teenagers! If you want to read a book that is banned in your school library because it features 'sexual or gender identity as a prominent subject,' DM me and I will buy and order it to a safe location for you."

The tweet that Claire Atkin was responding to was from a CNN Opinion columnist who highlighted the severity of the controversy surrounding parental desires to get sexually themed materials off the shelves of their school libraries. This as Senate Bill 1142 in Oklahoma proposed by Rob Standridge would give parents autonomy to request such material be removed within 30 days, lest the school face a $10,000 fine daily if they didn’t comply.

It hits at the point made by Nikole Hannah-Jones of the "1619 Project" made days ago. She asserted that teachers know better than parents when it comes to what to offer in terms of their education.

Recent examples of this going wrong included a DC educator who forced third-graders to re-enact the Holocaust in a classroom setting. The controversial move cost the person in question their job.

That hasn’t stopped at least one Texas teacher from claiming she knew better than parents who objected to sexually-explicit material being offered to minors.

It’s unknown at this time why Claire Atkin believes her approach is friendly from a marketing standpoint.

A recent public challenge by Joy-Ann Reid of MSNBC dared the general public to name these "so-called" controversial books in question. As if to assert they didn’t exist.

A commenter responded with specific titles, as they "named a numbssssssssssssssser of books including Jack of Hearts (and Other Parts), Gender Queer (illustrated), All Boys Aren’t Blue, and Tricks," according to The Daily Wire.

But Reid has since been left speechless. Has the network's method worked? Not according to the ratings for MSNBC and CNN, which are both dwarfed by Fox News.

In other recent reports, Nandini Jammi has been seen arguing for milder punishments for convicted sex offenders.

In a write-up for the National Crime Prevention Council, where she interned, Nandini complained about the “Eternal Sentence for Juvenile Sex Offenders, “remarking that “Of course, juvenile sex offenders aren’t toddlers, and they generally know what they are doing is wrong. However, a number of things should be considered before we give them a de facto life sentence by listing them on the Internet along with violent, knowing, and malicious adults.”

Nandini is referring to rapists and people who commit sexual assault.