US Navy in shambles as leaders prioritize wokeness over combat readiness: report

"[W]here someone puts their time shows what their priorities are. And we've got so many messages about X, Y, Z appreciation month, or sexual assault prevention, or you name it. We don't even have close to that same level of emphasis on actual warfighting." 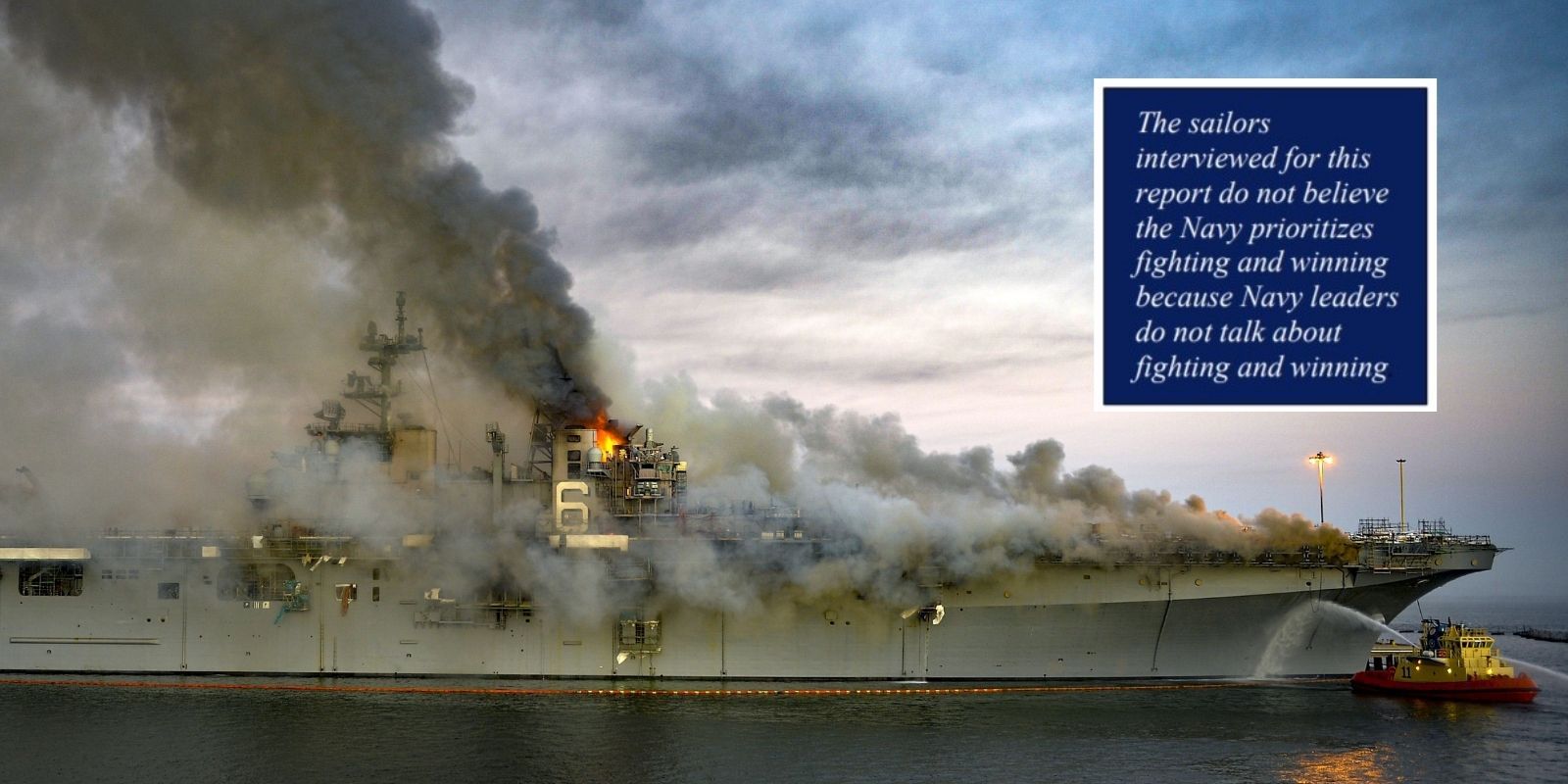 A scathing report commissioned by congressional members has found that the United States Navy is in disarray and focusing more on diversity than warfighting.

The official findings, considered a nonpartisan exercise of congressional oversight, discovered that the Navy's surface warfare forces have systemic training and leadership issues, including an intense focus on diversity that eclipses basic readiness skills. The authors of the review conducted long-form interviews with 77 active-duty, retired or detached officers, and enlisted personnel about insights into the culture of the United States Navy following a series of high-profile and damaging operational failures in the Navy's surface warfare community.

A staggering 94 percent of the subjects believed the recent Naval disasters were part of a broader, internal problem. "I guarantee you every unit in the Navy is up to speed on their diversity training. I'm sorry that I can't say the same of their ship handling training," said one retired senior enlisted leader. Other interviewed participants also voiced concern that the Navy spends more time on diversity training than on developing warfighting capacity and key operational skills.

"Sometimes I think we care more about whether we have enough diversity officers than if we'll survive a fight with the Chinese navy," lamented one active duty lieutenant. "It's criminal. They think my only value is as a black woman. But you cut our ship open with a missile and we'll all bleed the same color," she added.

One recent destroyer captain noted that "where someone puts their time shows what their priorities are. And we've got so many messages about X, Y, Z appreciation month, or sexual assault prevention, or you name it. We don't even have close to that same level of emphasis on actual warfighting."

Some of the interviewed respondents expressed worry that combat lethality and warfighting preparation are treated in a box-checking manner that can seem indistinguishable from non-combat related exercises.

One junior surface warfare officer, still on active duty, confessed: "I don't think that the [surface community] see themselves as people who are engaged in a fight."

Through exercise of Congress's Title I oversight authority, interviewees were offered anonymity to identify issues and engage in candid conversations that personnel wouldn't feel comfortable raising or entertaining inside the chain of command—to encourage nuance and candor as opposed to wider-reach, lower-touch survey methods that are common in military climate assessments.

The report prepared by Marine Lieutenant General Robert Schmidle and Rear Admiral Mark Montgomery, both retired, and conducted under the direction of Sen. Tom Cotton (R-AR), Reps. Jim Banks (R-IN), Dan Crenshaw (R-TX), and Mike Gallagher (R-WI) came in response to recent Naval disasters, including the burning of the USS Bonhomme Richard in San Diego, two collisions involving Navy ships in the Pacific, and the surrender of two small craft to the Iranian Revolutionary Guard Corps Navy in the Arabian Gulf.

"We gave ensigns boxes of CDs and told them to train themselves between watches, and that was a colossal failure," one officer recalled.

Another issue identified in the report is a perceived fear among Navy leaders of any negative news articles. "[Admirals] are supposed to lead us into battle but they hide in foxholes at the first sight of Military.com and the Military Times," said one intelligence officer. "The reporters are in charge, not us." Military.com has since released its own take on the findings, titling its recent article: "Featuring Catchy Quotes and Contentious Politics, a New Report Reveals Age-Old Navy Problems."

Interviewees described an undercurrent of fear that gripped the surface fleet while commanders are unwilling to delegate and senior ranks are quick to hand down punishments in response to media pressure. The report noted that the rank-and-file felt that the disciplinary actions following the two collisions involving the USS McCain and USS Fitzgerald were in response to "public and Congressional outcry rather than the concrete root causes of both unique incidents."

The report argued that Navy leaders placed too much emphasis on controversies that would otherwise disappear from the news cycle: "Many news outlets, including defense news outlets, have shifted to tabloid models where stories are sensationalized and short-lived. The Navy has forgotten how to differentiate between stories that are ignorable and stories that demand corrective measures."

No single president, member of Congress, or high-ranking naval leader was found to be solely responsible for the surface Navy's drift, the report underscored. Rather, slow and profound changes beginning with the dissolution of the Soviet Union and the end of the Cold War have eroded the Navy's combat edge as the outlined problems have metastasized over the past three decades.

The report concluded that a major peer-level conflict in the 21st century will play out in the naval theaters of operations. Unlike the surface Navy's last major war, which concluded 76 years ago, such imminent conflict will "not permit significant time for organizational learning once it is underway," the report predicted. "Unless changes are made, the Navy risks losing the next major conflict."

Cotton called the findings "very concerning" and said that American sailors are "too often deprived of the training and leadership they need to fight and win at sea." A Navy that puts "lethality, warfighting, and operational excellence at the heart of its culture is absolutely essential to our national security," Cotton stated.

"America counts on the Navy to keep us safe and keep our seas open," Cotton added via Monday's press release, vowing to work with the veterans who composed the report to implement the review's multiple recommendations.

Crenshaw, a former Navy SEAL officer, declared that the findings indicate that the nation's sailors are not receiving the necessary training to perform the essential functions of the Navy: "to find and sink enemy fleets and ensure freedom of navigation." He committed to collaborating with Navy leadership to implement changes to ensure that sailors are "war-ready and capable of defending" America.