NBC was so concerned about this they asked Twitter to censor Greg Price. 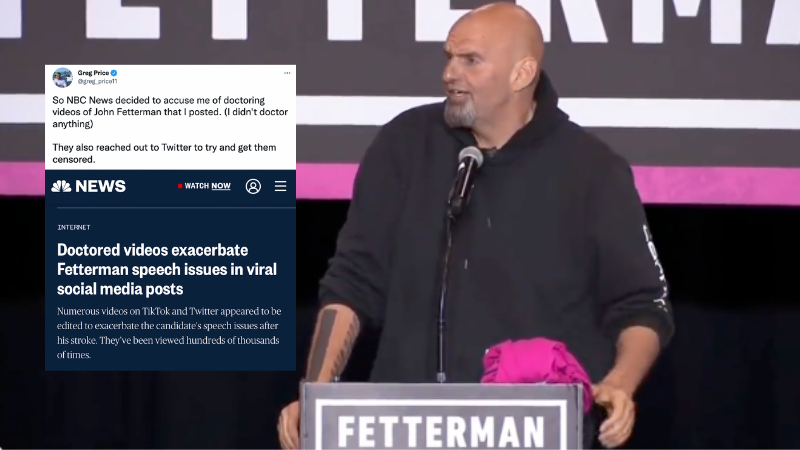 Libby Emmons Brooklyn NY
Sep 15, 2022 minute read
ADVERTISEMENT
ADVERTISEMENT
NBC News went after a conservative digital strategist who posted videos show Pennsylvania Lt. Governor and Senate hopeful John Fetterman having trouble speaking while on the campaign trail. NBC accused Greg Price of doctoring in the videos, when in fact the speech issues exhibited by Fetterman are likley the affer effects of a stroke he suffered earlier this year.

Price put together a supercut of Fetterman having difficulty stringing words together to form coherent sentences, but for NBC, the real issue is not whether Fetterman is healthy enough to serve his constituents, but accusing Price of "doctoring" the images. NBC was so concerned about this they asked Twitter to censor Price.

"Doctored videos exacerbate Fetterman speech issues in viral social media posts," NBC's headline read. They went on to say that "Numerous videos on TikTok and Twitter appears to be edited to exacerbate the candidate's speech issues after his stroke."

Fetterman does have speech issues after his stroke. That stroke kept him in the hospital for days, and kept him off the campaign trail. His wife even stepped in for him on the debate stage when he was not well to speak to voters, or the other candidates, himself.

In their article, NBC notes that they reached out to Twitter about allowing the videos to remain on the platform, and that TikTok removed the videos after NBC alerted them to their existence. "Twitter did not immediately respond to requests for comment," they wrote. "TikTok removed the videos that were flagged to the company by NBC News citing the company's 'integrity and authenticity' policy, which includes misinformation."

As they were writing their article, NBC reached out to Price to ask for comment on the supercut video, which was a compilation of moments from a stump speech during which Fetterman appeared to be struggling. In response to the request, Price suggested that NBC was simply trying to prop up their preferred candidate in the PA senate race. NBC declined to print the full comment.

“Imagine calling yourself a journalist and spending your time trying to censor me and claiming a supercut video I edited together on iMovie was 'doctored' in order to cover for the obvious health issues of a politician," Price told The Post Millennial. "That’s NBC News for ya."

Fetterman suffered a stroke in May and was rushed to the hospital. Fetterman posted to Twitter, alerting constituents as to his condition. He had surgery and was fitted with a pacemaker that has a defibrillator. His campaign said at the time that "John Fetterman is about to undergo a standard procedure to implant a pacemaker with a defibrillator. It should be a short procedure that will help protect his heart and address the underlying cause of his stroke, atrial fibrillation (A-fib), by regulating his heart rate and rhythm."
ADVERTISEMENT
ADVERTISEMENT
fetterman nbc price