The three women interviewed about their experiences growing up female, believing that they could find happier lives by using medical technology to try to be male, each offer compelling testimony. 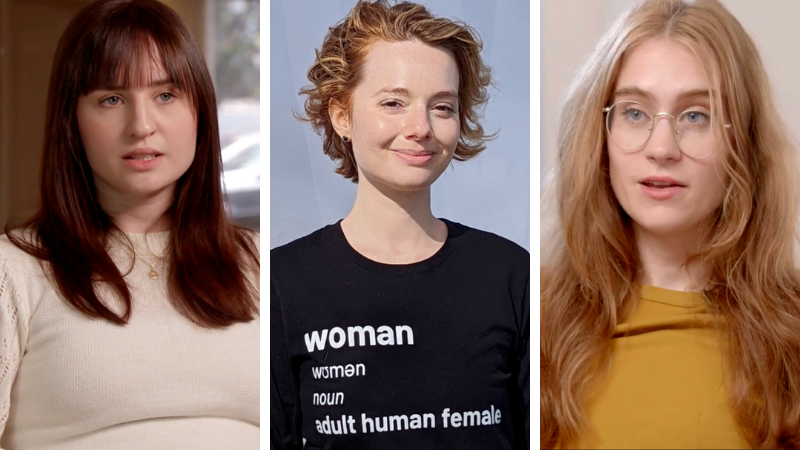 Libby Emmons Brooklyn NY
Sep 28, 2022 minute read
ADVERTISEMENT
ADVERTISEMENT
The fight over gender ideology has made its controversial way to schools, courts, legislatures, and hospitals. The harm done to children, women, and their rights to autonomy for years has continued for years under the guise of compassion. As factions form and people dig in their heels on either side, it's easy to forget the people who have been intimately affected, harmed, and their lives unalterably changed in unwelcome ways.

The Detransition Diaries: Saving Our Sisters, is a new documentary that listens to young women who went through medical gender transition, with cross-sex hormones and surgeries, and came to regret it. The three women were interviewed about their experiences growing up female, believing that they could find happier lives by using medical technology to try to be male, with each offer compelling testimony.

Experts in education, medicine, and psychology have used institutions, organizations, and activism to convince much of the American public that it's possible to change sex. Social media and advocacy groups online use concepts of affirmation, celebration, and pride to convince children and adolescents that gender transition solves problems of awkwardness, feeling like an outsider, and feeling uneasy and uncomfortable in their own bodies.

This is what happened to Helena Kerschner, Cat Cattinson, and Grace Lidinsky-Smith. They were courted into a gender cult that promised them they could become men. They were lured by promises of belonging, confidence, acceptance, and what's become known as the concept of gender euphoria, where the alignment of gender and mind produces a feeling of total concurrence and perfection.

Kerschner's experience was one of essentially having her personal troubles ignored by the people in her life until she found acceptance in an online trans community. When she told the authority figures in her life that she was trans, they "bent over backwards" to affirm and support her. This support did not exist prior to her coming out.

Kerschner liked the increased social standing that came with being trans, she was elevated in her newfound community. She took testosterone for 17 months and experienced incredibly negative side effects.

Lidinsky-Smith speaks in detail about how she came to believe that her life would be better if her breasts were removed, and then once the surgery was completed, she had intense regret. She had body issues, like so many girls have as they enter womanhood, and she thought that it would help to take testosterone and surgically alter her body.

It was only after the fact that she realized there was "no light at the end of the tunnel," that her body was irrevocably changed and it hadn't resulted in the happiness she'd hoped for.

Before she transitioned, Cattinson had an eating disorder, as well as alcohol and drug issues, she'd also been institutionalized and dropped out of college. It was then that she called Planned Parenthood. She "thought there would be at least some kind of process to get the hormones or you know, just some kind of psychological evaluation."

Instead, she was on testosterone after a 30-minute phone call. She lost her singing voice. Planned Parenthood also gave her a letter to facilitate surgical breast removal, known in the gender identity movement as "top surgery," after only a 45-minute phone call.

Each young woman spoke about how they were instantly affirmed by doctors and psychologists. No one in authority positions, no caregivers or doctors, ever encouraged these women to reconsider their course of action, or told them that it's okay to be a girl, or that growing up is hard, becoming a woman is not easy, and feeling comfortable in your body is not necessarily accessed through drugs and surgical alterations to healthy bodies.

It's attractive, this idea that you can change your body through medical alterations, tell people that you're someone different, and have them treat you that way. But it's a lie.

Director Jennifer Lahl is an advocate for women and girls, and Detransition Diaries includes footage and speakers from a past event where she invited outspoken women to address the problems of gender ideology, and how it's harming girls and young women. Kellie-Jay Keen, Natasha Chart, Beth Stelzer, and this writer each spoke on how gender equality harms women and girls.

While gender transition had been most visible among boys who sought to transition, girls have come to make up a bulk of the transitioners in recent years. A recent analysis showed that transitioning is most popular among teens and young adults. between 2017-2020, 1.4 percent of teens between the ages of 13 and 17 identified as trans, while 1.3 percent of those from 18 to 24 did so. Only .5 percent of adults identified in this way.

Additionally, in 2018 it was found that there was a 4,000 percent increase in girls identifying as trans. When people questioned whether or not some of this could be due to social contagion, trendiness, or dissatisfaction with facing womanhood or going through puberty in general, those people were roundly derided as hateful.
ADVERTISEMENT
ADVERTISEMENT
detransition diaries