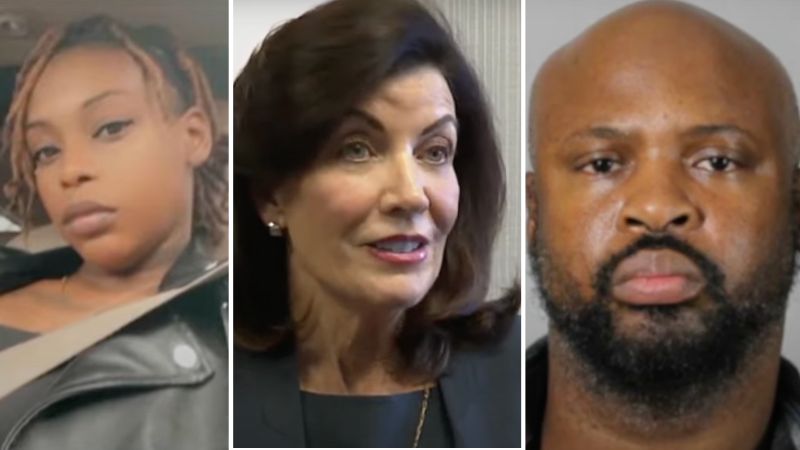 The family of a slain upstate New York mom-of-three are considering suing Governor Kathy Hochul and local authorities as the woman was allegedly killed by her ex-boyfriend less than a day after he was put back on the streets via cashless bail.

The family's lawyer, John Froman, told the New York Post, "The family feels authorities dropped the ball here, resulting in a heinous violent act and the murder of a daughter, sister and grandchild."

On October 30, 30-year-old Keaira Bennefield was taking her children to school when her estranged husband, Adam Bennefield, allegedly shot her execution style after an ambush.

Adam Bennefield was arrested less than a day before the murder on a handful of misdemeanors over his harassment of Keaira Bennefield. She filmed on Facebook an attack he allegedly perpetrated on her on September 28.

The incident was so severe she told Cheektowaga Police, "I thought I was going to die."

Adam Bennefield was charged with third-degree assault, fourth-degree criminal mischief, second-degree menacing, and second-degree unlawful imprisonment and was back out on the streets after receiving no bail.

"If bail reform was not in place, this individual would have never been released," Froman said of the incident.

Adam Bennefield had a prior conviction for kidnapping a different ex at gunpoint.

Keaira Bennefield had begged police and authorities for help before her murder. He was charged with second-degree murder after reportedly gunning the mom down in front of her kids.

"Bennefield pleaded not guilty to murder, aggravated criminal contempt and three counts of endangering the welfare of a child during his Oct. 21 arraignment," according to the Post.

Froman is weighing his options for a wrongful death suit that could extend past Adam Bennefield to include local law enforcement and possible state authorities, such as Kathy Hochul.

Speaking to local news about this case, Hochul said of changing cashless bail laws, "I don't think that's the answer."

Froman has said that, "Policing authorities had evidence that wasn’t shared with the DA’s office that would have resulted in him (Adam Bennefield) being remanded."

The lawyer also said the family are, "encouraging Hochul to sign the Grieving Families Act which is sitting on her desk," which would add financial damages to families victimized by criminals out on cashless bail.

Overall crime is up 29 percent across New York City, slightly down from 34 percent over the summer, and has been surging at rates as high as 50 percent since 2020. Felony assaults in New York are up 17 percent and rapes and robberies are also skyrocketing.
ADVERTISEMENT
ADVERTISEMENT
Cashless_Bail