The New Yorker invited "How To Blow Up A Pipeline" author Andreas Malm on its weekly radio show where the far-left climage change extremist implored the environmental movement to embrace violence. 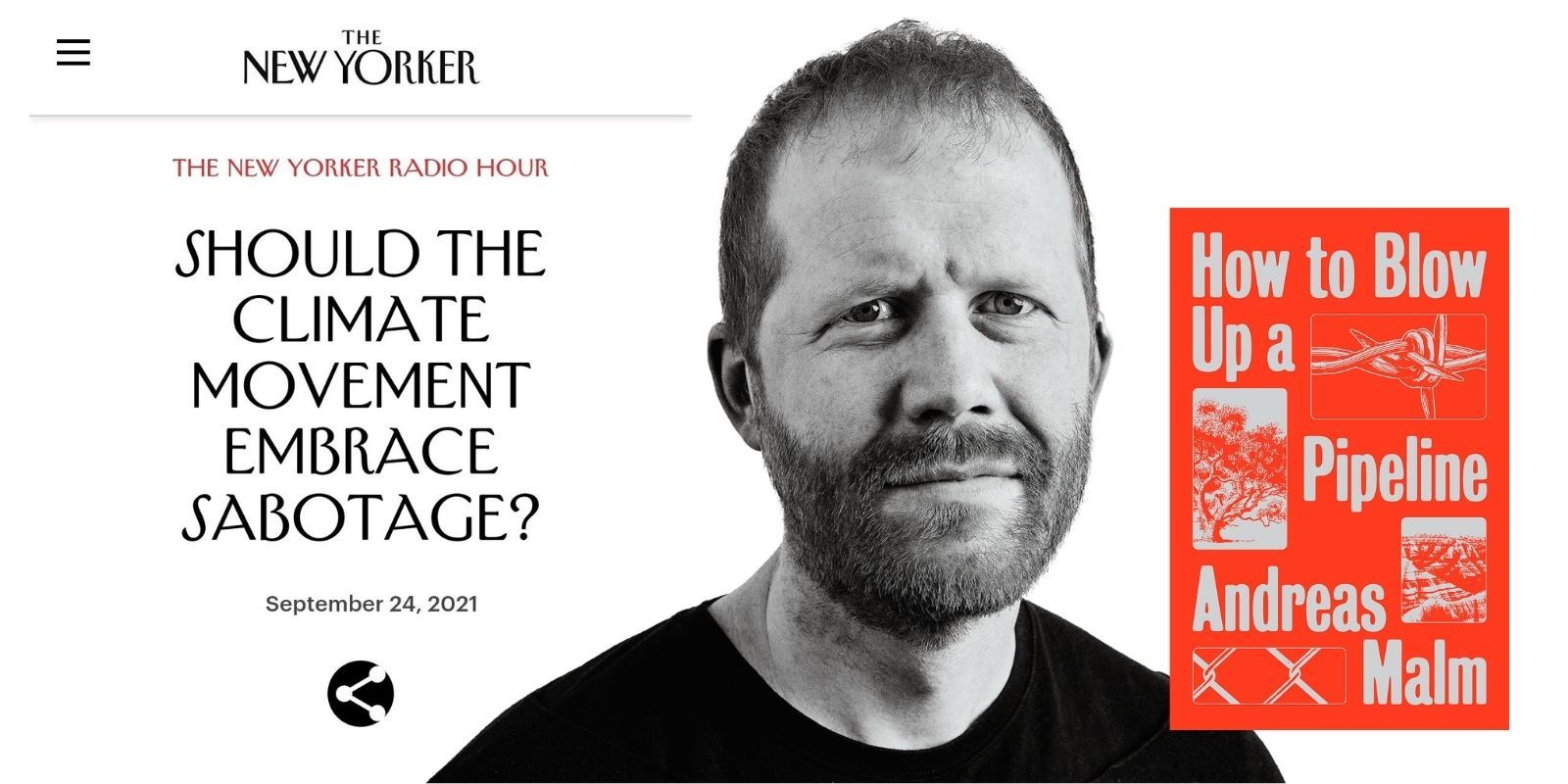 In the name of climate activism, The New Yorker has provided a platform for a far-left environmental extremist on its weekly podcast show.

"How To Blow Up A Pipeline" author Andreas Malm, an associate senior lecturer of human ecology at Lund University, was invited on Friday's episode of The New Yorker Radio Hour, where the professor's impassioned calls for eco-terrorism were amplified by the establishment outlet's radio program.

Pontificating on how to save the planet from the fossil fuel industry, The New Yorker guest implored the environmental movement to embrace violence.

Malm, who sits on the editorial board of the academic journal Historical Materialism, told The New Yorker editor and radio host David Remnick that it's time for the climate change movement to "diversify its tactics and move away from an exclusive focus on polite, gentle, and perfectly peaceful civil disobedience."

While he "wouldn't recommend" kidnapping oilworkers, Malm, a described Marxist, defined "civil disobedience" in the 20-minute segment as mass acts of "intelligent sabotage" and "property destruction," such as exploding pipelines.

"I'm not saying we should stop strikes or square occupations or demonstrations of the usual kind. I'm all in favor of that," Malm stated, before echoing the book's central claim. "But I do think we need to step up because so little has changed and so many investments are still being poured into new fossil fuel projects."

Malm said he's "in favor of destroying machines, property" but not harming people, which is "a very, very important distinction there," he noted.

"And I think property can be destroyed in all manner of ways, or it can be neutralized in a very gentle fashion as when we defeated the SUVs, or in a more spectacular fashion, as in potentially blowing up a pipeline that's under construction. That's something that people have done," Malm stated.

Remnick confirmed, "So you're recommending blowing up a pipeline."

Malm attempted to justify the violence by claiming that the purported moral pros of combatting the "climate crisis" outweigh the ethical cons.

"I don't see how that property damage could be considered morally illegitimate, given what we know of the consequences of such a project," Malm said.

Malm pledged "to be part of any kind of action of the sort" that he advocated in his book. Remnick's guest then castigated the climate change movement's "dogmatic commitment" to nonviolent protest that he said is "based on a faulty history writing or understanding of social struggles over history."

The Swedish author went on to say that nonviolent demonstration is founded on the idea that "the only thing that has ever worked for social movements is to stay completely peaceful and that just isn't the case," Malm argued.

"I don't think that anyone could seriously argue that the BLM movement in 2020 would have achieved more if there had been no confrontations, no windows smashed, no police stations or cars burnt," he said, calling it "a fantasy scenario."

Vox co-founder Ezra Klein tried to excuse Malm's repeated suggestions for terrorist bombings of oil pipelines in a July 15 column titled, "It Seems Odd That We Would Just Let the World Burn," for The New York Times.

After reading Malm's book—which is not an explicit DIY guide—Klein wrote, "You won't find, anywhere inside, instructions on sabotaging energy infrastructure."

"A truer title would be 'Why to Blow Up a Pipeline.' On this, Malm's case is straightforward: Because nothing else has worked," Klein penned.

"Decades of climate activism have gotten millions of people into the streets but they haven't turned the tide on emissions, or even investments," Klein stated, explaining why climate activists resort to violent crime.

Klein articulated why an environmental militant would bomb infrastructure such as oil pipelines, maintaining that it's because the "climate crisis" is so dire.

"Still, violence is often deployed, even if counterproductively, on behalf of causes far less consequential than the climate crisis. So skepticism of the practical benefits of violence does not fully explain its absence in a movement this vast and with consequences this grave," The New York Times columnist wrote.

Malm's published manifesto sneered at decades of appeals and petition campaigns. "With the stakes so high, why haven't we moved beyond peaceful protest?" he wrote. Malm, a "saboteur of SUV tires and coal mines," urged the climate change movement to "escalate its tactics in the face of ecological collapse."

He insisted in the writing that the "strategic acceptance of property destruction and violence has been the only route for revolutionary change."

Malm wrote in the book that "millions" of climate activsits should "[d]amage and destroy new CO2-emitting devices. Put them out of commission, pick them apart, demolish them, burn them, blow them up. Let the capitalists who keep on investing in the fire know that their properties will be trashed."

Klein only argued against bombings as "counterproductive" to the cause, because they'd motivate the public to vote against the environmentalist left.

When asked by Remnick about Klein's additional concern that poor communities would be harmed by eco-terrorism on energy infrastructure, Malm tried to vindicate the crime during The New Yorker interview.

"If you engage in property destruction that causes such disruption to prices, you run a risk of alienating people, but I think that if people go about this in a careful fashion, and if they time property disruption of this sort to moments when the impact of the climate crisis are being felt, there would be a decent chance to also gain popular support for these kind of actions," Malm said to Remnick.

Remnick questioned how Malm would avoid "playing into the eco-terrorism narrative" constructed by Fox News. "Well, I don't think that we should adapt our tactics after the enemy's script," Malm told Remnick.

Critics have since lambasted The New Yorker for "endorsing" or venturing to "normalize" political violence for climate change into the mainstream discourse.

"I think it's weird that guys who don't own any guns and certainly don't know how to use them seek to normalize political violence. I wonder if they'll act surprised," Townhall.com senior editor Kurt Schlichter tweeted.

Spectator contributor Stephen Miller commented: "For those keeping track at home, both the New Yorker and the New York Times are debating and soft endorsing terror acts against national pipelines in the name of climate."

Miller added that the corporate media's regurgitated "attacks on democracy" rhetoric in the wake of the Jan. 6 riot should be laid to rest if they're "endorsing the merits of domestic acts of terror against pipelines."

"A high level Biden nominee was part of a group that mutilated loggers in the Pacific Northwest in terrorist attacks and the GOP didn't seem to mind at all," political commentator Mike Cernovich remarked on Twitter, referring to President Joe Biden's pick to lead the Bureau of Land Management, "anti-government" Biden nominee Tracy Stone-Manning, who was under investigation for a 1989 tree-spiking, logging sabotage plot in Idaho.

The New Yorker published a piece in defense of leftist violence last year, running Antifa propaganda ahead of the 2020 presidential election. The magazine printed the expose on Oct. 25, defending Antifa militants as community protectors and affirming that "confronting fascists with violence can be justified."