Jerry Nadler said in a recent interview that the riots which have raged for Portland, Oregon at the hands of Antifa and BLM protestors for the last two months are "a myth." 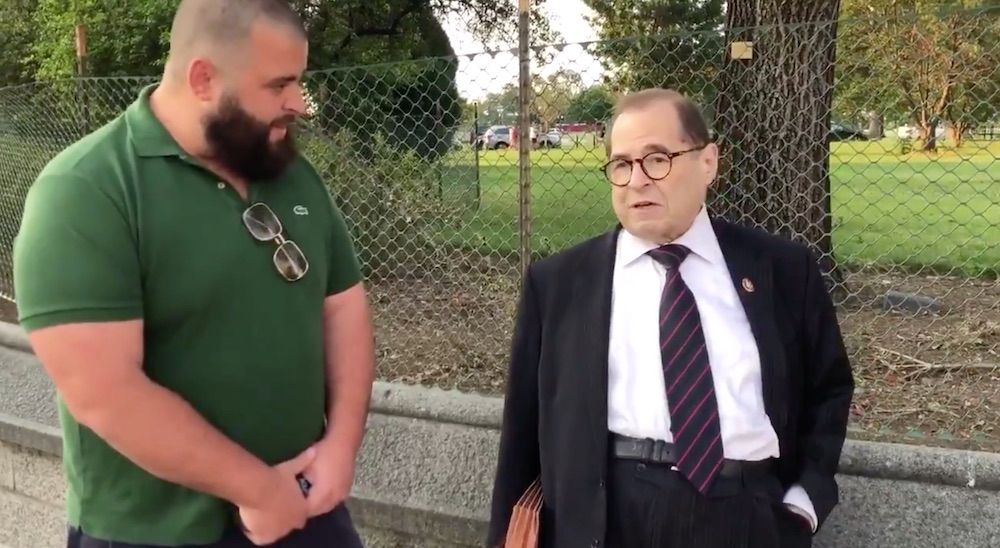 New York Representative Jerry Nadler (D-NY 10th) said in a recent interview that the riots which have raged for Portland, Oregon at the hands of Antifa and BLM protestors for the last two months are "a myth" being spread in Washington, DC.

This despite the fact that the Department of Homeland Security wrote on July 24 that "The situation in Portland for the past 55 straight days, continues with violent anarchists rioting on the streets of Portland as federal law enforcement officers work diligently and honorably to enforce federal law; they do so by defending federal property and the lives of their fellow officers."

Austen Fletcher, who speaks on Twitter as Essential Fleccas, posted the interview with Nadler on Sunday evening. "I ran into Jerry Nadler in DC and asked him to disavow the Antifa violence/rioting in Portland. His response? 'THATS A MYTH.'"

Fletcher started by insisting that "there is violence across the whole country. Do you disavow the violence from Antifa that's happening in Portland right now?"

Nadler promptly responded by saying "that is a myth that is being spread only in Washington, DC."

Fletcher, confused, confirmed for clarification that the myth of Antifa violence in Portland is only a myth spread in Washington, DC. Nadler doubled down by confirming that this is precisely what he meant.

Nadler's position that Antifa is not real is something he has managed to keep consistent, with Fox News reporting in late June that Nadler said the extremist group was imaginary during a "debate in the House of Democrats' proposed police reform legislation."

"They couldn't utter the phrase 'black lives matter' and could barely [broach] the subject of police reform," Nadler said of Republicans in the House. "Instead, their amendments ... were errant nonsense, off-topic, dealing with imaginary things like Antifa and completely negating the entire purpose of the bill."

Representative Jim Jordan (R-OH 4th), responded to Nadler's statement last month by suggesting that people speak to people like Andy Ngo who have been beaten and assaulted at the hands of Antifa.

Jordan said that "[Antifa] are far from imaginary, and there are people from every major city in this country who know that, and yet the Chair of the Judiciary Committee just made that statement..."

Fletcher's interview with the seemingly oblivious Nadler comes as destruction and mayhem have ravaged the city of Portland for two months. Federals officers have been blinded, Trump supporters were stabbed, and businesses have been unequivocally destroyed.