"While the agents waved their reins while pushing migrants back into the Rio Grand, The Times has not seen conclusive evidence that migrants were struck with the reins," states the correction. 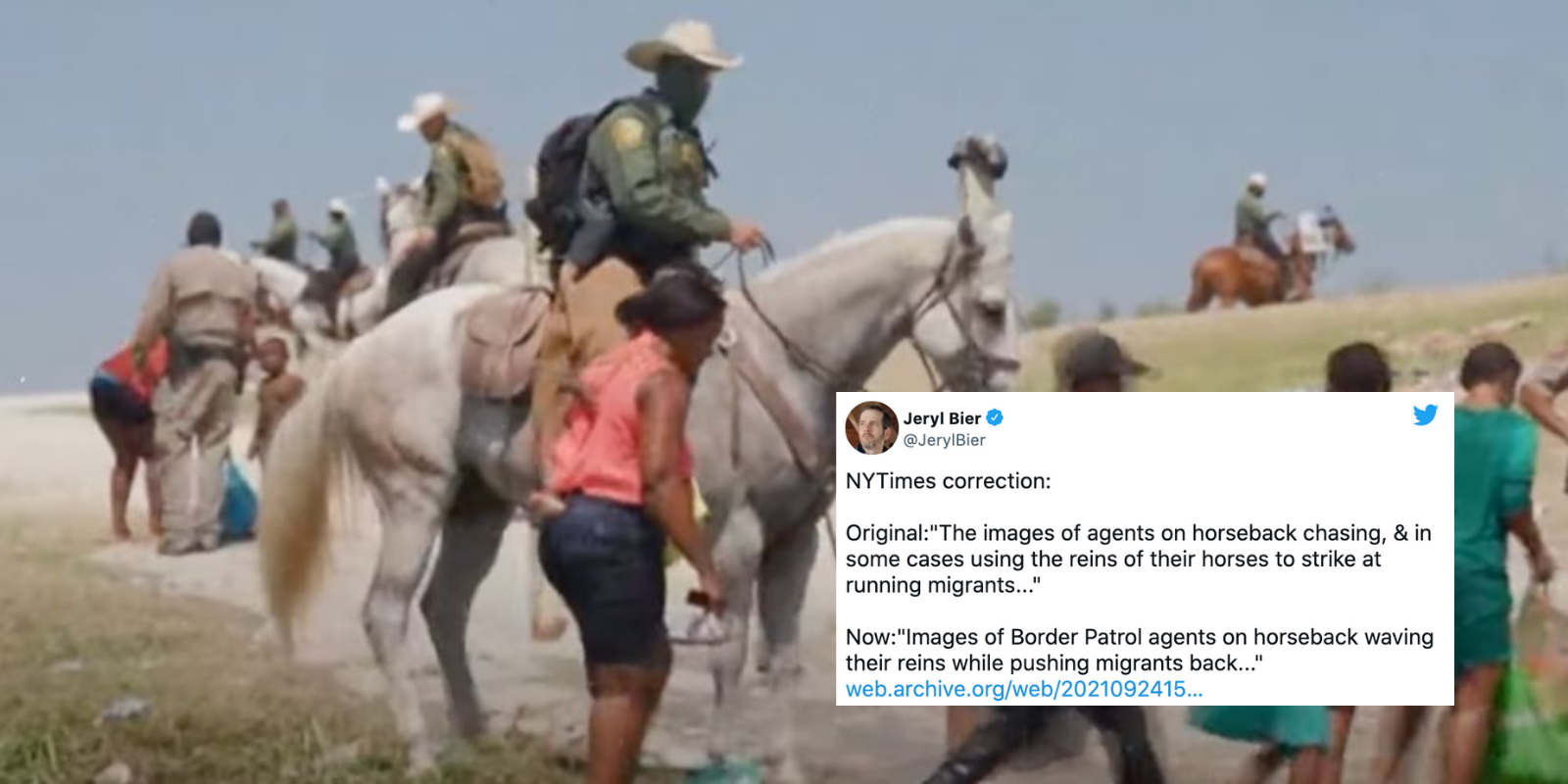 Following photos taken at the southern border depicting Border Patrol agents on horseback that many mistakenly said were whipping Haitian migrants attempting to cross the Rio Grande, the New York Times has issued a correction in their article where they accused the agents of doing that.

President Joe Biden, Vice President Kamala Harris, White House Press Secretary Jen Psaki, and countless media pundits all claimed that border agents were mistreating migrants with use of "whips," or that the migrants were being "strapped." Biden threatened punishment for those border agents, who were actually holding their horses reins, and not using them to strike people.

The Times article, published on Friday, originally stated: "The images of agents on horseback chasing, and in some cases using the reins of their horses to strike at running migrants..."

The article was later changed to the following: "Images of Border Patrol agents on horseback waving their reins while pushing migrants back..."

The outlet issued a correction that day, stating that they had previously "overstated" what actions the Border Patrol agents took. "While the agents waved their reins while pushing migrants back into the Rio Grand, The Times has not seen conclusive evidence that migrants were struck with the reins."

Backlash against the false statement that agents were whipping the Haitian migrants, statements echoed by President Joe Biden who said the migrants were being "strapped," came after the photographer who took the photos set the record straight on what he witnessed that day.

"I didn't ever see them whip anyone with the thing," Paul Ratje said. "He was swinging it, but I didn't see him actually whip someone with it. Those definitely can be misconstrued when you're looking at the picture."

Despite agents being proven to have not struck the migrants, Fox News reported that these agents may still face some sort of punishment for actions they did not commit.

Despite the push for "consequences" from White House officials, senior administration officials told Fox News that "the investigation should produce little more than a suspension of a few days with pay for the agents – and should be a 'non-issue.'"

One source familiar with the ongoing investigation told Fox News that the team of investigators from the Department of Justice are investigating potential civil rights violations in Del Rio.

One senior administration official told Fox News that they believe the agents should only face a possible suspension for several days with pay.

"Those with knowledge of the matter say that investigation could rest on what the agents said, rather than what they did. One agent was filmed saying: 'You use your women? This is why your country's sh*t, because you use your women for this.'" wrote Fox News.

However, the official noted that "yelling at people is not a crime," also adding that the National Border Patrol Council had sent in lawyers and the men are "well represented."