An NDP Member of Provincial Parliament introduced a Private Member’s Bill which seeks to expand coverage for "gender-affirming" treatments such as facial feminization surgery and electrolysis, calling such procedures "life-saving." 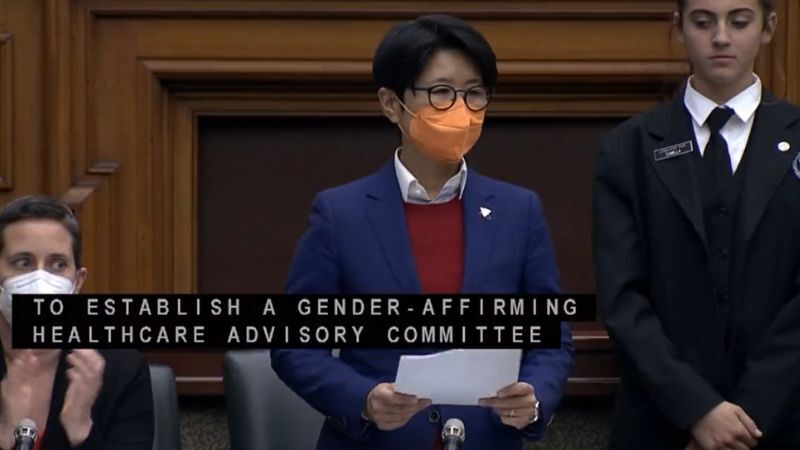 At a time when Ontario’s healthcare system is on its knees, with emergency room wait times at record lengths, thousands of Ontarians without GPs, and people all over the province failing to get even their most basic healthcare needs met, an NDP Member of Provincial Parliament has introduced a Private Member’s Bill which seeks to expand coverage for so-called "gender-affirming” treatments such as facial feminization surgery and electrolysis, calling such procedures "life-saving.”

Kristyn Wong-Tam, who uses they/them pronouns and is the NDP MPP for Toronto Centre, reintroduced The Gender Affirming Healthcare Advisory Committee Act that Wong-Tam’s predecessor, Suze Morrison, had introduced in 2021. The bill seeks the formation of an advisory committee made up of members of the transgender community and sex change healthcare providers that would advise the Ontario government on how best to implement fully funded transition-on-demand care for transgender Ontarians.


One function of this committee of gender-affirming experts would be to advise the provincial government on how to “expand insurance coverage for gender-affirming treatments and transition-related procedures not currently covered under the Health Insurance Act, including affirming facial feminization surgery, ‘chest contouring’ and electrolysis.”

Currently, the province does not cover electrolysis for women suffering from medical conditions such as polycystic ovary syndrome, which results in excessive facial and body hair. Of note, detransitioned women who have facial and body hair from taking testosterone are also not eligible for hair removal coverage by provincial insurance.

Bill 42 also seeks to implement “the informed consent model of transgender care” and “to reduce referral requirements for access to care.”

Informed consent in the general medical setting means the process in which a healthcare provider educates a patient about the risks, benefits, and alternatives of a given procedure or intervention. The Informed Consent Model referred to in Bill 42, however, means the opposite.

This model is a form of gender-affirming care which removes the need for an official diagnosis of gender dysphoria by a mental health professional prior to starting medical transition. Under this model, all that is required to commence medical transition is that a patient sign a consent form to say they understand the risks of a given procedure. No alternative treatment options, such as psychotherapy to avert the need for medical intervention, are discussed.

That the Ontario NDP could propose such a bill now, when so many other nations are reverting back to psychotherapy as the primary treatment for young people suffering from gender dysphoria, is evidence of Canada’s steadfast refusal to acknowledge developments elsewhere in the world.

Sweden and Finland both performed systematic reviews of the evidence for affirmation, puberty blockers and cross-sex hormones for young people and found it to be of such low quality that both nations abandoned the affirmative model of care and now only allow young people to medically transition in the strictest of clinical trial settings.

England is expected to follow suit after an independent review of its gender services found the non-exploratory affirmative approach, such as that proposed in Bill 42, to be harmful to young people and led to the announced closure of the Tavistock gender clinic. In the regional clinics that will replace the Tavistock, there will be a focus on psychotherapy and medical transition will only be available in a clinical trial setting following the Scandinavian model.

The proposed bill also defines “gender-affirming health care” procedures as “live-saving” even though the transition-or-suicide myth has been debunked numerous times.

In a statement to the Post Millennial, Michelle Zacchigna, a detransitioned Ontario woman who was one of the first people to receive care under the affirmative model in the province and is now grieving the loss of her breasts and reproductive organs, expressed her concern regarding the content of the bill.

“Medical transition is an invasive treatment which frequently creates lifelong medical patients. It should be a last resort for people experiencing persistent gender dysphoria when all other routes, including gender exploratory therapy, have been exhausted,” Zacchigna said. “The informed consent model encourages a permanent solution to what could very well be a temporary problem.”

“In trans health care, patients diagnose themselves and prescribe their own treatment. There is no differential diagnosis. Medical professionals are encouraged to accept a person's belief without question under the assumption that it will never change,” the detransitioned young woman continued. “If this were true, irreversible changes as soon as possible makes sense as a primary treatment. However, there is no empirical evidence to support the idea that gender identity is innate and unchanging.”

Zacchigna went on to suggest that “framing gender health care as ‘lifesaving’ without solid evidence is emotionally manipulative behaviour” which could result in more suicides given the fact that suicide is socially contagious. She would also like to see detransitioners included in the advisory committee should the bill pass.