The humane society says the bucket was a large potato chip or candy container. 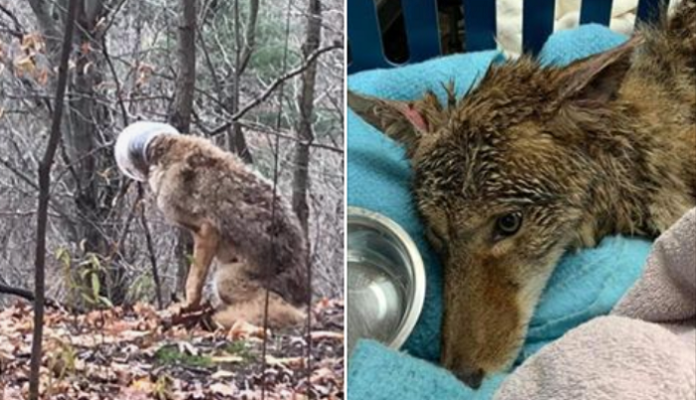 The Oakville and Milton Humane Society has rescued a coyote this weekend from a bucket that animal experts believe had been on its head for well over a week.

The humane society became aware of the bucket-headed animal sometime last Tuesday after it was spotted near Bronte Creek Provincial Park.

Members of the OMHS Animal Services team were able to track down the coyote, eventually removing the plastic object, while recording their noble actions.

The video, posted to the OMHS’ Facebook, has been viewed thousands of times since being uploaded.

The video shows staff approaching the coyote, which appeared afraid and under a tree. The team then placed a towel over the coyote, and moved it to a nearby vehicle.

Rescuers say the animal was malnourished and dehydrated.

The humane society says the object was a large potato chip or candy container, posting a full statement under the video.

“OMHS Animal Protective Services successfully rescued the coyote with a plastic container stuck to its head Monday evening near Bronte Road, north of Speers Road and south of Wyecroft Road. The animal was first reported to the Oakville & Milton Human Society last Tuesday and had been seen in Bronte Creek Provincial Park.”

The OMHS went on to thank the public for their tips that that led to the coyote’s rescue.