Troster, a lesbian who has “been out for more than 20 years” says she has never seen such “horrendous hate … specifically homophobia and transphobia.” She attributed this to the convoy, but failed to provide evidence of a link between the two.

A newly elected Ottawa city councilor tabled a motion Wednesday aimed at addressing “LGBTQ+ hate” which she says has risen in the city ever since the Freedom Convoy protests in January and February this year.

Ariel Troster, a lesbian who has “been out for more than 20 years” says she has never seen such “horrendous hate directed at all sorts of people in public life, but specifically homophobia and transphobia.” She attributed this to the convoy protest but failed to provide any evidence of a link between the two.


As evidence of this rising homophobia and anti-trans hate, she cited the example of pro-women’s rights stickers being found with increasing frequency across the city. Earlier this year, a trans-identified male made it onto the news by going around taking down the stickers bearing the dictionary definition of woman and messages such as Keep Prisons Single Sex, and an Ottawa city councilor even put out a call for witnesses of this supposed hate crime to contact the police.

Further evidence given by Troster of Ottawa’s homophobia and transphobia was a protest staged by child-safeguarding advocate Chris Elston, aka Billboard Chris, who stood peacefully outside a school with two members of the public, holding signs reading Children Cannot Consent to Puberty Blockers, and No Child is Born in the Wrong Body. Elston and his fellow protesters were swarmed and assaulted by an angry mob chanting “protect trans kids.”

Elston and a group of protesters were present with the same signs at the Freedom Convoy trucker protests in January of this year, prompting Prime Minister Trudeau to condemn the transphobia of the Canadians assembled to protest the vaccine mandates. But no one was able to answer what was transphobic about the messages on the signs. 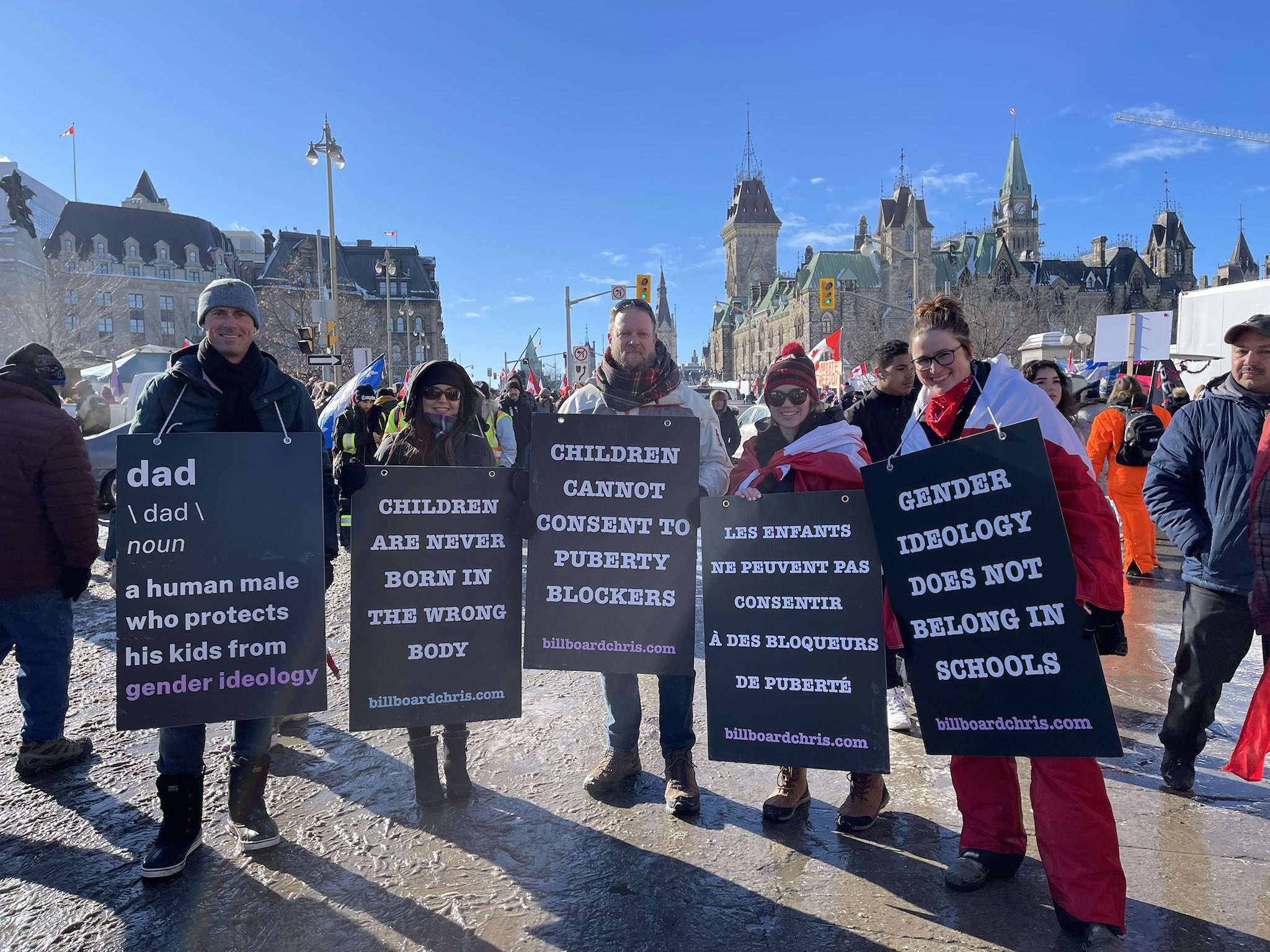 Troster also mentioned Ottawa-based Shopify’s refusal to remove the merchandise of Libs of TikTok, an account that amplifies the social media content of the more extreme left as a way to warn people about the dangerous ideas youth are being exposed to. As well, Troster included protests outside “family-friendly” drag queen story time events and one held recently outside a school in Renfrew where students took to the street to demand that girls have the privacy of female-only washrooms.

Troster didn’t offer many concrete solutions to all this alleged hate taking place in the city, but did ask that the council back the recently tabled Ontario Bill 42, which is the Gender Affirming Healthcare Advisory Committee Act that seeks to make cosmetic procedures such as facial feminization surgery for trans-identified males fully covered by provincial health insurance, and also aims to create a transition-on-demand form of gender-affirming care that fast-tracks gender-confused youth onto the medical transition pathway at a time when many other countries are reverting back to a more cautious approach to treating young people with gender dysphoria, and malpractice lawsuits are starting in which detransitioners are suing the doctors who failed to adequately address their mental health needs before allowing them to consent to medical transition.

When Troster was done, Councilor Stephanie Plante seconded the motion, and recounted the story of how she was a surrogate for two gay friends and how she wants the child she gave birth to grow up in a world that accepts families like hers. Plante also said she would like to make parenting “more accessible and gender-neutral” after describing the difficulties the gay couple had with the child’s birth certificate requiring the information of the mother and the father.

The City of Ottawa unanimously passed the motion.