The call for the "night of rage" came after an Antifa activist was shot and killed after allegedly opening fire on police officers trying to clear an autonomous zone. 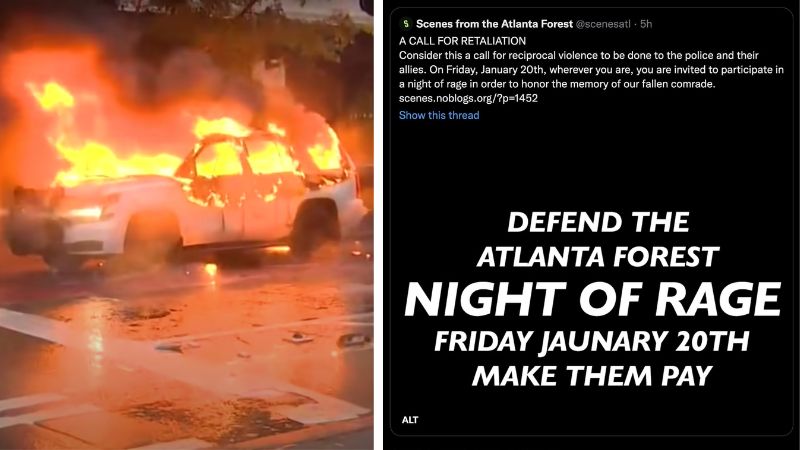 Following the fatal shooting of a militant who was part of an Antifa-aligned group occupying a stretch of land south of Atlanta, Atlanta police say they're on "high alert" for a so-called "night of rage."

The Scenes from the Atlanta Forest Twitter account was suspended on Thursday after calling for a "night of rage" following the fatal shooting of one of their members, 26-year-old Manuel Esteban Paez Teran, after The Post Millennial's Andy Ngo reported on the call for action.

Paez Teran was killed by police after he allegedly shot an officer who was part of an operation clearing out the Antifa-occupied autonomous zone dubbed "Cop City," where the Atlanta Police Department Training Facility is set to be built.

"Our officers are on high alert, and we will continue our work to keep our streets safe for our residents, businesses, and visitors alike." Atlanta police said in a statement Thursday, according to WSB-TV. "We remain in close contact with our local, state, and federal law enforcement partners and are grateful for their commitment to our shared goal of creating the safest communities possible for our city."

Local news reports that the account was suspended by Twitter for violating their community guidelines. The original tweet from the account, posted Wednesday, read "Consider this a call for reciprocal violence to be done to the police and their allies. On Friday, January 20th, wherever you are, you are invited to participate in a night of rage in order to honor the memory of our fallen comrade."

Georgia Department of Public Safety Colonel Chris Wright said that protestors allegedly fired a shot and hit an officer, to which officers returned fire and killed the suspect. The unidentified officer is in stable condition. The shooting took place during a "clearing operation" around 10 am near the Antifa-linked autonomous zone. After the incident, the Antifa activists, who have been dubbed "Treehouse Antifa," took to the streets.

The Post Millennial Editor-at-Large Andy Ngo reported of the "night of rage" on Twitter and wrote, "Breaking: Far-left groups are calling for deadly vengeance against police as payback for one of their comrades getting shot dead near the #Atlanta autonomous zone. They link to their list of @ga_dps officers & other cops they want to be murdered. #Antifa"

While the Scenes from the Atlanta Forest account was suspended, other accounts calling for deadly violence as an act of revenge remain active.