The Biden administration is on the warpath against conservative journalists like Project Veritas, and it's using the Department of Justice to carry out its bidding, alleges civil rights lawyer Harmeet Dhillon, who's representing the outfit in its First Amendment fight against the DOJ. 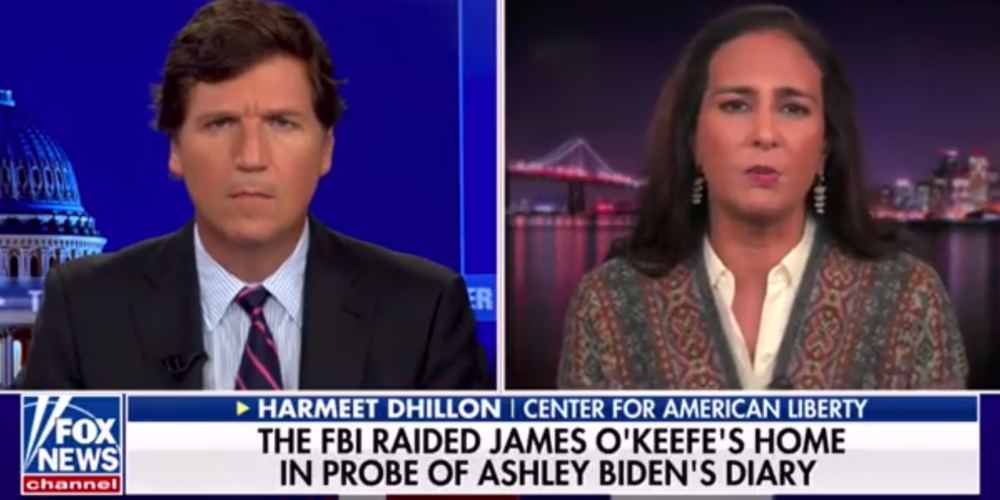 The Biden administration is on the warpath against conservative journalists like Project Veritas, and it's using the Department of Justice to carry out its bidding, alleges civil rights lawyer Harmeet Dhillon, who's representing the outfit in its First Amendment fight against the DOJ.

The Department of Justice is investigating journalists at Project Veritas for acquiring Ashley Biden’s diary, which reportedly contained “creepy” details written by President Biden’s daughter about her father. The existence and possession of that diary has become a matter of prosecutorial inquiry, prompting the DOJ to go after Project Veritas founder James O’Keefe and others who came in contact with the document.

As reported by The Post Millennial in November, the FBI raided two homes associated with Project Veritas in connection to the diary.

“This is a country in which the FBI is acting as Joe Biden’s personal family police department,” remarked Fox News host Tucker Carlson in a segment on the actions being taken by the DOJ.

“This federal investigation smacks of politics. Project Veritas never threatened or engaged in any illegal conduct. Should the Southern District of New York try to take away our First Amendment rights to uncover and publish newsworthy stories without government intimidation, be assured Project Veritas will not back down,” said O’Keefe in a statement.

Civil rights attorney Harmeet Dhillon, the founder and CEO of the Center for American Liberty, joined Carlson to discuss the matter.

“This is an absolutely breath-taking situation where the United States Department of Justice supposedly because of this diary,” said Dhillon.

“But I’ll tell you why – I don’t think it’s really about the diary – has ignored the First Amendment, which protects the rights of journalists and the press and of course donors and is also ignoring a federal statute – the Privacy Protection Act that protects journalists and confidentiality and is also ignoring DOJ guidelines passed as recently as this summer by the current Attorney General Merrick Garland all of which are designed to protect journalists from exactly this type of raid.”

“So how are they getting around that? They’re claiming that Project Veritas, in court filings, are not in fact journalists, and that’s one of their reasons,” Dhillon continued. “But this diary was published not by my clients Project Veritas but by some other outfit over a year ago. The DOJ well knew that our client didn’t have the diary. What were they really after?”

“I think they were really after Project Veritas’ telephones, with contacts of lawyers and legal communications, contacts of many, many sources in the Biden administration, which is riddled with corruption as you’ve pointed out, and contacts of conservative donors who they’d like to harass, and they have the playbook from the Obama years.,” she said. “That’s what this is about.”

“And so now we have different stories being spun in the media. You see Rachel Maddow coming out and claiming Project Veritas asking for a comment from the Biden campaign or they’ll run the story without the comment is a form of extortion,” continued Dhillon. “And you’ll have sage journalists nodding along from Politico saying ‘yes, yes, this could be extortion.’”

“I mean, Tucker, I was a journalist before I became a lawyer and I committed those ‘acts of extortion’ on a daily basis and now that I’m a person who the press calls I get extorted every day by publications including the New York Times, Politico and others,” Dhillon quipped. “So this is nothing more than a political witch hunt that is targeted at conservative donors, conservative journalists, people exposing corruption. The diary is simply the hook to get into this.”