Mythinformed MKE posted clips from that conversation on Twitter, and had their account temporarily suspended pending deletion. The social media giant said the video violated their "rules against posting private media." 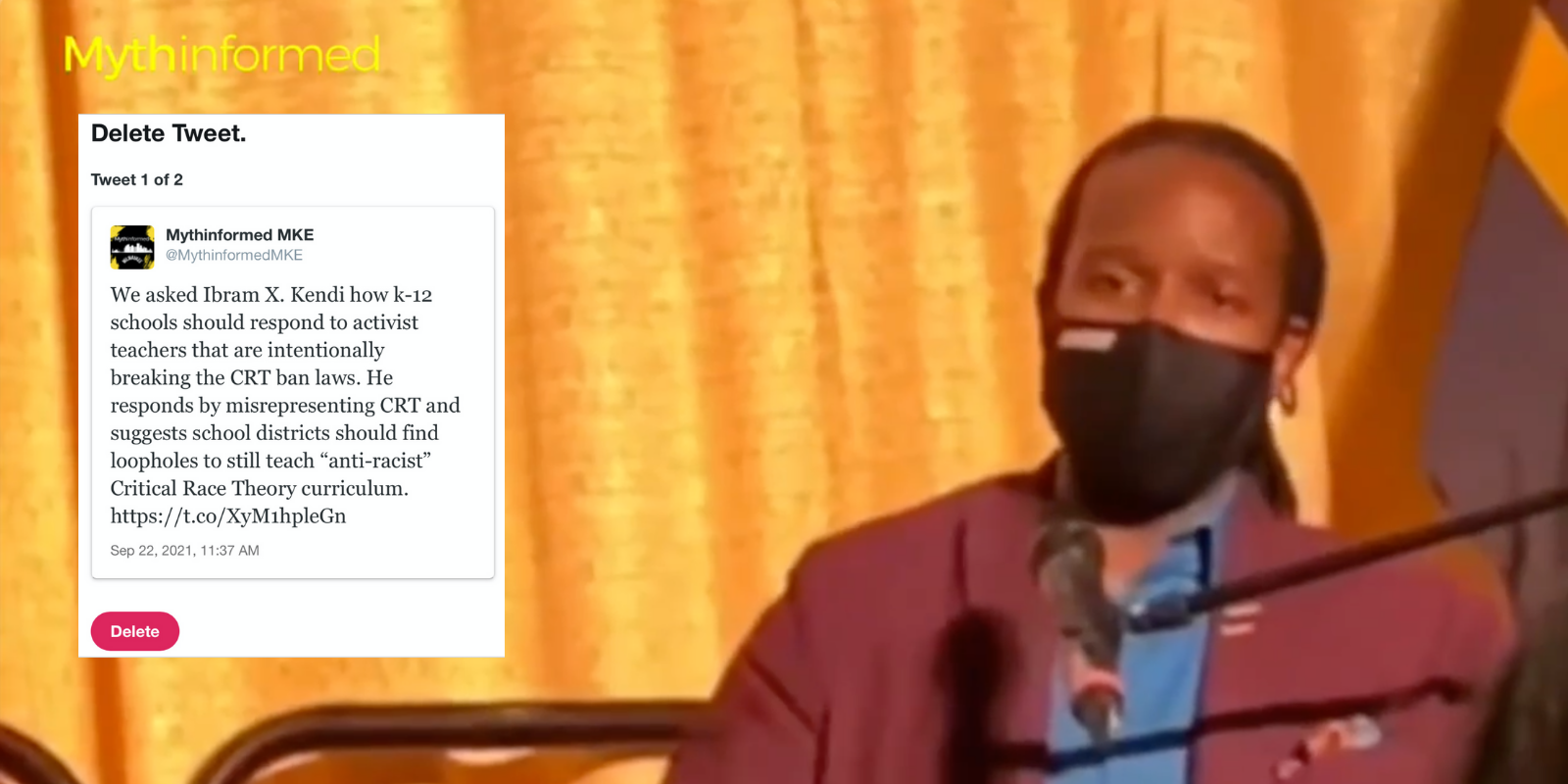 Mythinformed bought tickets to an Ibram X Kendi speaking engagement at the University of Wisconsin, where they recorded the event's question and answer period. They adhered wholly to the posted rules of the venue.

Mythinformed posted clips from that conversation on Twitter, and had their account temporarily suspended pending deletion. The social media giant said the video violated their "rules against posting private media." It was unclear what made this media private.

The tweets Mythinformed was asked to delete both included video footage from the event. The first said plainly they asked a question during the Q&A portion of the talk. Their question to Kendi was how K-12 "schools should respond to activist teachers that are intentionally breaking the CRT ban laws."

"Many states are now passing legislation banning anti-racism curriculum. And some teachers are, you know, on social media or whatever come out there saying they're actively working against that and breaking the law intentionally. How do you think school districts, K-12 school districts, should handle this?" MythinformedMKE asked Kendi.

"So let me be specific," Kendi said. "So I think first school districts should read the 'laws' very carefully because many of these laws were written similarly, but there are some slight differences. And so if it's in a state, where pretty much the law says, 'the education should not teach that a particular racial group is inherently evil and racist,' it should not teach— like those things along those lines, then you can continue as it is. We're not training that people are inherently evil and racist."

"But if it says things like a student should not feel bad because of their race,' then I would institute anti-racist education," Kendi continued. "And then when the state comes down and says, 'What are you doing?' I'd say, well, students of color felt that about a race with that old education. I think it depends on specifically the way the laws are written. But I think in a broader sense, I think people have to organize."

Twitter responded that they "have determined that this account violated the Twitter Rules. Specifically for violating our rules against posting private media." They further wrote that "As a result, we have locked your account."

The terms are familiar to anyone who has watched this battle rage on the social media platform. To "unlock" the account, MythinformedMKE must delete the tweets.

MythinformedMKE appealed the decision, but if the appeal fails, they will likely delete it to get access to their account back.

The second video addressed concerns about vaccine mandates and vaccine hesitancy in the black community.

"The question and I think I'm understanding it correctly, that any policy or potential policy that would have a disparate racial impact is a racist policy," MythinformedMKE asked. "So if that's correct, then would vaccine mandates that disproportionately affect people of color, would that be a racist policy?"

Kendi continued: "But what I will say is, to me, the actual problem isn't the vaccine mandates. The actual problem is when you actually study those, particularly black and Latinx people who aren't vaccinated, you actually talk to them. We're finding that a lack of accessibility to the vaccine for a whole host of reasons is actually leading to them having a lower rate. At the same time, with white Americans, it's more or less the result of their political ideology.

Mythinformed was reached for comment about the matter and said, "Our organization promotes viewpoint diversity. We paid $24 to attend a public event with Ibram Kendi at UWM. After he spoke for 40 minutes, they offered the chance for the 'community' to ask questions."

"Since Ibram Kendi so rarely gets challenged on his viewpoint, we respectfully asked questions on the topics we felt the most pertinent. We give him credit for fielding such questions and answering them. We then posted these two questions and answers on our Twitter account @MythInformedMKE, and within hours they had been removed by Twitter for violating their 'private media' policy," Mythinformed told The Post Millennial.

"We appealed as their private media policy concerns itself with sharing of private personal information, doxing, and non-consensual nudity... none of which we violated," they said.

"What's weird is: Twitter is famous for people's inability to contact personnel there. This difficulty doesn’t apply to the universities, as they presumably contacted Twitter to have the tweets removed. We guess that they didn’t like the criticism their prized speaker brought on Twitter after the clip reached close to 100k views and many criticisms of Kendi’s viewpoint," MythicistMKE said.

The suspension was noticed by many on Twitter who anticipate and expect media from MythinformedMKE showing the truth about critical race theory and that theory's practitioners. The group, which hosts the annual event Better Discourse, coming up in November in Fort Worth, Texas (full disclosure: the author will be speaking at the event), has become a go-to account for anyone looking to debunk, discredit, and expose the lies that underscore the concept of anti-racism when it is underpinned by critical race theory.

The venue's rules listed a series of rules, none of which specified that the event could not be filmed or shared.

Known as CRT by many of its critics, it espouses that every current and historical event be looked at through the lens of race and racism. In practice, and in many cases, this is not discussed as part of theoretical conversation in which many lenses of critical theory are used, but is instead installed as a pedagogical backbone of curriculum from the lower grades straight on through graduate level course work.

MythinformedMKE has been working to expose this and to show that what appears on its surface to be simply a matter of educating children and adults to believe in the value of equality is actually a system of indoctrination that instills hate, fosters division, and focuses on equitable outcomes to the thorough and complete exclusion of equality itself.